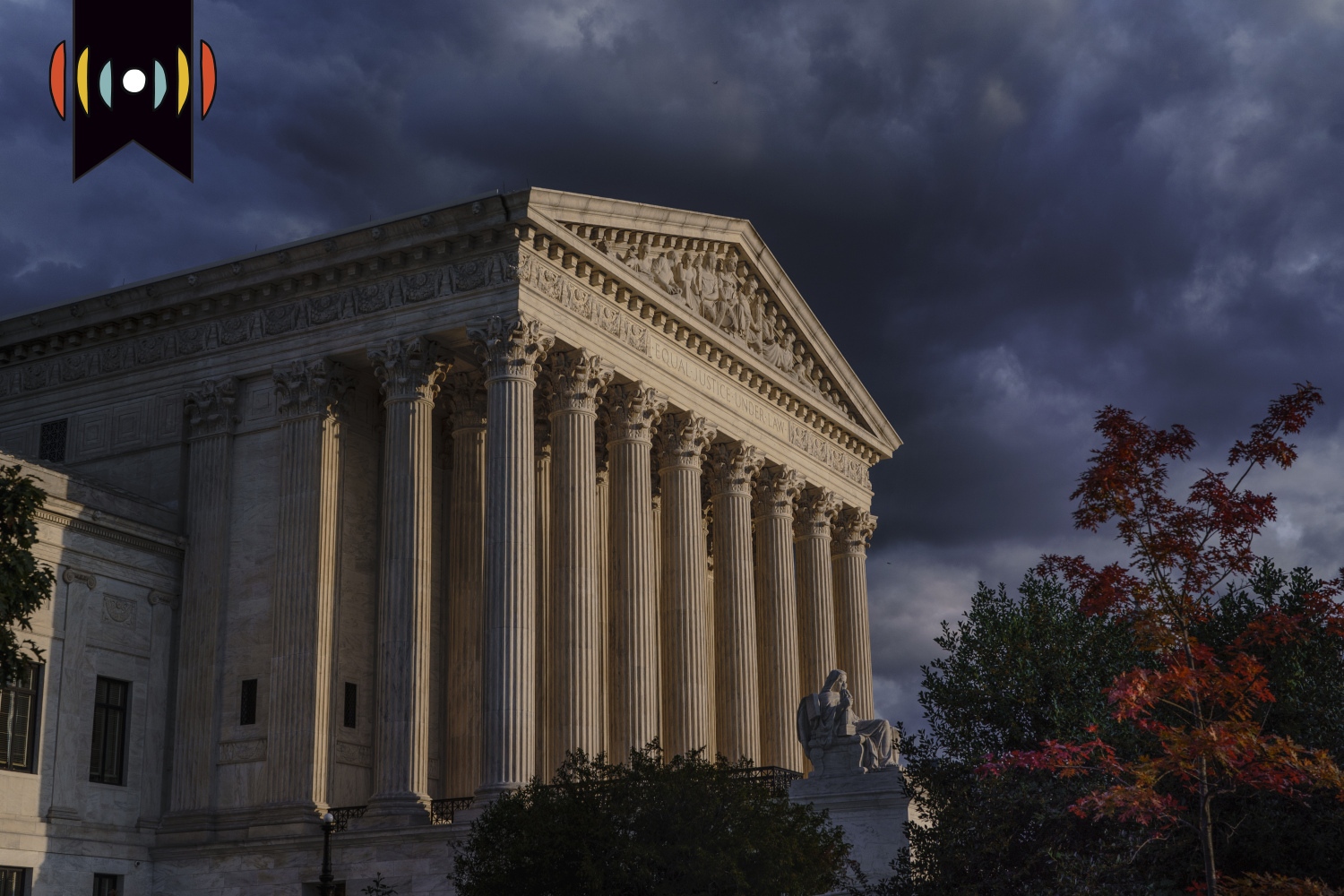 MYRNA BROWN, HOST: It’s Monday morning and a brand new work week for The World and Everything in It. Today is the 25th day of October, 2021.

NICK EICHER, HOST: And I’m Nick Eicher. It’s now time for Legal Docket. Before we get to today’s arguments, and we have two of them, first we want to note that the Supreme Court did agree on Friday to take up the Texas heartbeat law that protects most unborn children from abortion.

The court will consider two questions: One, can the federal government sue Texas to stop enforcement of the law? And two, who can be sued?

You may know this law sets out private enforcement, not government enforcement. But the second question here specifically will address whether private citizens may sue anyone who aids or abets an abortionist.

BROWN: The court is moving very quickly here. The briefs of the parties are due the day after tomorrow, Wednesday, and the reply briefs are due on Friday. The high court will hear oral arguments next Monday, November 1st.

EICHER: Well, let’s run through the facts of the first one: It’s Thompson v. Clark. Goes back to the year 2014, Larry Thompson was living with his then-fiancée, their baby daughter, and the fiancée’s sister in Brooklyn, New York. The couple is married now.

The conflict started when the sister called 9-1-1 after noticing red rashes on the baby’s backside. She reported child sexual abuse. Four police officers showed up. They asked to come into the apartment. Thompson said no. They came in anyway.

And according to Thompson, police tackled him and pinned him to the floor. The police say during the altercation, Thompson slapped an officer and flailed his arms.

As to the abuse claim, both EMTs and the hospital examined the baby and found only diaper rash—but no signs of abuse.

ROUGH: Nevertheless, police arrested Thompson and he spent a couple of days in jail. One police officer filed a complaint that accused Thompson of two crimes: resisting arrest and obstruction of a government investigation into the child’s welfare. The District Attorney’s Office eventually dismissed the case “in the interest of justice.”

EICHER: Things didn’t end there though. Thompson sued the police under a legal provision that allows an individual to bring a civil lawsuit against state government actors for civil-rights violations. Here, a potential violation of the Fourth Amendment, which prohibits unreasonable searches and seizures. Specifically, Thompson argued a malicious prosecution claim.

The police argue Thompson failed to do that. They say favorable termination means Thompson must show affirmative evidence of innocence. Here, the D.A. simply dismissed the charges for a vague reason: “in the interest of justice.”

Thompson argues that dismissal is enough.

And the appeals courts in different circuits are split on the issue, which is why the case is at the Supreme Court. It will try to determine: What does “favorable termination” mean? What standard applies? Thompson’s version? Or the police officers’?

Let’s start with the fact that an individual is innocent until proven guilty. Isn’t that basic principle enough to show that a dismissal … no conviction … equals favorable termination? Thompson’s lawyer Amir Ali says yes. But Chief Justice John Roberts said, not so fast. Think about this scenario:

CHIEF JUSTICE ROBERTS: Well, what if they're dismissed pursuant to an agreement that says, okay, you were the number two person in this vicious gang and you've killed five people and all that, but we want you to testify against the number one person. And in exchange, we're going to dismiss the charges? Is that consistent with innocence?

ROBERTS: It's a dismissal and it's a pretty good thing for him, I guess, but I don't think anybody would look at that and say, you know, that's not inconsistent with your innocence.

Justice Stephen Breyer brought up Jean Valjean. From Les Mis! What if after he stole bread, the police let him go. Extended him mercy. Now Jean Valjean can bring a malicious prosecution claim and use the dismissal to show favorable termination?

ALI: Well, remember, Your Honor, everyone here agrees that Petitioner's going to have to prove his claim. He still has to prove the absence of probable cause, he has to prove causation, and he has to overcome…

On the other side, John Moore argued on behalf of the officers. And Justice Brett Kavanaugh said the idea that Thompson would have to affirmatively show innocence is an upside-down rule:

JUSTICE BRETT KAVANAUGH: Your proposed rule requiring indications of innocence would seem to have the perverse consequence of ensuring that some of the most deserving plaintiffs, those who were falsely accused and whose cases were dismissed early on, could not sue unless they could show, dig into the prosecutor's mindset, whereas those who went to trial could sue.

JOHN MOORE: Prosecutors dismiss cases for all sorts of reasons at all stages of proceedings that have very little to do with the merits. The insufficiency of the evidence is the motivating factor for a prosecutor to dismiss cases in about 10 to 15 percent of cases, which leaves 85 to 90 percent of cases dismissed for reasons wholly independent of the merits.

Another argument the officers brought up: Before deciding what “favorable termination” means, the court must first resolve a foundational question. Does the claim Thompson brought against the state police officers even exist? The officers argue Thompson is twisting together different laws to make a new one.

And Justice Samuel Alito seemed to agree with the officers on this point. When questioning Jonathan Ellis, also arguing on behalf of Thompson, the hypothetical switched from historical novels to fantasy.

JUSTICE SAMUEL ALITO: Let's say someone is questioning a medical expert, an expert on lung cancer. And the question is, Doctor, I'm going to ask you a question about a centaur, which is a creature that has the upper body of a human being and the lower body and the legs of a horse. And what I want to know is, if a centaur smokes five packs of cigarettes every day for 30 years, does the centaur run the risk of getting lung cancer? What would the medical expert say to that?

JUSTICE ALITO: What should I do if I think there is no such thing as a Fourth Amendment malicious prosecution claim?

In other words, if a claim doesn’t exist, how in the world can the court determine what the standard is?

But Justice Amy Barrett pushed back. She asked the lawyer for the officers: Are you just arguing the Fourth Amendment claim doesn’t exist because you know you’re going to lose if the Court answers the favorable termination question?

JUSTICE AMY BARRETT: So I wonder if it's fair to infer that you think that your assessment of the case is that you're on relatively weaker ground on the question presented about what counts as a favorable termination and that you think your stronger argument is the upstream argument?

In his rebuttal argument, Ali, lawyer for Thompson, took Barrett’s comment and ran with it.

ALI: All the court needs to say is something like this: The Second Circuit decided this case on the basis that the favorable termination rule requires indications of innocence. It does not. A criminal proceeding terminates in favor of the accused when it ends, and the prosecution has failed to obtain a conviction. That's the thrust of it. That's three sentences, two if you like semicolons.

So that case looks at the balance between holding police accountable for constitutional violations. But also protecting them from meritless claims.

The second case is Hemphill v. New York. In that one, a street fight broke out on Easter Sunday. Somebody shot and killed a 2-year-old. New York tried to prosecute a man named Nicholas Morris for the murder. But that ended in a mistrial. New York then cut a deal with Morris and went after Darrell Hemphill instead. Hemphill denied killing the boy. But a jury convicted him. In part because the trial court had allowed in some evidence by Morris, the first guy. But Hemphill didn’t have an opportunity to cross-examine Morris. The question in this case is whether the trial court violated Hemphill’s Sixth Amendment right preserved in its Confrontation Clause. The right to confront his accuser.

Hemphill’s attorney took a microscope to the alleged error at trial. But Justice Alito took out a telescope.

JUSTICE ALITO: We take cases for the most part to decide important legal questions and not just to determine whether there was an error in a particular criminal trial in the Supreme Court of New York for the County of the Bronx, right? So the important legal question here is whether there can be a waiver of the Confrontation Clause right either expressly or implicitly. That's the underlying, that's what's important about this case.

Mary Reichard will be back next week to bring you up to date on more oral arguments the justices have heard this term.