Where will the high court draw the line on vaccine mandates for private companies? 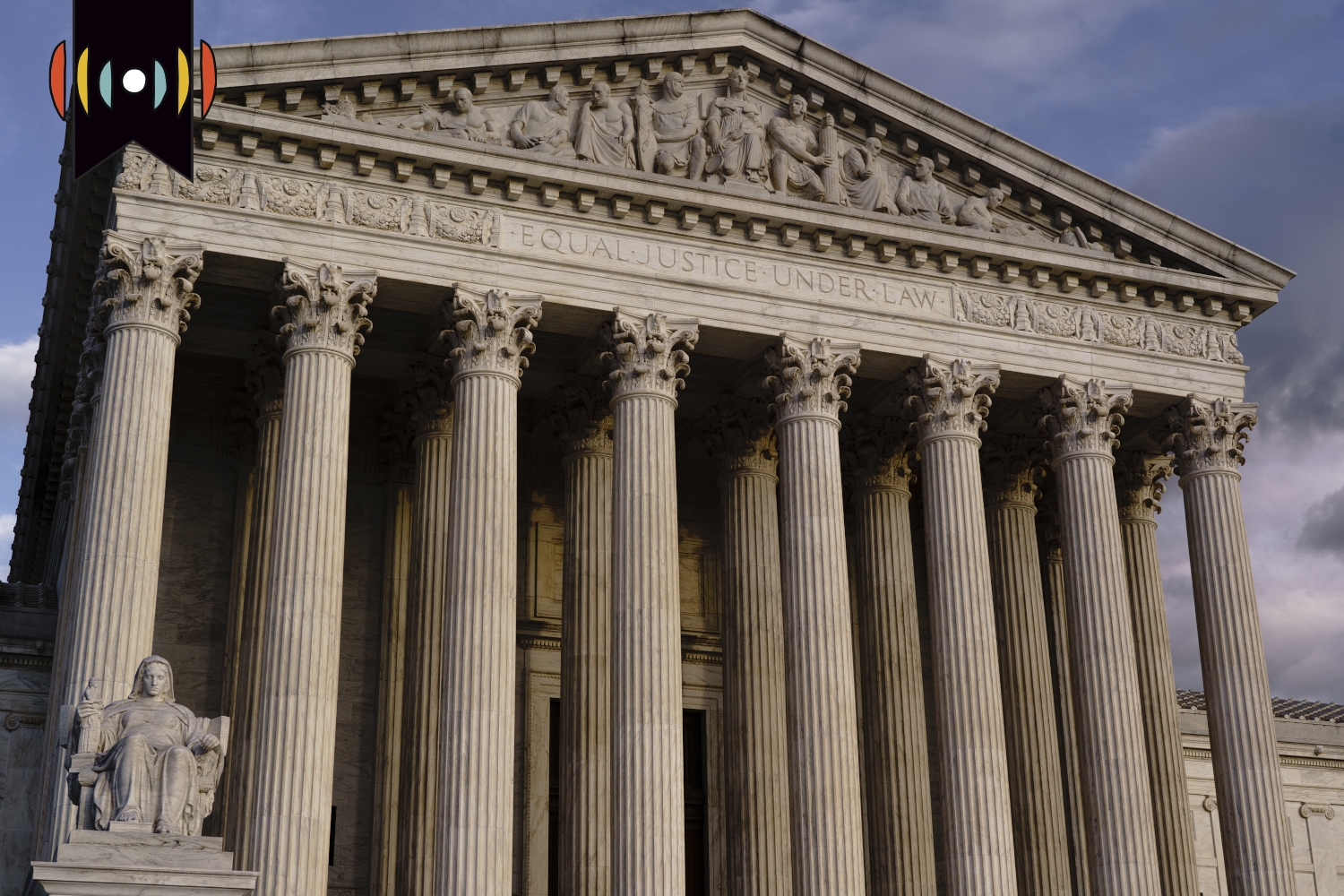 MARY REICHARD, HOST: It’s Monday, January 10, 2022, and you’re listening to The World and Everything in It. Good morning. I’m Mary Reichard.

The legal question isn’t whether the vaccines do or don’t work. The issue is whether federal agencies have authority to force big employers to require employees to get vaccinated or get tested every week.

This story is changing fast. That regulation is set to go into effect today, Monday, unless this morning the court stops it. That’s what business groups ask the justices to do.

REICHARD: Chief Justice John Roberts seemed to lean their way as he pointed to what looks like lazy governance as a culprit. Congress won’t do its work, so the executive branch does it for them via federal agencies that it controls.

Listen to his exchange with Solicitor General Elizabeth Prelogar.

ROBERTS: It seems to me that it's that the government is trying to work across the waterfront and it's just going agency by agency. I mean, this has been referred to, the approach, as a work-around, and I'm wondering what it is you're trying to work around.

PRELOGAR: What we're trying to do here and what OSHA did was rely on its express statutory authority to provide protection to America's workforce from grave dangers like this one.

Express statutory authority, perhaps, but Prelogar conceded that this federal regulation is novel.

ALITO: On the issue of whether you're trying to squeeze an elephant into a mouse hole and the question of whether this is fundamentally different than from anything that OSHA has ever done before…Most OSHA regulations, all of the ones with which I'm familiar, affect employees when they are on the job but not when they are not on the job. And this affects employees all the time. If you're vaccinated while you're on the job, you're vaccinated when you're not on the job. Isn't this different from anything OSHA has done before in that respect?

Sure it is, Prelogar answered, but it’s still OSHA protecting workers.

ALITO: Suppose that, I mean, suppose, this is a little science fiction, but maybe it will illustrate a point. Suppose that this protection were provided not by the administration of a vaccine but by waving a wand over employees when they arrive at work and suppose that wand also had the capability of taking away this protection when the employee leaves work. Would OSHA have the authority to tell employees you must have this wand waved over you when you arrive, but you can't have it taken off when you leave?

PRELOGAR: No, I don't think that OSHA would have that authority.

He then carefully laid out the case for the vaccines: FDA approval and the benefits that outweigh the risks. He’s vaccinated.

And still, the question remains:

ALITO: But is it not the case that these vaccines and every other vaccine of which I'm aware and many other medications have benefits and they also have risks and that some people who are vaccinated and some people who take medication that is highly beneficial will suffer adverse consequences? Is that not true of these vaccines?...

PRELOGAR: That can be true, but, of course, there is far, far greater risk from being –

Prelogar reiterated what Justice Alito had already said about vaccine efficacy. He persisted. There’s a difference between NO risk and some risk. And the government asks some individuals to take a risk they reasonably might not want to take:

PRELOGAR: There would be no basis to think that these FDA-approved and authorized vaccines are not safe and effective.

Prelogar skirted a direct answer and pounded on “this is just OSHA doing what OSHA’s supposed to do”—namely, fight infectious disease in the workplace.

Listen to this exchange between Scott Keller for businesses and Justice Sotomayor:

KELLER: If Congress was going to give an occupational health agency this type of power to essentially regulate directly the employee rather than telling employers these are the types of things that you would want to do within your workplace, it would had to provide that clearly…

SOTOMAYOR: So what’s the difference between this and telling employers where sparks are flying in the workplace that workers have to wear a mask?

KELLER: When sparks are flying in the workplace that’s presumably because there’s a machine that’s unique to that workplace…

SOTOMAYOR: Why is the human being not like a machine if it’s spewing a virus, blood-borne viruses?

Do note that Justice Sotomayor misspoke: COVID-19 is a respiratory virus, not a blood-borne virus. And she went on to make other errors of fact.

Or, dare I say it? Misinformation about COVID-19.

SOTOMAYOR: Numbers show that Omicron is as deadly and causes as much serious disease in the unvaccinated as delta did. We have over 100,000 children which we’ve never had before in serious condition and many on ventilators.

That isn’t the case.

The evidence shows Omicron is not as deadly as Delta. And the government says the national pediatric COVID census is under 35,000, not 100,000.

And even with that, COVID is merely incidental in many of those pediatric admissions.

Justice Clarence Thomas brought the facts back about the vaccines themselves:

THOMAS: There’s been some talk, suggestion, or at least it seems to be implied, that the vaccinations are efficacious in preventing some degree of infection to others. Could you talk about that? Particularly as I remember in the filings that the younger workers, the 20-year-olds who are unvaccinated are actually safer than the older workers who are vaccinated. So there are obviously some differences.

Regardless, Justice Elena Kagan noted that there’s all kinds of trade-offs to be made between public health and economic costs.

KAGAN: So who decides? Should it be the agency full of expert policy makers and completely politically accountable through the president? This is not the kind of policy in which there’s no political accountability. It also has the virtue of expertise. So on the one hand the agency with their political leadership can decide. Or on the other hand courts can decide. Courts are not politically accountable. Courts have not been elected. Courts have no epidemiological expertise. Why in the world would courts decide this question?

That’s the argument for courts to give agencies a lot of deference. In the law, it’s called the Chevron Doctrine.

Conservative justices want to chisel that doctrine down, from what they see as too-broad and unaccountable administrative power.

As for agency expertise, OSHA does not have expertise in communicable disease, as Keller for the business groups argued. And then to sweep 80 million workers into a one-size-fits-all policy? No.

Workplaces aren’t all alike, the argument went. Truckers are mostly alone on the road, landscape artists are mostly outside. Those jobs aren’t like meat packing plants or assembly lines. Why treat them as though they are?

I don’t think this regulation is going to hold up.

But now we turn to the second argument, a challenge to the mandate from the Biden administration that requires vaccination for healthcare workers or else lose their jobs.

They aren’t allowed the alternative of weekly testing—as is available for other industries.

OSETTE: The Secretary overlooked the critical perspective of rural healthcare facilities in the states and the devastating consequences the mandate will have on rural Americans' access to healthcare. This represents vast stretches of this country where healthcare is not provided by massive institutional providers with tens of thousands of employees, but by smaller healthcare facilities run by local communities. While a 1 percent loss of staff may be insignificant to the former, it is fatal to the latter. Without the injunction, rural America will face an imminent crisis.

But the federal government argued any delay in carrying out the healthcare worker mandate puts lives at risk. The Department of Health and Human Services has the power Congress gave it to make policy judgments. And our HHS Secretary Xavier Becerra believes vaccines are the best way to prevent spread of infection within his area of authority.

MURRILL: This case is not about whether vaccines are effective, useful, or a good idea. It's about whether this federal executive branch agency has the power to force millions of people working for or with a Medicare or Medicaid provider to undergo an invasive, irrevocable, forced medical treatment, a COVID shot. It's a bureaucratic power move that is unprecedented. If it can do that, the question still remains as to whether it properly exercised that power here. This will create chaos in state provider networks, limit access to care for the poor and needy, and eviscerate informed consent for millions of people.

So the large themes in both cases?

Here are some of them:

What did Congress intend to delegate to OSHA back in the 1970s?

What are the limits to agency power? “Public health” can be defined so broadly that anything could fit under it.

OSHA didn’t estimate the financial cost to business and individuals because it used “emergency” procedures in lieu of the normal rulemaking process. As Justice Amy Coney Barrett asked, just how long can an “emergency” last?

SCHMITT: The pathway to tyranny is paved with these kinds of emergency executive orders, which is why this case is so important.

Still, court watchers including me think the justices will treat these two mandates differently. Overall workplaces versus medical workers.

Perhaps a ruling came down by the time you hear this report. Either way, we need clear lane markers to keep government in its place, and citizens free from tyranny, while acknowledging 100% safety is not possible.