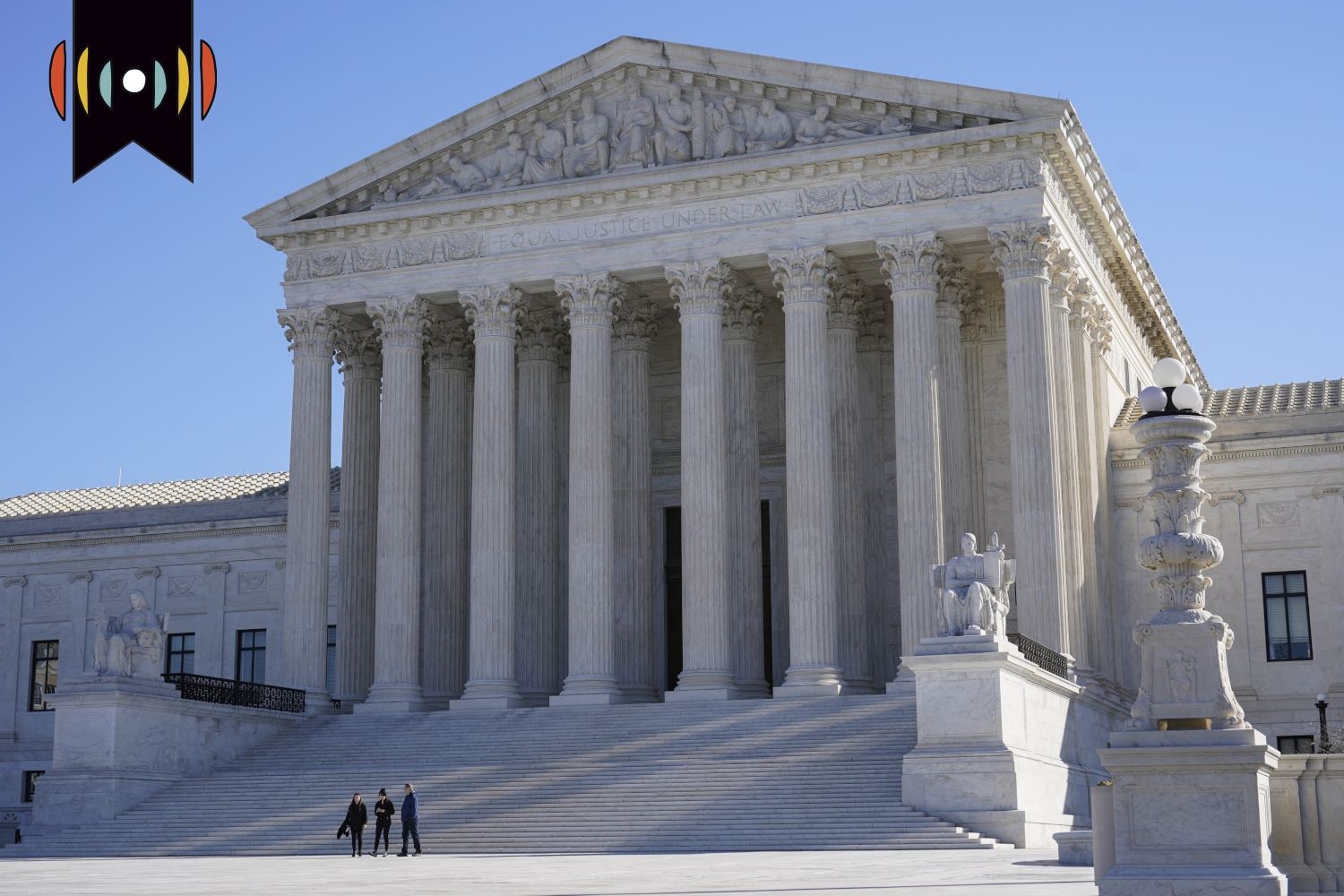 NICK EICHER, HOST: It’s Monday the 7th day of March, 2022. Glad to have you along for today’s edition of The World and Everything in It. Good morning, I’m Nick Eicher.

JENNY ROUGH, LEGAL CORRESPONDENT: Good morning to you both.

REICHARD: I’ll say here at the top that Jenny and I have been hard at work on Season 3 of the Legal Docket Podcast.

ROUGH: That’s right. We’ve got some fascinating episodes in the lineup, and the podcast is slated to air this summer.

REICHARD: We’ve been busy with that, and you’ve been busy covering the Supreme Court’s doings from last week.

First, the high court ruled 8-1 that Kentucky’s Republican attorney general, Daniel Cameron, may defend an abortion restriction. The lower courts had struck it down as unconstitutional. This decision will help attorneys general to defend laws when a state official from an opposing party doesn’t want to.

Next, a 6-3 ruling that reinstates the death penalty for one of the Boston Marathon bombers.

Back in 20-13, two brothers set off bombs near the finish line of the race. One brother was killed a few days later. The younger brother, Dzhokhar Tsarnaev, was captured and put on trial. During the jury selection process, Tsarnaev’s attorneys wanted to ask prospective jurors: What facts had they learned about the case from the media? The trial court judge didn’t allow that question.

REICHARD: Right, and then at his sentencing, Tsarnaev’s attorneys wanted to introduce evidence of prior crimes committed by the older brother. That, to show he was the mastermind of the bombings. But the judge didn’t allow that either.

The jury found Tsarnaev guilty on multiple counts and imposed the death penalty. But the appeals court threw that out, holding the lower court abused its discretion in not allowing in the evidence.

The Supreme Court disagreed with the appeals court and held that the trial court acted reasonably in these matters. Bottom line? Death penalty reinstated.

ROUGH: The next case involves FBI surveillance. A group of Muslim individuals sued the FBI for illegally spying on them. They claimed the FBI targeted them because of their religious beliefs. The FBI argued that to mount a defense against the religious freedom claim, it would have to reveal information that would threaten national security. It invoked what’s known as the state secrets privilege.

The trial court agreed the privilege applied and dismissed the claims. But the court of appeals allowed the claims to go forward. It said a provision in the Federal Intelligence Surveillance Act displaced the state secrets privilege. But in a unanimous ruling, the Supreme Court disagreed with the court of appeals. And it sent the case back to the lower courts for further proceedings.

REICHARD: The fourth and final opinion also involves claims about government misconduct. Back in 2002, the CIA subjected a suspected terrorist to enhanced interrogation techniques—waterboarding, sleep deprivation, cramped quarters. He sued over the alleged mistreatment. During litigation, his lawyers requested that the government turn over documents related to the detention. The government again invoked the state secrets privilege, saying it didn’t have to turn over the information because of national security. The Supreme Court agreed and said the case should be dismissed.

Now, onto oral argument. Today, two cases that fall under the umbrella of Native American law.

ROUGH: First up: A case that involves a crime committed on the Ute Mountain Ute Reservation in Colorado. And please be advised some of the details of this case may not be suitable for younger listeners. Parents with small children may want to hit pause.

The defendant Denezpi says he ought not be prosecuted for the same crime twice. That’s his double jeopardy claim under the Fifth Amendment of the U-S Constitution.

The crime happened in 2017. Denezpi and a woman named Valcita Yellowhorse traveled together to the Reservation. That night, they arrived at a residence located within the reservation. There, Yellowhorse says Denezpi barricaded the front door and ordered her to disrobe. He threatened to hurt her—or even kill her—if she didn’t. She says Denezpi then raped her.

ROUGH: It might help to picture two circles. One circle is the tribal government. The second circle is the federal government. Two distinct sovereigns. Both have independent authority to bring charges even though that might very well mean a defendant is prosecuted twice.

REICHARD: That’s because the Ute Mountain Ute Tribe doesn’t have a tribal court. Not all tribes do. Sometimes a tribe is too small. Or a tribe can’t afford its own judicial system. So some tribes instead rely on a Court of Indian Offenses. Those courts are established by a U.S. federal agency under the Code of Federal Regulations, so they’re called CFR courts. That’s what the Ute Mountain Ute Tribe has done here. Elected to use a CFR court.

ROUGH: Denezpi was first prosecuted in the CFR court. He pleaded guilty and served time. Then he was prosecuted in federal district court. And federal prosecutors obtained a second conviction.

The question boils down to whether CFR courts are federal or tribal courts.

REICHARD: Arguing on behalf of Denezpi was Michael Kimberly. He argued this does violate the double jeopardy clause. After all, the CFR prosecutor derives his power from the United States government.

MICHAEL KIMBERLY: The prosecutor in the Ute Mountain Ute Tribe CFR court is a federal officer answerable to federal authorities. He is not a tribal officer answerable to tribal authorities. He draws his authority in the CFR to prosecute, and the CFR court draws its authority to punish, from the Code of Federal Regulations and from the United States Code authorizing the promulgation of those regulations.

REICHARD: Ergo, federal prosecutors cannot then have a second bite at the apple in federal district court.

ROUGH: But Justice Elena Kagan brought up a sticky point for Denezpi. She noted that the Ute Mountain Ute Tribe isn’t a party to the case. Remember: The United States is the named plaintiff in both cases. But the tribe did file a friend of the court brief in support of the federal government. It argued that the CFR court operates as if it were a tribal court.

JUSTICE ELENA KAGAN: The tribe seems to think of these courts as very tribal. You know, I mean, there's a tribal brief, and the tribal brief is on the government's side. And it says these are our courts. I mean, they believe these are their courts.

Denezpi’s lawyer argued that that doesn’t change the fact that the CFR court is a federal entity.

Erica Ross argued for the government. She pointed out Denezpi was prosecuted under two different laws.

But Chief Justice John Roberts said, not so fast. The inquiry depends not only on the source of the law, but who is enforcing it. Here, the federal government—both times. So what about the danger that the first prosecution would be a dress rehearsal, or dry run, for the second?

CHIEF JUSTICE JOHN ROBERTS: There's a lot at stake here. You want to make sure you have as effective a prosecution as you can, so, you know, run a prosecution through the CFR court, see what evidence they have, whatever, and then take a much stronger case when there's more at stake.

Justice Sonia Sotomayor followed up on that.

Ross emphasized the way the tribe does have control in the first prosecution.

There’s definitely a gap in the law here. Justice Kagan described the case as being in a halfway house. Hopefully the court’s decision will solve the ambiguity.

The second case takes us from Colorado to Texas. The Lone Star state is attempting to prohibit Indian tribes from operating the game bingo on tribal lands. But the state does allow bingo in other venues in certain circumstances, like for charity purposes. Whether the tribes can engage in bingo will depend on the interpretation of a statute. Does the text flatly prohibit or merely regulate the game?

Here’s an exchange between Chief Justice Roberts and the tribes’ attorney Brant Martin:

JUSTICE ROBERTS: If you had, under Texas law, you can have bingo games sort of up to $100 at stake, okay, and then what's happening is the tribe is having bingo games up to $1,000. Now, if you told somebody that, that they have games up to $1,000, it would be perfectly natural for that person to say, well, that's prohibited because there's a $100 cap.

BRANT MARTIN: Your Honor, those are the exact type of restrictions that this Court analyzed and determined to be regulatory.

Well, we will soon find out which side can yell “Bingo!” in this contest.

And that’s it for this week’s Legal Docket. I’m Jenny Rough.