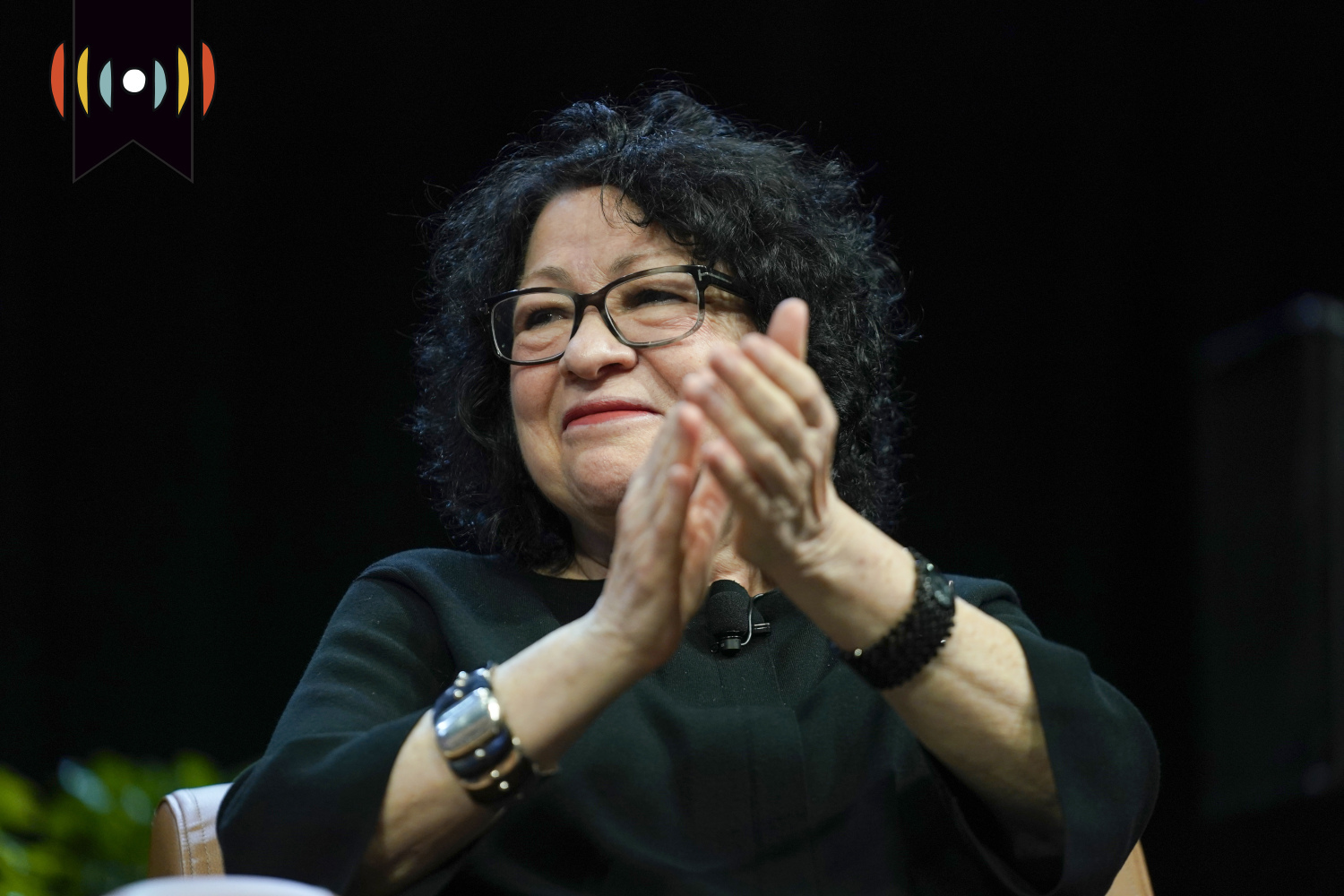 MARY REICHARD, HOST: It’s Monday morning and we welcome you to another week of The World and Everything in It on this Monday, September 12th. Good morning, I’m Mary Reichard.

So far this summer, we’ve featured an interview that Supreme Court Justice Amy Coney Barrett gave at the Reagan library and a speech by Justice Samuel Alito.

Today, a totally different viewpoint, an interview with Justice Sonia Sotomayor. She was the featured guest back in June at the national convention of the progressive group, American Constitution Society.

REICHARD: Her former law clerk asked her questions as did members of the audience. We’ve edited the nearly hour long interview to fit our time here, but we’ll link to the entire event in today’s transcript.

WRIGHT: On the topic of current, the current state of events in the world, we're living in a time where public competence in institutions generally seems to be declining. And until recently, the judiciary and especially the Supreme Court, had enjoyed relatively steady competence from the public. And Gallup is now reporting that for the first time since they started polling on the issue, public competence in the court has plummeted and is at its lowest point. So why should the public continue to have confidence in its institutions of government, including the Supreme Court.

SOTOMAYOR: Institutions are made up by human beings. Because we are human, by necessity, we make mistakes. What you believe in is an institutional structure, our government, how it operates together, the three branches of government, a checks and balances in the way they operate. And in the people who created us. You are as equal if not the fourth branch of government, and perhaps the most important because you vote, and you are the ones who elect or at least indirectly appoint the other branches. And to that end, when we as institutions have made mistakes, other parts of the branches, because the four work in tandem, remember, I created the people as the fourth now. The people have worked to make changes. I've just recently done very close study of Dred Scott. Dred Scott is reputed to be one of the worst decisions of the Supreme Court. It's hyperbole to say that it caused the Civil War. It didn't cause a war. But it is the decision used on both sides of the Civil War, to motivate their respective adherence to fight. The North used the Dred Scott decision to tell northern states that the southern states were looking to spread slavery throughout the country, the southern states were talking about the Republicans undoing the Constitution by not following it, and not respecting the southern states rights to have slaves. And we ended up in a civil war. And the civil war in the 13th 14th and 15th amendment directly undid the three rulings of the Dred Scott case. Took a war. But it took nearly another century, before Brown versus Board of Education, and a pitstop of incredible impact, Plessy versus Ferguson, blessing separate but equal, for civil rights leaders in 1954, to have finally won the battle of freedom and civil rights started in Dred Scott, and ended in Brown versus Board of Education to make all people equal under the Constitution. But that was all four branches working together. But it can be lost if we don't all play our part. And I think, for my motivation, that I want to give you as young lawyers is: Dred Scott lost his 11 year battle for freedom in the courts. And he died a year after Dred Scott was decided. Never even got to enjoy the freedom he had bought because one of the people who helped him in his legal battle, the son of his original slave owner, secured his debt to buy his freedom, but he hardly got to breathe it before he died. Yet he won the war. And so that's why I think we have to have continuing faith in the court system, in our system of government, in our ability, I hope not through war, but through constitutional amendment to change in legislation, towards lobbying towards continuing the battle each day, to regain the public's confidence that we, as a court as an institution have not lost our way.

WRIGHT: This question stems from a quote that I heard some time ago in an interview. And the quote is, what punishments of God are not gifts? I was reading your middle school book with my son, and you write about things that are difficult. Losing your dad at a young age, having a chronic illness, growing up in the projects, but shout out to girls from the projects because we run the world. And but you write about them not from a place of pain or negativity, necessarily, but an appreciation for what you've gained from them. So can you talk about the value of adversity? And how it's made you a better person a better justice, a better judge?

SOTOMAYOR: If it doesn't kill me, it makes me stronger. And so yeah. That is, what adversity does to you. It forces us to find the best and strongest part of yourself. It forces you to be inventive about ways to face the problem and get around them. It forces you to look at your soul and say, Will I survive? I will. Now, can you do that without adversity? And I will say to every parent in this room, because most of you are affluent, you have one heck of a challenge. Because that is the 100% question that all of my relatives who came up in circumstances similar to mine, are asking about their children. Will they be able to do as much as we did? Because they have not grown up with our hardship. I say I don't know. Because I don't know, if you don't suffer a little bit whether you realize and maybe a lot, whether you realize and accept how much that helps you become a better person. And it does. It helps you to forgive weaknesses in other people. One of the biggest things that I realized was the people who loved me the most, particularly my father, because I knew how desperately he loved me. But that love wasn't enough not to let him kill himself. He died of alcoholism. Couldn't stop drinking. And what that made me realize is that people do things in life. They're responsible for the choices. We all pay for our choices. My dad paid for his okay. But I could forgive him. I could look and say, we as human beings are not perfect. But it doesn't mean we're horrible people. We do wrong things. Every parent in this room has had a child look at them and say, Don't you love me anymore? And every parent has said, Are you silly? Yes, I love you. I just don't like what you did. Think about that. I thought about it when I was a district court judge and I had defendants before me and some of them did some horrible, horrible crimes. But I still had to look for their humanity. It didn't stop me from punishing them, and some of them I punished very harshly. That's not the point. I was there to impose a sentence and do it in a respectful way. And so I think that's what adversity teaches you. And it is my hope that those who don't suffer adversity think about that in trying to put themselves in the shoes of other people. And know what the value of struggle is. Know what the value of hardship is, and at least be grateful for what you have and not resentful of what other people have had to work for. And I do think it is important to understand that hardship can be a gift from God, not a punishment.

WRIGHT: How do you go about cultivating relationships with people with whom you really, really disagree?

SOTOMAYOR: With every single person that I meet, particularly if I disagree with them, I try to find the goodness in them. I try to find what part of them can we communicate with together. And so I may have used and I have used as an example, my relationship with Justice Clarence Thomas, I suspect that I have probably disagreed with him more than with any other justice. That we have not joined each other's opinions more than anybody else. And yet, Justice Thomas, is the one justice in the building that literally knows every employee's name. Every one of them, and not only does he know their names, he remembers their families names and histories. He's the first one who will go up to someone when you're walking with him and say, Is your son, okay? How's your daughter doing in college? He's the first one that when my stepfather died, sent me flowers in Florida. He is a man who keeps, cares deeply about the court as an institution, about the people who work there. He has a different vision than I do, about how to help people, and about their responsibilities to help themselves. I've often said to people, Justice Thomas believes that every person can pull themselves up by their bootstraps. I believe that some people can't get to their bootstraps without help. They need someone to help them lift their foot up so they can reach those bootstraps. That's a very different philosophy of life. But I think we share a common understanding about people and kindness towards them. That's why I can be friends with him. And still continue our daily battle over our difference of opinions in cases. But you really can't begin to understand an adversary unless you step away from looking at their views as motivated in bad faith. And so, yes, I have friends of all backgrounds, and friends have all political views. And I will continue to do so because that's important to me. Understanding how I can make the best pitch, long term, to achieve the goals that I think are important.

REICHARD: You’ve been listening to excerpts of US Supreme Court Associate Justice Sonia Sotomayor speaking at the American Constitution Society’s annual convention this past June And that’s this week’s Legal Docket.