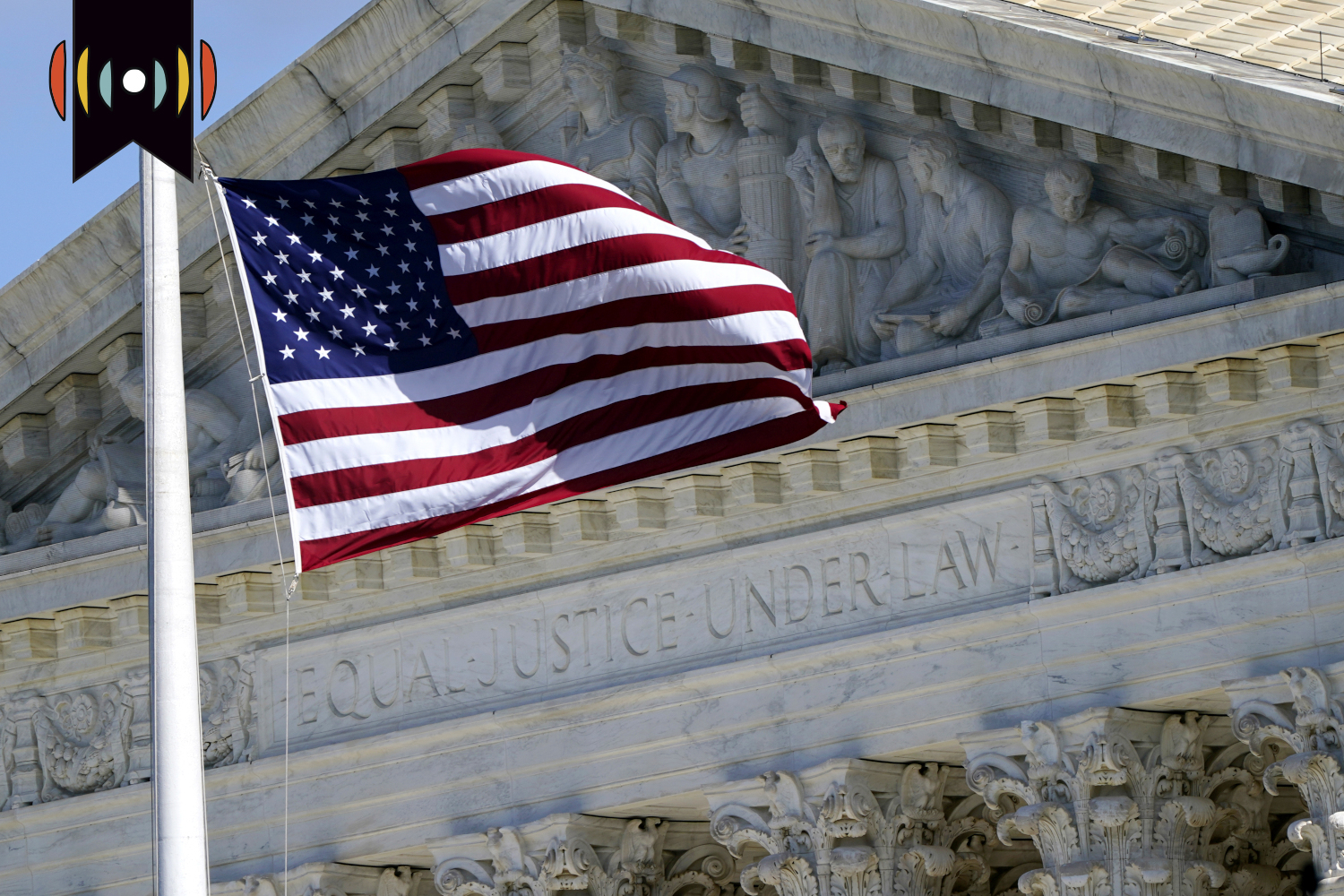 NICK EICHER, HOST: It’s Monday the 25th day of April, 2022. Glad to have you along for today’s edition of The World and Everything in It. Good morning, I’m Nick Eicher.

JENNY ROUGH, LEGAL REPORTER: Hi, Mary! Yeah, we’re getting to that time of year when opinions start becoming more frequent and today’s an example: We have five opinions from last week. And we’ll review oral argument from a case involving an international child custody dispute.

REICHARD: Well, let’s get to it. The first opinion deals with billboards in Austin, Texas.

The Supreme Court upheld Austin’s ordinance that prohibits companies from digitizing billboards not on business premises. Two billboard companies sued, arguing that’s a restriction on free speech. But a majority of six justices disagreed because the rule doesn’t affect content, or the words on the sign.This isn’t about speech; it’s about location. Therefore, the strictest level of judicial scrutiny doesn’t apply and the ordinance passes constitutional muster.

ROUGH: Next, government benefits and who’s entitled to them. This one is an 8-1 ruling, and in it, the court held that Supplemental Security Income benefits don’t extend to residents of the U.S. territory of Puerto Rico. The Territories clause of the U.S. Constitution gives Congress broad powers to make laws regulating U.S. territories, like Puerto Rico, Guam, and the Virgin Islands. At oral argument, Justice Elena Kagan described that authority.

Puerto Rican residents don’t have the burden of paying federal income taxes but also don’t receive all tax benefits. The court said that differential treatment did not violate the Fifth Amendment’s equal protection clause. It’s okay as long as Congress had a rational basis to treat the territories differently.

REICHARD: The third opinion is unanimous in favor of a law firm that missed a tax deadline. The question was whether the underlying dispute stopped the clock on the deadline. The answer is yes, it did, and the law firm can now contest the IRS’s ability to seize its property under what’s known as the doctrine of equitable tolling. During oral arguments, Justice Stephen Breyer defined that term.

BREYER: The law dictionary says equitable tolling is a court’s discretionary extension of a legal deadline. So they extended the legal deadline, therefore, it is timely.

The fourth case arose from a murder conviction. During his jury trial, authorities shackled the prisoner at the waist, wrists, and ankles. Some jury members noticed those shackles, others didn’t. At oral argument, Justice Brett Kavanaugh asked about that effect to the inmate’s lawyer:

KAVANAUGH: What about the fact that all the jurors testified that the shackles did not influence the verdict?

BAHAL: This Court has made clear that relying on juror testimony as to whether the effect of shackles affected their verdict is unreliable, because a juror will not always be aware of the effect of seeing a defendant in shackles. It has sort of a subconscious effect on the jurors.

Both sides agree those visible restraints violated his constitutional right of due process. But they don’t agree about which legal test applies to determine whether that violation is merely a harmless error. In a 6-3 ruling, the court held that both tests apply.

REICHARD: Lastly, a case I haven’t yet covered. I aim to cover oral argument before decisions come down, but sometimes the black robes beat me to it.

Here, a family in California seeks return of a painting that the Nazis stole from the family’s grandmother. The painting is now in the hands of a Spanish museum. The legal issue boils down to how a court should determine which jurisdictional law applies. The court held 9-0 that the court should look to California law for that answer, not federal law.

It’s a small victory for the family who can now pursue the case in lower court.

ROUGH: Now onto our oral argument for today. This dispute has to do with child custody—specifically it centers on a question of international child custody. Here are the facts: Narkis Golan and Isacco Saada married in 2015 and had a son a year later.

Golan is an American citizen. Saada is an Italian citizen. They married in Italy and spent the first two years of their son’s life there.

REICHER: Theirs was a turbulent relationship. Saada abused Golan, physically and verbally. That’s uncontested. She wound up in the ER at least once. Their son witnessed the abuse at times. But according to the record, he wasn’t the target of abuse.

When the child was 2, Golan took her son to the United States to attend a wedding in New York—and she stayed. She went to a domestic violence shelter.

ROUGH: The father filed a kidnapping complaint. He also filed a petition in federal district court in New York, asking the court to order the return of his son to Italy.

Part of what governs this fight is an agreement called “the Hague Convention.” That’s a treaty that establishes a way to return an internationally abducted child from one member country to another.

REICHARD: But there’s an exception to the general rule. If returning the child would place him in grave risk of harm, a court doesn’t need to order the return.

Given the father’s history of domestic violence, the court initially found that returning the boy to Italy would pose a grave risk of harm.

But despite that, the court still ultimately handed a victory to the father. And did order the child’s return to Italy. Here’s why: Under a Second Circuit rule, the court was required to consider whether the father or local authorities in Italy could improve the situation. Take additional measures to reduce that grave risk of harm.

ROUGH: That lower court determined that yes, they could. The father could attend therapy, stay away from the mother, and Italian authorities could make sure the dad had supervised visits with his child. Because those protective measures could be taken, the court ordered the child’s return to Italy.

Golan, the mother, then appealed to the U.S. Supreme Court.

The question here is whether that Second Circuit rule is appropriate. A court has discretion to consider whether the parent can undertake mitigating measures. But the court shouldn’t be required to consider that. That’s the mother’s argument.

REICHARD: Lawyer Karen King argued on her behalf. She reminded the justices that one purpose of the Hague Convention is quick resolution. And the Second Circuit’s mandatory rule that requires an additional step drags things out.

KING: The child here is almost 6 years old. He has spent the vast majority of his life in legal limbo. Reversal provides the safe and swift closure he deserves.

ROBERTS: Okay. But, if it was something pretty, you know, cut and dry and very simple, I mean, the grave risk is that, you know, his house is next to a nuclear waste dump, and he says, well, I'm moving in two weeks, you know, here's the agreement.

But Justice Amy Coney Barrett pointed out that domestic disputes fall into a different camp.

BARRETT: It just seems to me that that's a much different case for ameliorative measures than, say, the nuclear plant next door that the Chief posited at the outset. That would be a very—pretty straightforward move, and then there would be no more grave risk, whereas I think you get into the complexity of the financial support payments and the undertaking or restraining order, however it should be categorized, in these domestic abuse cases that pose maybe a unique circumstance?

KING: That's right, Justice Barrett. I think that the nature of the grave risk in a domestic violence case is extremely complicated, and it gets into mental health issues, psychological, very detailed family issues, and it would be very difficult to resolve that in an expedited proceeding, much less try to resolve that thinking about what it's like in a foreign country.

MIN: Yes, but we believe that it's inherent and implicit in the text of the convention, meaning that (a) grave risk inquiry necessitates an analysis of the future risk of harm to the child…

There’s a split among the appellate courts here: one circuit ruled one way, another ruled a different way. It’s called a circuit split and that is the precise reason it’s at the high court. A decision won’t resolve the family’s pain and trouble. But it could provide uniformity so that return petitions will be subject to the same standard, regardless of what region of the United States they’re filed in.