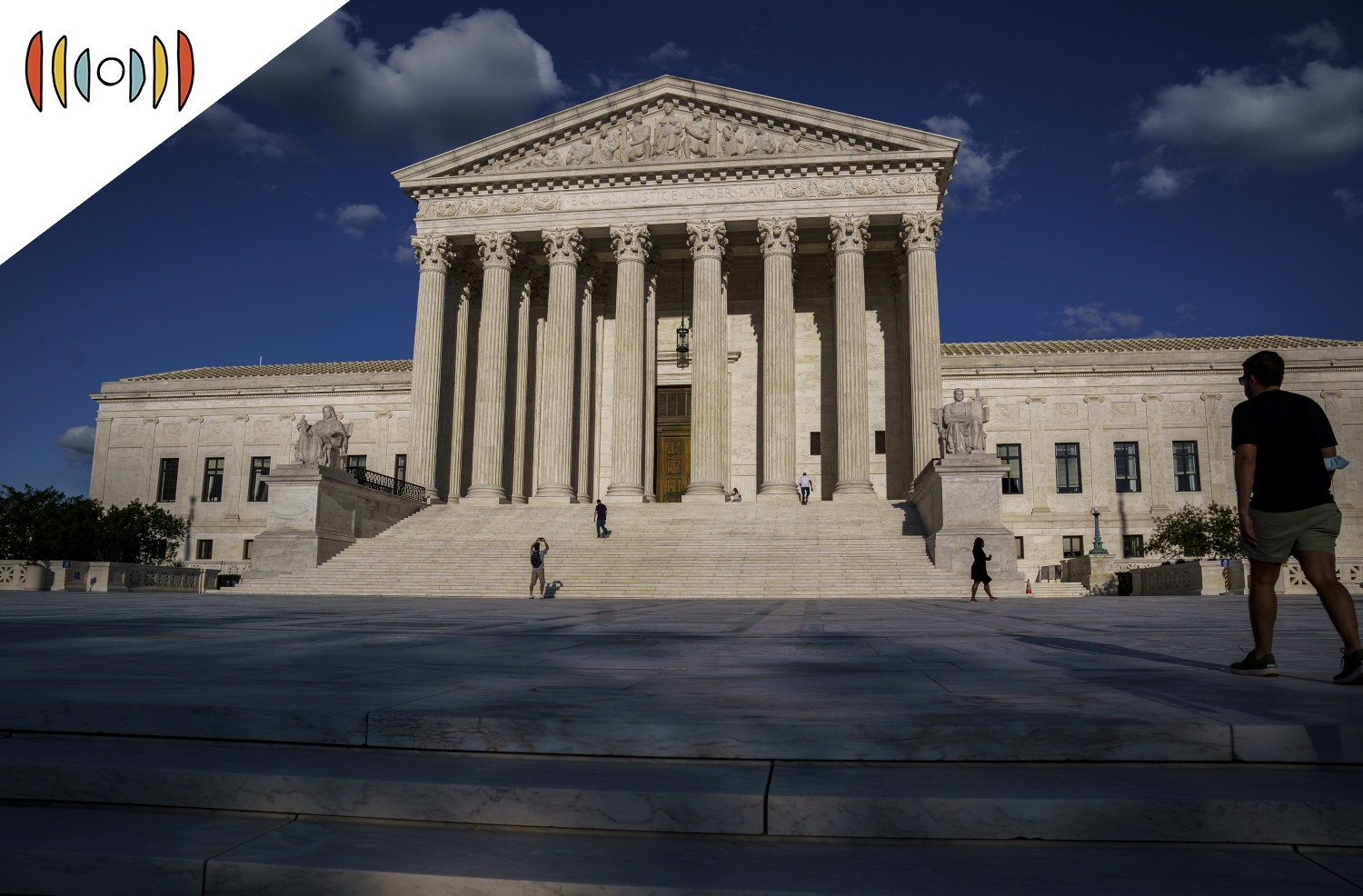 MARY REICAHRD, HOST: It’s Monday, September 13, 2021. Thanks for listening to The World and Everything in It. Good morning. I’m Mary Reichard.

This past week, the Legal Docket Podcast gave us an inside peek at what it’s like to work as a law clerk for a Supreme Court justice. We talked with five clerks about what goes on when the court is not in session.

REICHARD: That’s right. I keep thinking: Some kid is going to listen and become a lawyer because of it!

Well, one of those law clerks that we profiled has quite a remarkable story. Her name is Laura Wolk, W-O-L-K, and she is blind—the first woman law clerk with that disability. Today, we’d like to tell more of her story.

And to do that, we welcome my co-host on the Legal Docket Podcast, Jenny Rough.

JENNY ROUGH, REPORTER: Hi, Nick, hi Mary. Yeah, I agree with you, you know, Laura Wolk does have quite the moving personal story. I’ll begin at the beginning. She was still just a baby when she lost her eyesight to cancer. Listen to this …

WOLK: I am completely blind. I don't have any vision at all. And it's been that way basically since I was 15 months old. I had a type of retinal cancer. So I probably had some vision before I lost it all. But I don't have any visual memories or anything like that.

REICHARD: It’s not so easy for a person who can see to understand what it’s like not to be able to.

WOLK: So the biggest thing that I think people misunderstand is that if you are blind, you’re just floating around in space.

ROUGH: She says it’s not like that at all.

WOLK: Some people think that if they don’t have vision, they probably don’t have a good sense of where they are in the world. How could I get from my front door to the bus stop? Like I wouldn’t know where anything was on the way from point A to point B. But actually, the way our brains work, your spatial map is there. It’s just that if you have vision, that visual information is layered on top of it. But if you took it away, if you went blind tomorrow, you would still be able to create an image in your head of what your house looks like or what your office looks like.

REICHARD: Or streets in your neighborhood. Wolk is a runner. She runs to stay in shape and to clear her mind. That might raise a question in your mind as to how she does that.

WOLK: If you’re blind and you’re running, you can use anything. I use a lanyard actually. You and a sighted person just hold opposite ends of it. And as you run, they give you verbal cues, about turns or maybe if there's like a choppy sidewalk or something like that.

ROUGH: It’s one thing to learn how to move through the world without sight, but it seems like a pretty difficult thing to go to law school and become a lawyer. So many obstacles.

She grew up reading Braille. And using a very elementary version of a talking computer.

WOLK: And now, through the course of my lifetime have watched like this complete transition of technology where now you can have, you know, thousands of books on a Kindle or an iPhone or you know, it's just been totally transformative.

REICHARD: She says for her, the practice of law is a vocation, work she is called to do.

In law school at Notre Dame, she took classes from then professor Amy Coney Barrett; now, of course, Justice Barrett. Statutory Interpretation was one of those classes. Wolk says that class was intimidating—but to this day, also the most helpful.

ROUGH: Right. There’s more than one way to interpret a law written on the books. And the fact that one person interprets the words differently than another? The cause of many legal disputes!

REICHARD: Statutes can be interpreted roughly within three main theories. One is textualism. How would a reasonable person understand the words? Second:

ROUGH: A good vocabulary term for the day.

WOLK: Purposivism. Basically, yeah, you're like looking to, you know, what the purposes of the statute are, and you should be interpreting the text in light of the goals of the statute and things like that.

REICHARD: A focus on the spirit of the law instead of the letter. More policy-oriented than the semantics-based approach of textualists.

WOLK: You actively can update a statute over time. It's the least adopted view.

ROUGH: That approach applies a present day social, political and legal context to the statute. As a lawyer, it’s good to know not only how you interpret statutes, but how others do too!

WOLK: I learned just how people who interpret statutes differently than I do, how they think. And so you know, when you're reading or if you're arguing in front of a judge who thinks differently than you do. You're not just sort of trying to convince them that they're wrong, but just like having a better understanding of what principles matter to them, or what values that they're considering when they're interpreting a statute.

REICHARD: After law school, Wolk clerked for two years in the federal court of appeals. Then, in 2019, she got one of the most elite, hard, and fun jobs in the legal profession for young graduates: a clerkship with Justice Clarence Thomas.

ROUGH: She’s the second blind person and the first blind woman to clerk for a Supreme Court justice. The previous blind clerk was in 2008. In one sense, not too long ago. In another sense, ages ago.

WOLK: So technology now moves very, very fast. And so it can be the case that, you know, you have a system that works, and then all of a sudden, one day, the app updates or the whatever, the software updates, and now everything is completely inaccessible again. Those types of access barriers, they’re still very prominent, especially in the law, which was traditionally pretty open to folks who are blind.

WOLK: Trials used to be about oration and the skilled lawyer who stood up and told the story. And now it’s like you have the graphics and the power points and all of these things. It’s just a product of our changing world. But all of those things can pose access barriers to someone who has the same exact skill as a sighted person but they just might not be able to access software because of problems with the design of the software. So I think that's just really important for anyone who, you know, cares about inclusion of folks with disabilities to bear in mind.

REICHARD: Wolk says Justice Thomas was one of those people.

WOLK: I do think Justice Thomas, he's a really great example of that. He knew I could perform the functions of a clerk that I needed to perform. If anything came up, that was an access barrier issue, he made it very clear, it was not a reflection on me. He understood that it was something beyond my control, and something that we would need to work on together to fix.

ROUGH: When she clerked for Justice Thomas, she used her running time to draft work and puzzle through legal problems in her head.

WOLK: So there’s a lot to process and to have your mind wrapped around! When I was running, a lot of it was sort of planning out in my head, especially if you're working on, you know, drafting an opinion. How can I write this in a way that will make sense? Or how can I organize my thoughts in a way that will make sense to someone who doesn't know anything about the case? Or sometimes you would just need to step away, you turn to something else and all the sudden the answer just clicks in your mind.

ROUGH: Wolk has a good sense of who she is and Whose she is. She has a strong faith in God.

REICHARD: She says her faith affects what she does in the broadest sense.

WOLK: I think the law has a lot of things that transfer very well over to my faith. ​​You often take oaths to uphold the Constitution, or you have duties to your clients. Basically, these promises, and I think that my faith helps me to approach those with the appropriate level of gravity and to make sure that, you know, when I'm serving as a counselor or an attorney or an advisor, you know, I really am doing it from a place of service with an understanding that I've given someone my word, you know, that I will do these things, and I need to be I need to treat that with honor and do the right thing.

And a teaser for the next Legal Docket Podcast? The case of the foul-mouthed cheerleader who took her case for free speech to the Supreme Court.