People across the country are beginning to raise backyard poultry

Garrett Luck and his hen house near Arlington, IL. Photo by Paul Butler 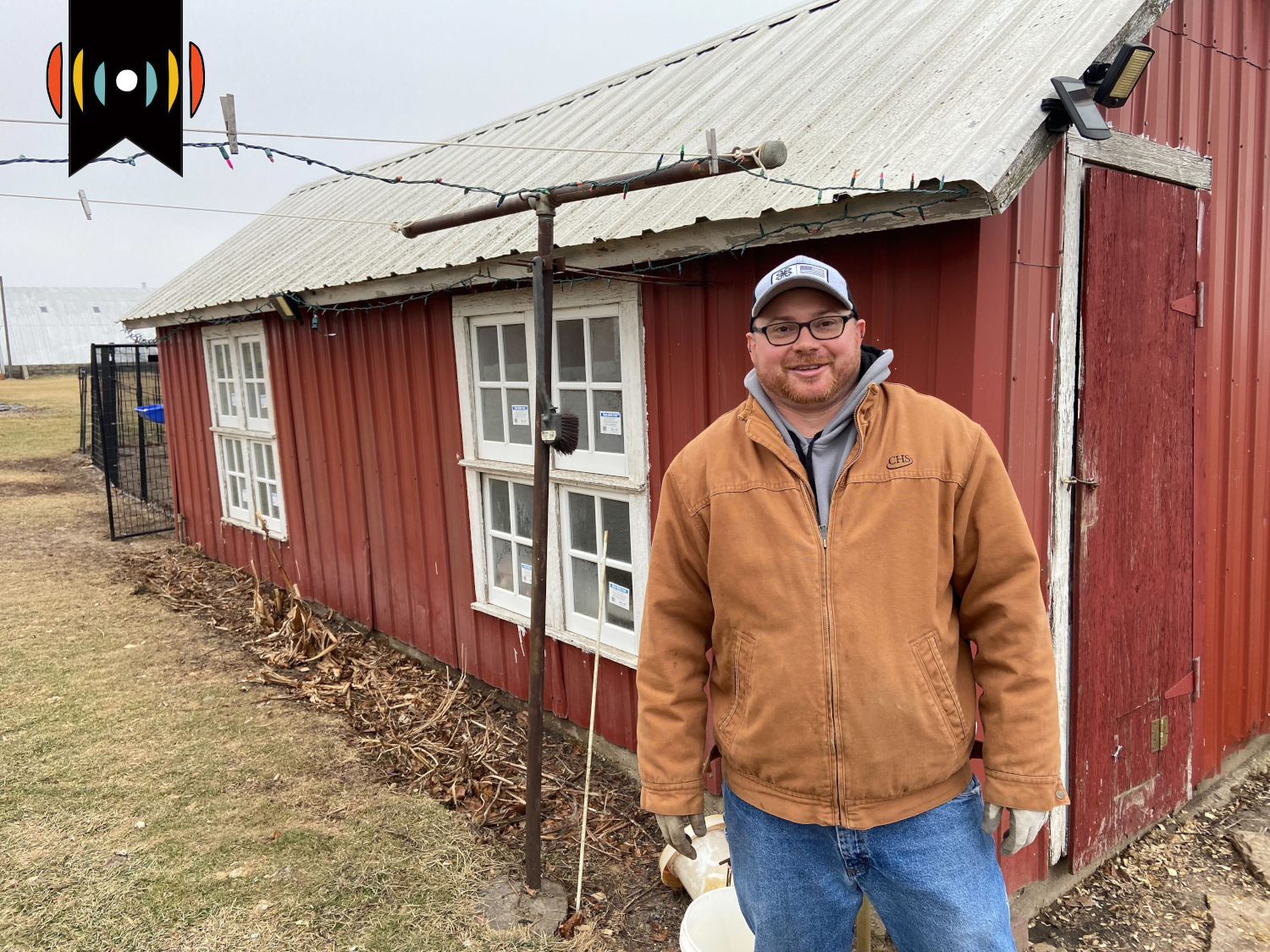 MARY REICHARD, HOST: Today is Wednesday, January 25th. Thank you for turning to WORLD Radio to help start your day.

NICK EICHER, HOST: And I’m Nick Eicher. Coming next on The World and Everything in It: chickens in the backyard! And no wonder. Last January, the average price of a dozen eggs was about $1.50. Now, it’s nearly triple, with some places in California topping $7 a dozen—Hawaii, $9, can you believe it?

REICHARD: Yes, that’s the sticker shock that’s leading many people to consider raising their own egg layers, especially as many towns have cut restrictions on keeping backyard chickens. WORLD’s Paul Butler has our story.

PAUL BUTLER, REPORTER: Garrett Luck, his wife Lauren, and their five kids live in north-central rural Illinois. They have a hen house full of chickens…

LUCK: It started with four maybe three years ago we got them for the kids for Easter and then my wife decided we needed more. Next thing I know we got 40…

This morning, Luck is collecting eggs on his own. The rest of the family is gone for the weekend.

LUCK: Let me grab some eggs. I generally grab them once a day. During the spring and summertime you know we get 30-35 eggs a day, but now it's much less. I mean sometimes it's five. Sometimes it's 15. Sometimes it's two.

This morning, it’s a little less than a dozen. The cold air and the freshly laid pine chips effectively mask the smell of chicken manure. As Luck lifts the feed bin lid, a small hen hops into the container. The rest mill around waiting for breakfast. 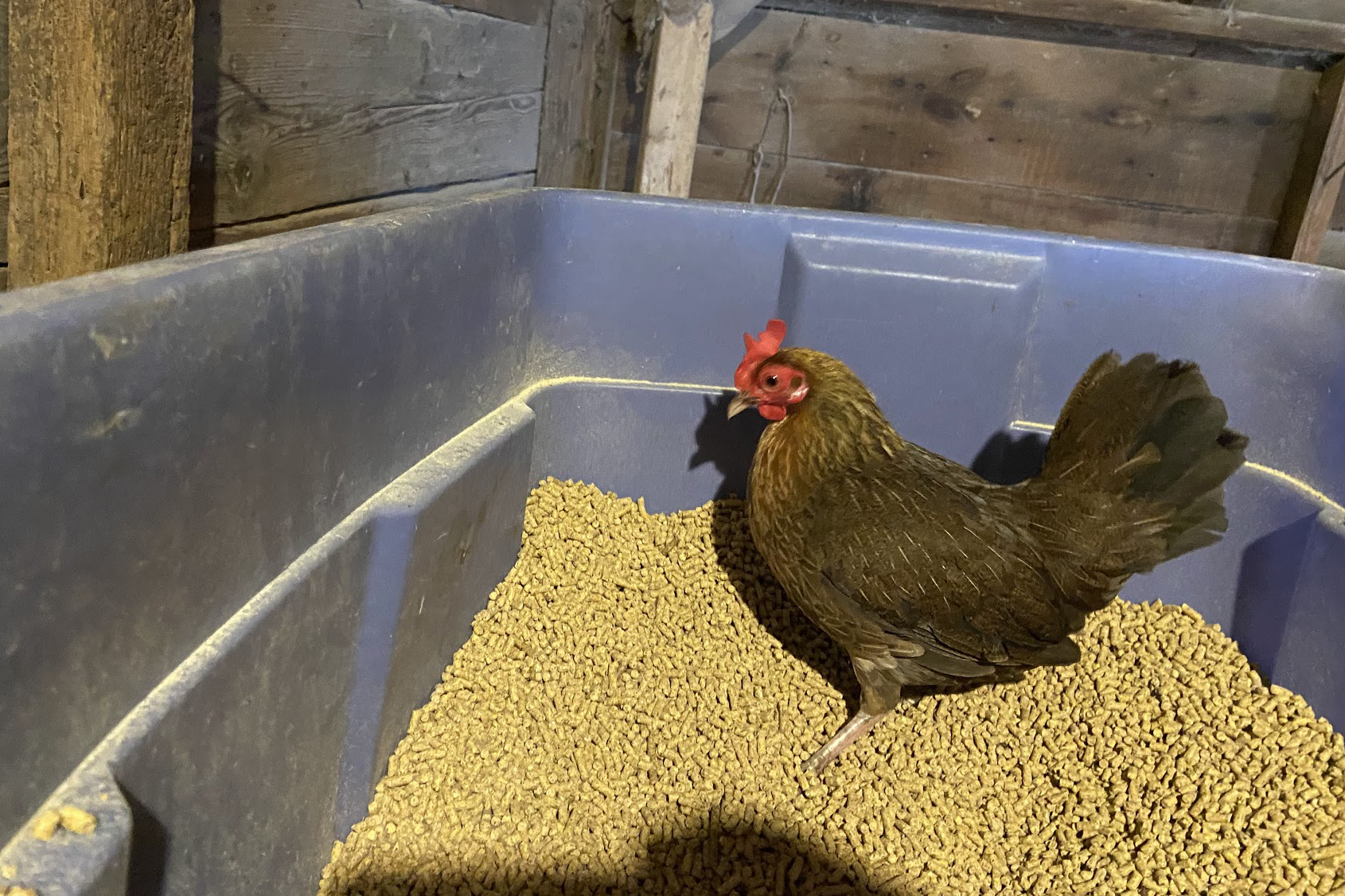 LUCK: Some are dark brown. There's tans, there's greens, there's blues, so she wanted them to look pretty… 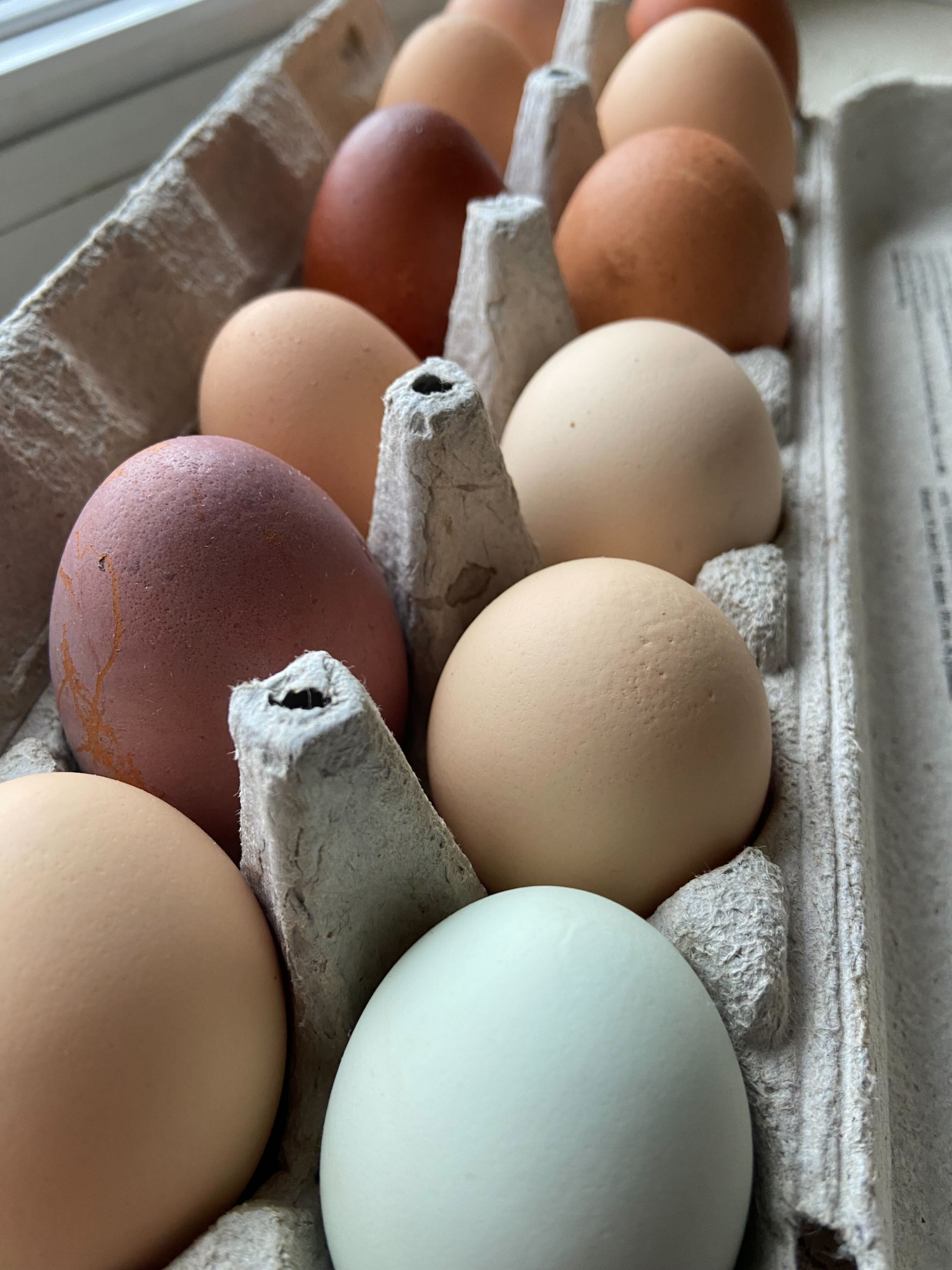 Luck is a natural gas technician by day…and a hobby egg producer when he’s off the clock. He raises chickens first and foremost to provide eggs for his own family. He likes them hard boiled, Lauren prefers them over easy, and the kids: scrambled.

But especially during the warmer months, he has many more eggs than he can use, so he sells them to family and neighbors.

LUCK: We probably got 20 different families or so that get them from us. People from the gym, neighbors down the road, of course mom and dad and then my wife's parents, they get them… 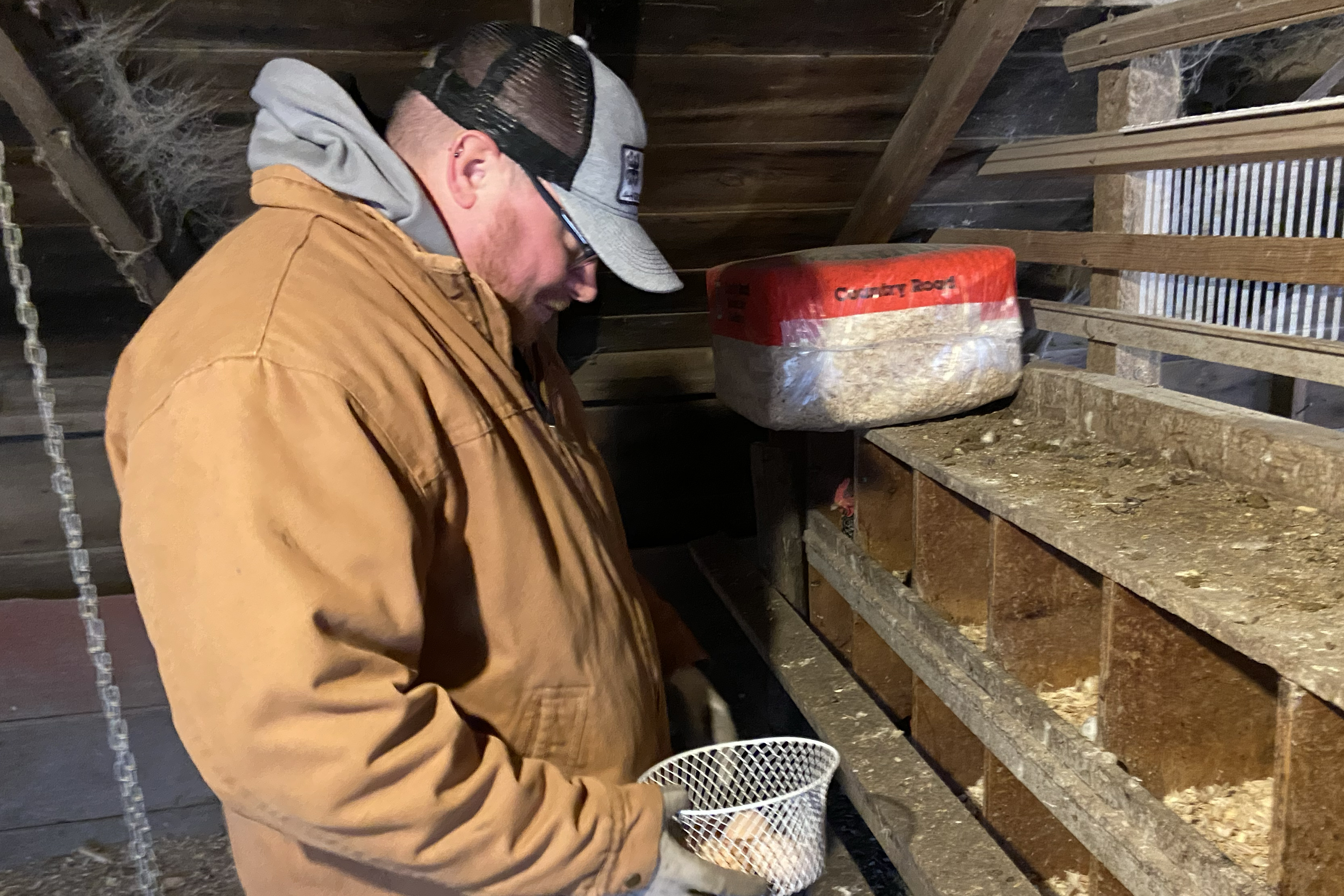 During World War II, keeping backyard chickens was encouraged as a patriotic duty.

VICTORY GARDENS NEWSREEL: Of all the weapons the united nations are using to win this war, food is among the most important…

After the war, chickens slowly disappeared from most of our backyards. But times of uncertainty often cause an uptick in interest. During the first year of the pandemic, hatcheries reported that their orders tripled. The current egg price trend seems poised to cause a similar reality.

PADGETT: I personally have talked to a lot of people that have asked me about keeping backyard birds, you know, to do the fresh eggs because the egg prices have gone crazy.

Norma Padgett is President of the American Poultry Association. She shows birds competitively. Padgett has kept poultry for more than 50 years. She’s seen people become interested in chickens for practical reasons—like a steady supply of eggs—but find unexpected companionship with the birds as well.

PADGETT: You know, you go out there every day on a regular basis, and you let them get out of their pens and graze around the grass and watch them and they've just got this little personality and, and some people even like they become their pet.

Padgett says if you’re interested in keeping backyard poultry, do some research before you begin—the APA provides many online resources.

Finding a group of fellow enthusiasts to learn from is also a good idea.

BELL: My name is Katie Bell and I am a local foods and small farms educator for the University of Illinois Extension…

Bell is leading a beginners poultry class in March…

BELL: We usually do one workshop a year. I think currently we have about 30 signed up for that program. So it seems like there's definitely an interest there right now. And so we're pretty excited. 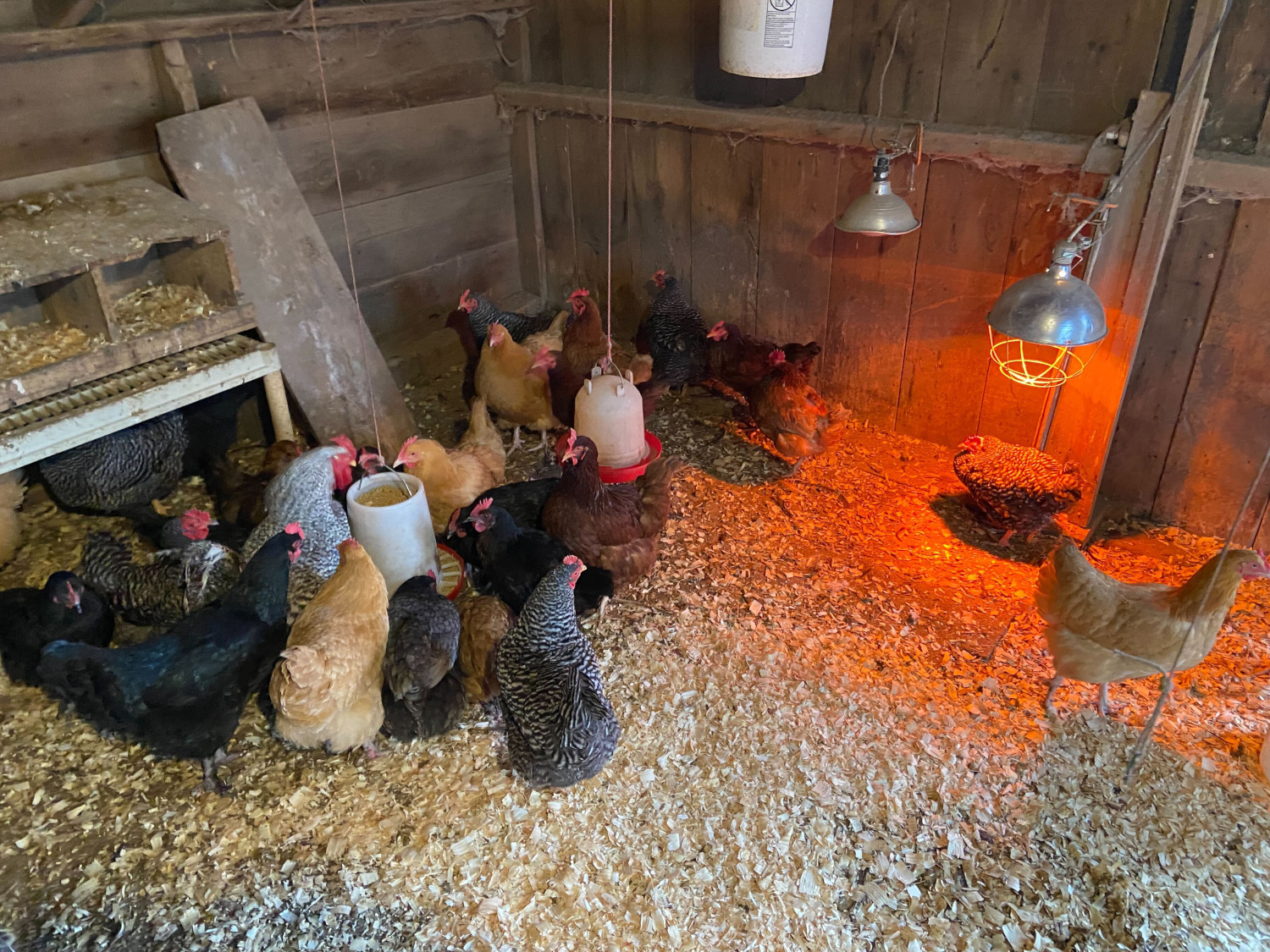 As an educator Bell is all about people taking control of their own food production. She has some helpful tips for anyone considering chickens.

BELL: Just start with a few and then you know expand slowly. Don't buy 50 of them if you've never had them before. Start small, then you can build up.

And just like any other animal under your care, you’ll need to provide for their basic needs.

BELL: Another thing to keep in mind is that, while yes, the eggs are technically free, you're gonna have to feed those chickens something, you're going to have to house them somewhere. So upfront costs are something that you want to look at.

Bell frequently reminds people that if they’re buying chicks, they won’t start getting eggs for about six months and it’ll be another six months to a year before the birds hit their prime. If you buy mature chickens, both Bell and Padgett encourage you to buy them from reputable sellers—so you don’t end up with unhealthy or old birds. And if you have neighbors that live close by, Katie Bell says you should talk with them before jumping in.

BELL: Hens you know...they make noises. So making sure your neighbors are aware of what's going on. Inevitably they will get out. Maybe in these times, a free dozen eggs every so often goes a long way to making friends.

SOUND OF COMING INTO THE HOUSE/TURNING ON THE FAUCET

Back at the Luck home, Garrett is in the kitchen…rinsing off this morning’s eggs.

LUCK: [WATER RUNNING AS HE’S CLEANING EGGS] This was just kind of a hobby for us. It's a labor of love. There's not a whole lot of profit to be had. The kids, they help out a lot, to give them something to do and teach them a little something.

Even his youngest can do the chores. He says chickens are a great introduction to keeping livestock and building responsibility in his young family. He learned that himself growing up around pigs, but he prefers the hens.

LUCK: Just treat them like you would anything else I guess. Try to take care of them as best you can. And then they give you a little return.