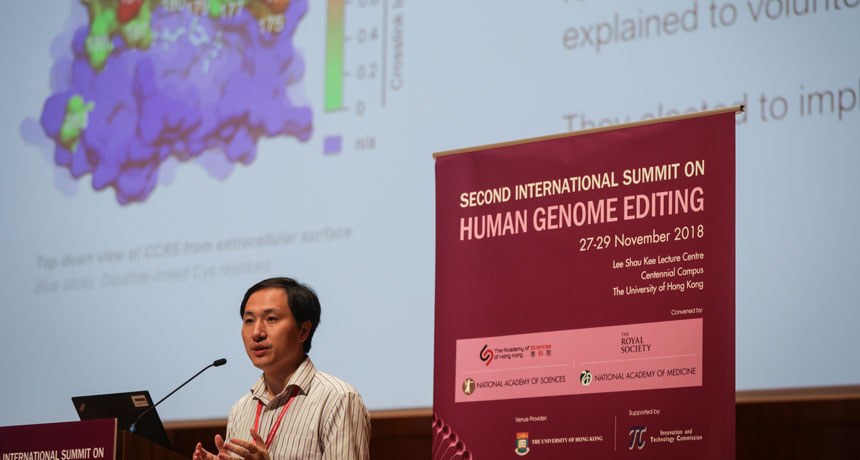 MARY REICHARD, HOST: Today is Wednesday, February 20th. Good morning! This is The World and Everything in It from listener-supported WORLD Radio. I’m Mary Reichard.

JANIE B. CHEANEY, COMMENTATOR: It’s a story worthy of a tech-thriller screenplay: a brilliant young scientist cuts through red tape and the cautions of his tradition-bound peers to perfect a life-saving technique. Under a cloak of secrecy he presents the world with its first gene-edited babies—twins who are immune to the ravages of HIV-AIDS.

Or, from another perspective, an opportunistic young researcher lies to his own experimental subjects, skirts the gatekeepers, forges documents, misleads authorities, and launches a PR campaign to announce his achievement—shortly before disappearing from public view. Who is this International Man of Mystery?

His name is He Jiankui. Last November he announced that he had successfully altered the genome of twin girls in China using the CRISPR method. CRISPR is a gene-editing technique practiced on lab animals since 2013. If used to alter a sperm, egg, or embryo, that change will be a permanent part of the subject’s genome. It will replicate in every cell of the body and pass on to the subject’s descendants.

This is what He Jiankui claims to have done, for the first time, on human subjects: extracted twin embryos with one HIV-positive parent, “snipped” the gene which can serve as a gateway to the AIDS virus, and implanted the embryos in an unidentified woman who delivered the babies last fall. After the fact, the researcher stunned the world with his announcement and a series of YouTube videos.

But he followed few—if any—of the accepted protocols. That’s why his peers are both skeptical and furious.

But there’s no ruling set of guidelines in science. So those who are horrified can only sputter indignantly.

Fresh upon He Jiankui’s announcement, the Trump administration made one unrelated to it. It’s an educational initiative to “promote STEM literacy.” STEM is the acronym for Science, Technology, Engineering and Math.

Parts of the initiative sound promising, but most of the executive summary serves up tired clichés: “preparation for the evolving workplace,” “computational thinking,” and, of course, “diversity, equity, and inclusion.”

What about moral responsibility? Not one word, in the entire 1,100-word summary.

There’s no way to police “science.” It’s an abstract entity. But what if budding scientists, along with their STEM classes, learned that life is more than the evolving workplace and the body more than computational thinking? Could they police themselves?

A coherent philosophy of the limits and responsibilities of science won’t stop a renegade researcher, but it could set some useful guidelines. Who will launch that initiative?