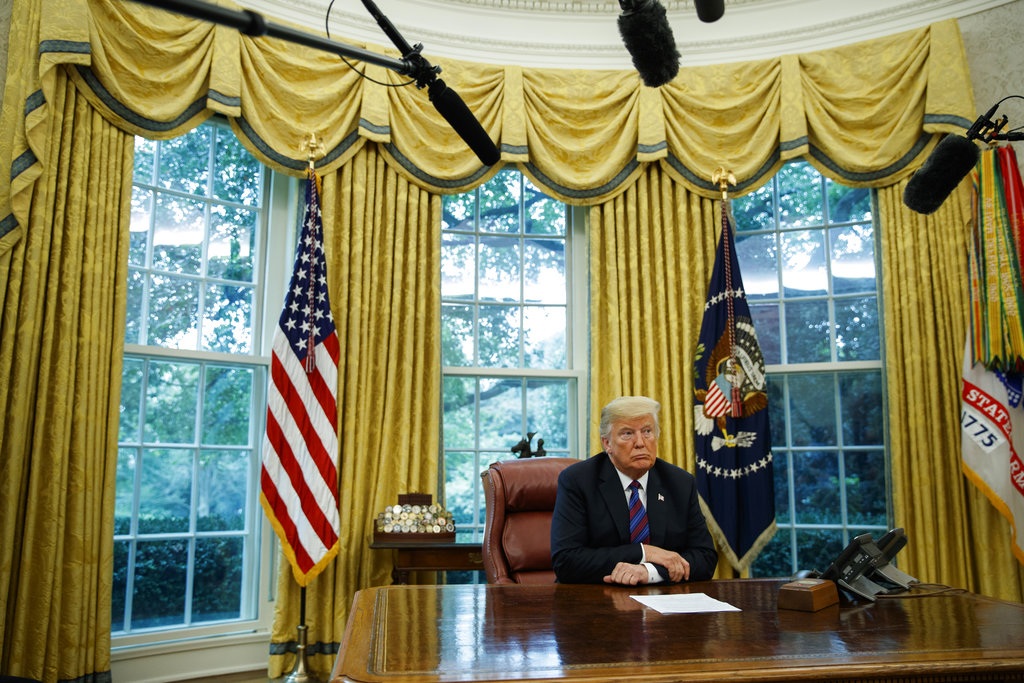 MARY REICHARD, HOST: Today is Wednesday, September 5th. Good morning! This is The World and Everything in It from member-supported WORLD Radio. I’m Mary Reichard.

NICK EICHER, HOST: And I’m Nick Eicher. President Trump has his supporters and his detractors, as every president has.

But, despite disagreements, evangelical Christians can unite around what’s important and true.

JANIE CHEANEY, COMMENTATOR: Here’s one thing I know: Donald Trump’s presidency is one wild roller-coaster ride flashing with neon. By contrast, a Hillary Clinton presidency would have been stop-and-go traffic in a dingy shade of gray.

That’s the limit of my foresight, though. Three years ago I mocked the possibility of a Trump campaign in a column titled “Year-round silly season.” Not many expected he would run, few expected he’d be nominated, and almost no one expected him to win. Silly us!

Christians, especially the much-maligned, ill-defined “evangelicals,” still don’t know what to make of it. That’s why David French’s recent National Review piece titled “An Open Letter to Trump’s Evangelical Defenders” raised a bit of a ruckus.

French is a committed Christian and an author who is always worth reading. While he understands why Christians voted for the president—and while he at times praises the president for good policy—it’s beyond the pale to make excuses for the president’s denigrating tweets and sordid past. Godly causes are secondary to godly behavior in word and deed, and if Christians hitch their hopes to a philandering, prevaricating, deliberately provocative figure, they will have earned the scorn of unbelievers. Not to mention a blow to their credibility that will take at least a generation to live down.

Those concerns are an interesting contrast to an “Open Letter to Young, ‘Post-Partisan’ Evangelicals” from 2012—also by David French. Back then, he called out those 20-something hipsters who refused to take up arms in the culture war. “I used to be you,” he wrote—committed to Christ, non-combative on social issues. But he had come to realize that being pro-life or pro–traditional marriage was an all-or-nothing commitment.

Now he shakes his head over what’s happened to the evangelical image.

The two open letters don’t really contradict each other, but taken together they illustrate how difficult it is to thread the needle of public policy with private virtue. French accuses some of Trump’s evangelical cheerleaders of patronizing the president in order to get close to power. That may be true, for some. For others, how can they advise power without getting close to it?

French rightly mocks comparisons of Trump to King David, another flawed ruler. A better comparison is to King Nebuchadnezzar, a pagan addicted to flattery and prone to recklessness, who came to respect godly counsel from Daniel and his friends—and to respect their God.

But regardless of what he is, the worst thing we could do is let him divide us. Whether never-Trumpers or Trump-stumpers, Philippians 2:3 still applies: “In humility consider others as better than yourselves.”

The last 50 years of American politics should convince us that presidents do not make anyone great. Only Christ does, and on that we can all agree.

(AP Photo/Evan Vucci) In this Aug. 27, 2018, photo, President Donald Trump listens during a phone call in the Oval Office of the White House.