Is America set to break a voting record?

WORLD Radio - Is America set to break a voting record? 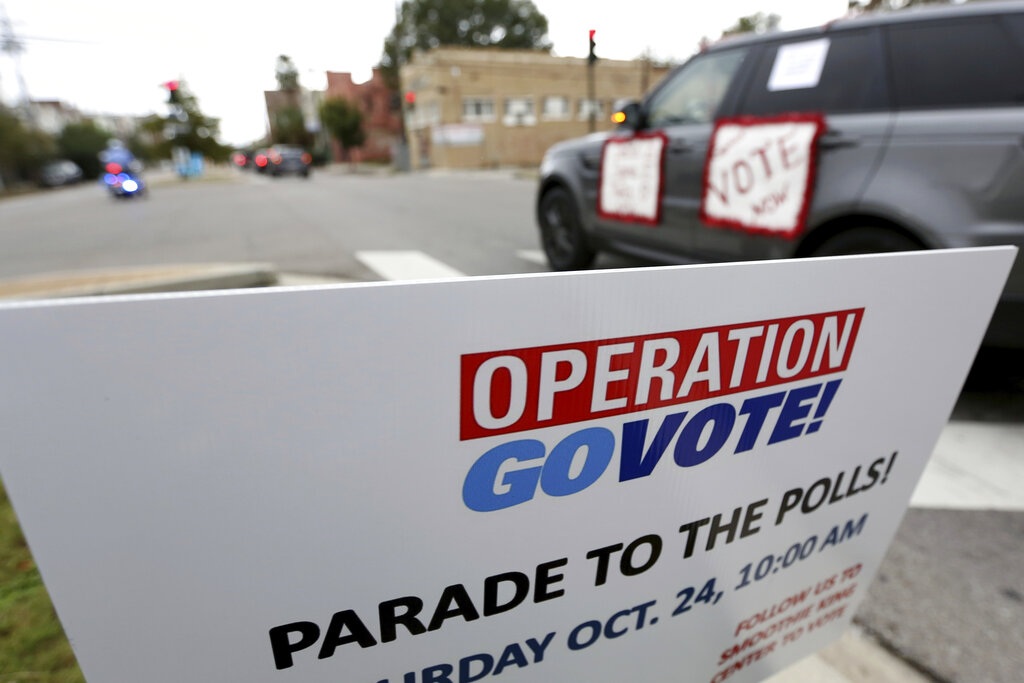 We’re so glad to have you along for today’s edition of The World and Everything in It. Good morning, I’m Mary Reichard.

Americans get to vote in more elections than anyone in the world, but they’ve also got a low participation track record: the second lowest voter turnout of any democratic country. Only Switzerland is lower.

SARAH SCHWEINSBERG, REPORTER: Iowa is a battleground state both for the presidential election and the U.S. Senate. Incumbent Republican Senator Joni Ernst is in a tight race against Democrat Theresa Greenfield.

For Iowa voters, the pleas for support from both campaigns are incessant. Bailey Van Roekel is a young, stay-at-home mom living in Des Moines.

VAN ROEKEL: We get a lot of mail at our home from both candidates running. I do get a lot of calls from numbers that I don’t recognize, so it makes me wonder if those could be people campaigning.

And she’s not just hearing from candidates. Van Roekel’s social media feeds are also full of calls from celebrities, athletes, bloggers—even the platforms themselves!—to get out and vote.

VAN ROEKEL: I have noticed more hashtags on Instagram, hashtagging #vote. A lot of Instagram influencers talking about politics and the importance of voting. Facebook and Instagram at the top of your newsfeed, they make sure that you know how to get registered to vote.

This year, campaigns and Super PACs have spent a record amount on elections: $11 billion dollars. The 2016 elections cost just $7 billion. And voting activist organizations are teaming up with social media influencers to get people to the polls.

Voters appear to be on track to set their own record: 60 million people have already cast their ballots. Surpassing all of the early voting ballots cast four years ago… and there’s still a week to go.

Based on early voting trends, election analysts project more than two-thirds of eligible voters could end up voting. That may not sound all that impressive, but it could be the highest voter participation in 60 years.

So is all that campaign spending and social media chatter what’s getting more people to the polls this year?

Not necessarily, says Donald Green. He’s a political science professor at Columbia University and the co-author of Get Out the Vote.

GREEN: So even though the academic research literature really calls into question whether the enormous amounts of money that are spent on TV actually pay dividends, still that is the focus of about 80% of the funding of these highflying campaigns.

Phone calls and door-to-door canvassing actually yield some of the highest voter returns on top of being some of the least expensive strategies.

GREEN: The most effective tactics tend to be the ones that involve authentic, heartfelt personal communication between people.

So then is social media generating more voter turnout?

Yes and no. Paul Bentz is a political consultant in Arizona who has run numerous state and local campaigns. He says most of the electorate still isn’t on social media. So for now, it doesn’t draw the number of eyes necessary to win an election.

BENTZ: More than half of the Arizona electorate will be over the age of 55. You’re lucky they’re on Facebook.

And for those who are engaged online, digital and social media ads don’t prompt as much voter action as other tactics like mailings and emails.

But social media platforms do help facilitate something that does work: human-to -human contact and conversations. Here’s Donald Green at Columbia University.

GREEN: The notion that you’re going to mobilize people by putting things in their newsfeed is an exaggerated hope. On the other hand, if we’re friends on a kind of a site then we’re kind of credible messengers to encourage each other to vote and to buck up enthusiasm about the election.

Consultant Paul Bentz says that enthusiasm is really at the heart of what could be the highest voter turnout in decades. And President Trump tends to generate a lot of enthusiastic conversations between people—for and against him.

BENTZ: There is no turnout mechanism as effective as the president.

And there’s another reason so many more Americans are ahead of a typical voting schedule.

Omar Parbhoo studies voter engagement at a civic think tank called ideas42. He says due to coronavirus fears and hiccups, states have opened up mail-in and in-person voting earlier than normal. They want to make sure all ballots can get counted in time. Voters are worried about that as well.

PARBHOO: It also has to do with a lot of the discourse around whether voting is safe and secure, which it is, or discussions around the post office and whether it can deliver ballots and if you send it in early enough, it can. Those are bringing a lot of attention to voting in a way we haven’t seen before.

So then if record spending, a motivational president, and more time to vote still only gets two-thirds of Americans to participate, will the country ever near 100 percent?

Omar Parbhoo says that will take a revival of civic engagement between elections.

PARBHOO: If we can figure out a way to make sure that people look at their their engagement in their community as a long term, ongoing process. Hopefully, people won’t look at voting as a one off thing every few years, but rather a part of a continuum where they are getting their voices heard.