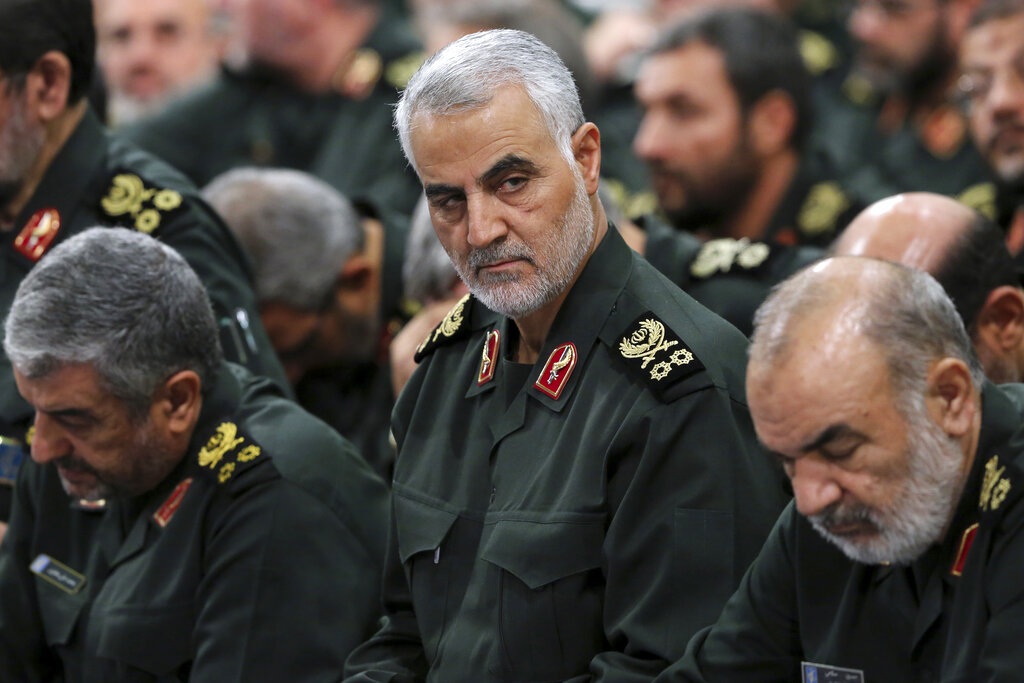 MARY REICHARD, HOST: It’s Tuesday the 7th of January, 2020. Glad to have you along for today’s edition of The World and Everything in It. Good morning, I’m Mary Reichard.

MEGAN BASHAM, HOST: And I’m Megan Basham. First up: fallout from the killing of a top Iranian general.

Qassem Soleimani was a member of Iran’s Revolutionary Guard and led its expeditionary Quds Force. His resume includes a long list of terror activities. He’s most recently accused of ordering attacks that killed American troops in Iraq.

REICHARD: U.S. forces killed Soleimani in a drone strike on Friday. That has inflamed tensions in the Middle East.

For some perspective on the strike and its possible repercussions, WORLD editor in chief Marvin Olasky talked to George Friedman. Friedman is a geopolitical forecaster who founded the private intelligence firm Stratfor and now runs Geopolitical Futures.

MARVIN OLASKY: When you heard the news, that general Soleimani had met his earthly reward, what was your instantaneous reaction?

So my first thought was, this is not how you plan a major attack. This is what it looks like when you’re panicking. And from there the question, “What were they planning?” came about. Well, they’re not in, really, a good position.

But then the question became, “Why would the United States kill him, instead of capture him?” He was at a place where he was really captured outside the airport. So, these are the mysteries that came to my mind, and they’re still there.

OLASKY: So, would it have been possible to capture him?

I know one thing: Heads of intelligence, the head of Al Quds, his mind filled with the secrets of Iranian intelligence operations, does not go to a meeting in an unsettled country where he might be captured.

OLASKY: Is it that surprising if, let’s say Iraq has become, to some extent, a tributary of Iran?

FRIEDMAN: Well, obviously it’s not enough of a tributary of Iran, to make it fully safe. And the issue really is, there’s just some things that senior intelligence people don’t do. It would be like in the Cold War, the head of U.S. intelligence deciding to go to a meeting in Bulgaria. Probably not wise.

So, the issue here is what is going on in Iran, that would cause him—a very, very good professional—to take this sort of risk. He didn’t do it casually.

OLASKY: And that’s still a mystery?

FRIEDMAN: It’s, well, we know that the Iranian economy is in shambles because of the sanctions. We know there has been a great deal of unrest. We know that the sphere of influence Iran has developed, which ran through Iraq, Syria, and Lebanon. There’ve been riots in Lebanon. The Israelis are hammering the Iranians daily in Syria, and the Russians are not protecting them.

And in Iraq there were anti-Iranian demonstrations. So, we know that the Iranian position is under tremendous pressure. Normally, at this time, you protect your top assets, and you send other people. So I’m trying to imagine a meeting that required or allowed the head of Iranian intelligence to go into harm’s way. Or worse, capture. And instead of sending a deputy or several layers down. So, from the intelligence point of view, this is not the way it works, but it’s what they did.

OLASKY: What would cause panic?

FRIEDMAN: Well, let’s assume for the moment that the United States, in its previous two or three bombings—which it carried out—indicated a high degree of knowledge of Iranian assets. And that, somehow, the Iranians are wondering if the U.S. has penetrated security for Iran. Well, we seem to have been hitting targets.

And that seems to disturb them, but even more disturbing is that he was meeting the head of Iraqi intelligence. And if you’re going to have these two guys meet, you’ll do it in Tehran. Or someplace safe. You will not do it outside of the airport. I mean, there is something very odd about all this, and I’m not sure what it is.

We have to remember that Iran is going through a deep internal crisis. They have been arresting people, they’ve been releasing people, there have been debates, and so on. Everybody assumes that this regime, this Shiite Islamic regime, is secure. It’s not. So, certainly it appeared to be going in that direction, then took a turn, and that turn really came from the United States.

When the United States withdrew from Iraq and president Trump basically said, I don’t want to be involved in a 19th year of war. Okay? Suddenly Iran had a sphere of influence, that ran from Iran to the Mediterranean. The United States formed an anti-Iranian coalition, a very strange one consisting of Israel, Saudi Arabia, and the United Arab Emirates. And thus far there has been a standoff with the United States, primarily not using military force, but squeezing the Iranian economy. Very hard, very effectively.

So, the Iranian intelligence people are now saying, how badly penetrated are we? So, when they see the killing, they don’t see what a horrible thing this is and everything else. They want to know how the U.S. intelligence knew this meeting was taking place. And there are many inside of Iran who are charging each other with duplicity, with working with the enemy, and so on. At this moment, everybody is, of course, shocked that he was killed. But the real question that everybody’s asking is, who betrayed him?

OLASKY: What do you think Iran’s response will be?

FRIEDMAN: Well, right now they are going to be threatening external responses. They may do one, but they want to know: What was he doing there? Did, how many know he went to this meeting, this dangerous meeting? Was that authorized by anyone? They want to know how the Americans got wind of it, what security failure was there.

So what’s going on right now in Iran, right now, is a witch hunt. It is who knew what, when? Who did they speak to? They’re going through all the records, all the movements, and everything else. Something went terribly wrong to a regime that has had things going terribly wrong for a year or two.

OLASKY: So the view we tend to get in The New York Times—from my cursory reading—and some other publications is: the sky is falling. This is a terrible thing. Iran is very powerful. And, oh my, oh my, oh my. When you, when you read those reports, do you chuckle, or what?

The United States, for that matter, doesn’t have a military force to challenge the Iranians. Iran is the size of Alaska and Texas combined, has 80 million people. We’ve learned, hopefully, that occupying a hostile country is hard. And it doesn’t always work out as you’d want, so, we’re not going to go to war. They may strike at us, but we have shown a remarkable capability of striking at them. So, forgetting New York Times, and their mistake, there’s a huge psychological crisis in Iran. Their security apparatus, which is one of the best in the world, has been compromised.