How did election-denying candidates perform?

The mainstream media labeled a number of congressional candidates as “election deniers,” but that label was applied inconsistently and often incorrectly

An election worker verifies a ballot on a screen inside the Maricopa County Recorders Office, Nov. 10, 2022, in Phoenix Associated Press Photo/Matt York 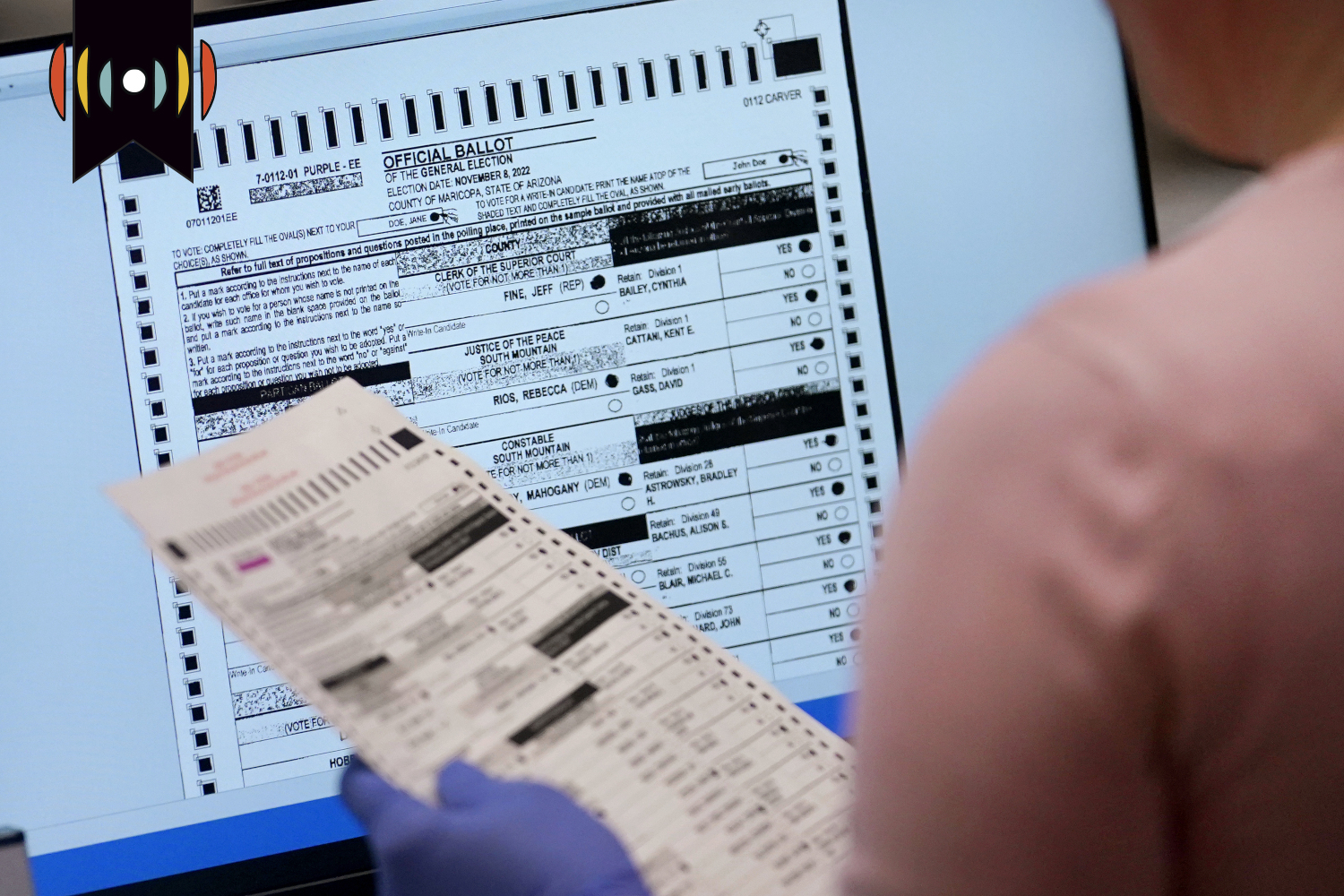 NICK EICHER, HOST: Coming up next on The World and Everything in It: breaking down the midterms.

A number of candidates this time around made the last election a centerpiece of their campaign. The mainstream media labeled them “election-deniers.”

But that label was applied inconsistently and often incorrectly. Brian Hawkins, for example. He was one congressional candidate from California, who was mislabeled. He didn’t make any claims about the election in his campaign. Our Washington Bureau reporter Leo Briceno interviewed him:

BRICENO: Would it surprise you to know that both the Washington Post and Business Insider listed as you as an election denier?

HAWKINS: They listed me as an election denier? I didn’t know either one of them had mentioned me. [Laughs]

MARY REICHARD, HOST: Leo Briceno joins us from Washington, DC. He talked to Hawkins and others about how claims of election fraud influenced the 2022 midterms. Leo, welcome!

LEO BRICENO, REPORTER: Thanks! It’s great to be here.

REICHARD: Leo, what did you find out about so-called election deniers in the 2022 midterms? Did you see a pattern from the voting data as to how they performed?

BRICENO: Well the preliminary data shows that people who raised concerns about election fraud didn’t perform well in winnable situations. There were a number of races where a congressional seat was up for grabs that were decided by 15 points or less. Normally, those aren’t considered close races, but that’s a small enough gap where you could say both candidates had a shot at the seat. Perhaps not a great shot, but a chance nonetheless. In those cases, almost two thirds of quote-unquote “election denying” candidates lost their race.

REICHARD: How did you determine that?

BRICENO: We took a list of candidates from Business Insider and their published body of work identifying who these candidates were and where they were running. The Washington Post had a list, Bloomberg News had a list, the polling site FiveThirtyEight had a list—there were multiple attempts to find out who raised concerns about voter fraud.

So from Business Insider's count, we looked at the numbers of each one of those races, something like 260 different races, and picked out the ones that either won or lost by 15 percent or less. That preliminary research allows us to see the pattern that these candidates weren’t doing too great in these closer contests. But then again, it’s a little difficult to say whether their stance on the election was the thing that led to their loss.

REICHARD: Why do you say that? I mean two-thirds sounds like there was a pretty clear trend.

BRICENO: Yes! The trend is certainly there. But there’re two elements we’ve got to consider when looking at these numbers. First off, the initial counts identifying these candidates weren’t perfect. Pastor Hawkins is a great example. He somehow got grouped under the “election-denying” label even though he told me he doesn’t believe the 2020 election was stolen. So that’s one issue, how many of these candidates actually denied the results from 2020?

REICHARD: I see. So we have uncertainties about how accurate the actual counts are. That’s the first reason, what’s the second one?

BRICENO: Yeah the second on these is that there are differing levels to the claim. Not everyone who was labeled an “election denier” necessarily thinks that President Biden is an illegitimate president. Some of them do—some of them say Trump should be in the Oval Office right now, but others are instead saying that voter fraud is an issue the country needs to address. Those are two very different claims… this ambiguity is something that’s reflected in these publication’s initial counts. They can be very, very different. The Washington Post, for instance, found 291 “election denying” candidates where Bloomberg only found 254. So there’s some gray area there about who is and who isn’t an “election denier.”

REICHARD: Hmmm that does complicate things. So what can we say definitively about these candidates and how they performed?

BRICENO: Yeah that’s a good question. And this will become more evident as the data gets crunched, but just from a preliminary look, it’s clear that voters in the middle didn’t gravitate toward these candidates, the ones that embraced the stolen-election claim. There’re also other topics and voting issues that likely helped voters make up their mind outside of this one issue. But I spoke with Ramer Gunner, the political director for the Republican Accountability Project about that. He says that from multiple focus groups he spoke with in swing states, that voters who were on the fence found the message of a stolen election was a hard sell.

RAMER: I don't want to say election denialism was the one factor, but the thing that we kept on finding, they are mad about crime and inflation and gas prices, particularly in Arizona and Nevada where the prices are higher relative to the rest of the country, so they were looking for a Republican to vote for. But when they were introduced to the Republican candidate, in a lot of cases, they didn't go for them.

Ramer really stressed the idea that swing voters don’t just make decisions based on the political climate. Even when they’re frustrated about the economy, the direction of the country, and feel let down by the Democratic Party, they still have to be able to relate to a Republican candidate to vote for them.

REICHARD: Very interesting. Leo Briceno is our reporter based in Washington, DC. Thanks Leo!