Patrick McDonald helps a customer at one of His Way’s four thrift stores. Larry McCormack/Genesis 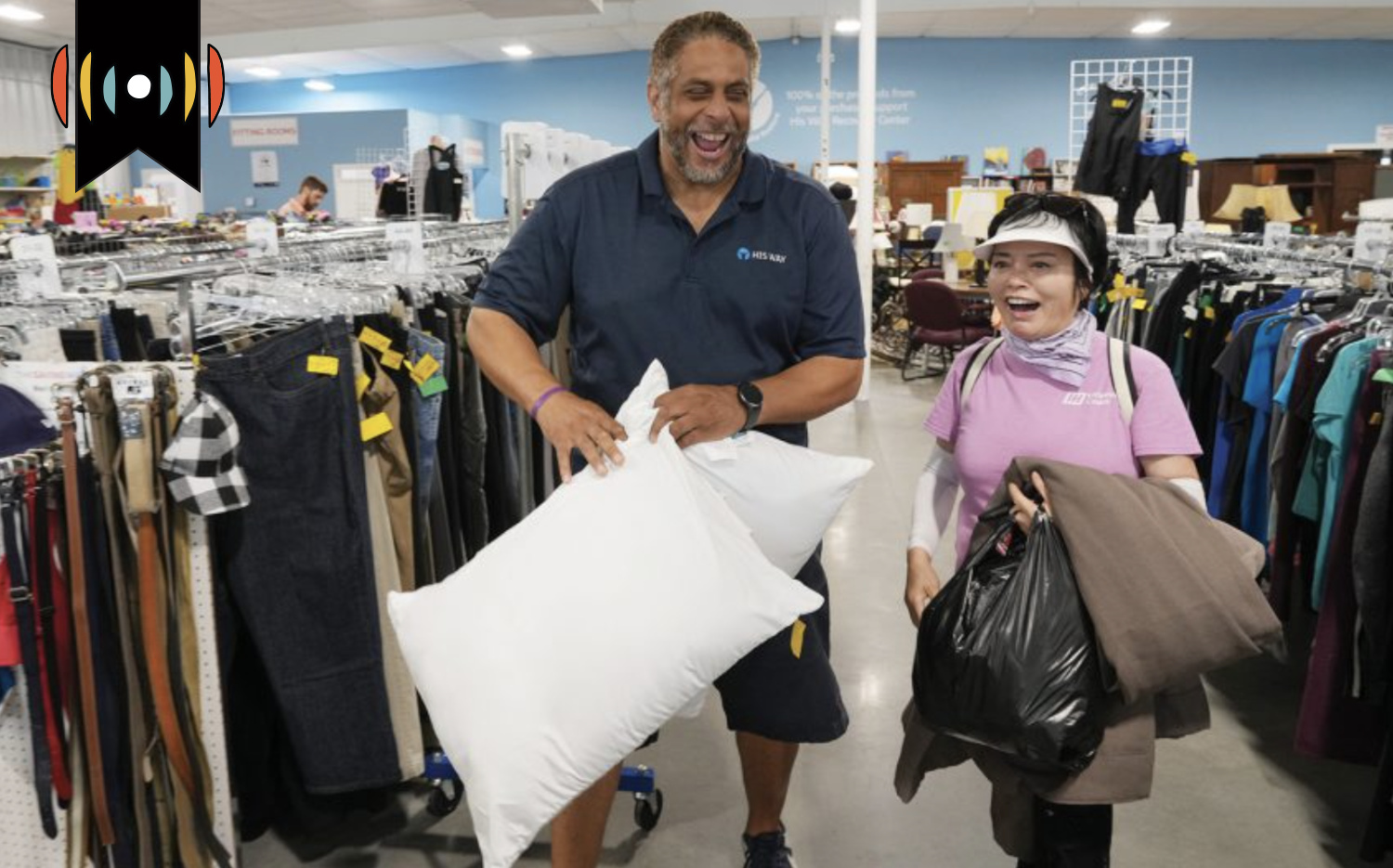 MYRNA BROWN, HOST: Today is Thursday, July 28th. Thank you for turning to WORLD Radio to help start your day.

PAUL BUTLER, HOST: And I’m Paul Butler. Coming next on The World and Everything in It: Hope Awards for Effective Compassion.

All this week we’ve been profiling this year's semi-finalists. So far we’ve heard about a New Mexico transitional housing facility, a Michigan pregnancy resource center for women and men, and a residential addiction rehab program in Idaho.

MCDONALD: I tried marijuana. Why do people do that?

ADDIE OFFEREINS, REPORTER: Patrick McDonald was 18 when he first tried cocaine. His friends taught him how to do it.

MCDONALD: And then one day I was with the right people, the wrong, the wrong people who said, Hey, you should cook your cocaine. And I was hooked on crack, and my body said this is what you've been looking for. My brain said You're finally happy you've arrived. And that just led to the next 40 years of well, 30 years of hell off and on.

McDonald became what he calls a “part-time crackhead.” His longest stretch of sobriety lasted 18 months. Addiction led to divorce. Selling drugs to support his addiction landed him in prison for over 5 years. When he got out, he did well for a while, fell in love, and remarried. Then, another relapse, another stint in jail, another divorce.

MCDONALD: And I've been to a number of rehabs that I never wanted to go to.

None of them worked. In 2012, McDonald faced one more mandatory rehab program. He didn’t want to go to His Way but he knew something had to change.

MCDONALD: The Christ centered approach was different from a mantra standing in a circle. And it was just different.

At the His Way recovery program, men battle addiction with a structured environment, a loving community and, most importantly, the gospel of Jesus Christ.

Tom Reynolds is the director of ministry for His Way.

REYNOLDS: In AA, you always introduce yourself and say, Hey, I'm Tom, and I'm an alcoholic kind of thing. And so your identity is always rooted in the problem, always attached to the problem.

His Way is different. It grew out of a Bible study called the Bridge Group.

But the leaders started to notice some difficulties. The men faced challenges that a twice-a-week meeting couldn’t handle: Some didn’t have jobs or transportation.

The leaders realized they needed to begin a residential program…but he had no idea how it should work. Reynolds asked the first men who came about their past program experiences—both good and bad.

REYNOLDS: And so I interviewed all of them kind of put together kind of what I heard from all that, and began kind of formulating what I thought would be a good structure.

The fundamental rule: everyone had to pass drug and alcohol tests. Other rules involved curfews, chores, and honesty. In the handbook, every rule is supported by scripture.

REYNOLDS: I think every one of the guys I interviewed I dismissed because they violated the rules that they told me that should be important to their recovery.

But more men trickled in. Some were homeless, former inmates, or still lived with mom and dad. Others were former military officers or business owners. Others never had career ambitions beyond drug dealing. Most had been in trouble with the law.

At His Way, men stay for 9 months. For the first 60 days, they don’t have contact with the outside world. Reynolds calls it a cooldown period.

Then, residents are required to start working. They’re expected to contribute $250 a week to cover living costs. His Way partners with companies in the community to find the men jobs. Others work at the organization’s four thrift stores.

REYNOLDS: Because ultimately, sobriety is not about the absence of drugs. And alcohol. Sobriety is about having a right relationship with God, and being rightly aligned, and that's about honesty, integrity, and so all those things, those are the real things. We're trying to focus on his character transformation. Because when that changes alcohol and drugs become irrelevant.

While in the program, the men are required to attend a local church. They also attend “family meetings” with a group of people who know the resident well and are supporting his sobriety. Here’s Tom Reynolds once again:

The teaching, discipleship, and worship have an effect. Since His Way began, about 200 residents have been baptized.

Still, setbacks are common. Only about 50 percent of the guys who start the program graduate. Some men receive a certificate but then go back to their addiction.

Patrick McDonald first graduated from His Way in 2012.

MCDONALD: And I got out and relapsed.

He came back and tried again. On day one, McDonald sat in the 8 a.m. Bible class with Reynolds.

MCDONALD: It's weird because I've got a drug problem. I come to His Way, and you send me to a Bible class. Why? And I'm thinking I want to get high. Why am I sitting in this class?

But soon, he started taking notes.

MCDONALD: Well, that was interesting. That's a good point. Man, I want to get high. And, by week three. It's like, wow, this is a great class. I never knew that.

By week four, he called his parents and asked them to send him a new Bible. He read it every night.

McDonald’s days are now full working as a house manager at His Way and an assistant manager at the Saving Way thrift store, where he supervises 10 other guys and frequently shares his testimony with the other workers.

BUTLER: Well that’s our fourth and final semi-finalist in this year’s Hope Awards for Effective Compassion. One of the ministries we’ve profiled this week will get a check for 10-thousand dollars. Which one? Well, that’s up to you. Visit wng.org/compassion and vote for the organization you’d like to see blessed in this way. Voting is open until August 12th. Thank you.