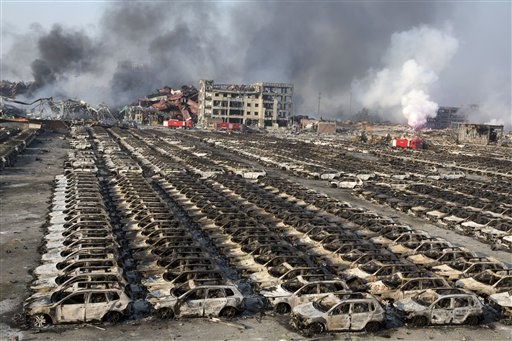 MARY REICHARD, HOST: And I’m Mary Reichard. Coming next on The World and Everything in It: the WORLD History Book.

Today, the five year anniversary of a deadly explosion in China. Plus, 75 years ago, the U.S. drops two atomic bombs on Japan.

But first, 85 years ago, the U.S. government commits to a financial safety net for the elderly. Here’s Paul Butler.

ROOSEVELT: Today, a hope of many years’ standing is in large part fulfilled…

ROOSEVELT: This social security measure gives at least some protection to 50 millions of our citizens who will reap direct benefits through unemployment compensation, through old-age pensions, and through increased services for the protection of children and the prevention of ill health.

The first two years of Roosevelt’s presidency were marked with banking and employment reforms—in hopes of promoting relief and recovery due to the Great Depression.

Beginning in 1935, Roosevelt turns his attention to social problems. He unveils a handful of more controversial programs, including the Social Security Act.

ROOSEVELT: We can never insure 100 percent of the population against 100 percent of the hazards and vicissitudes of life, but we have tried to frame a law which will give some measure of protection to the average citizen and to his family against the loss of a job and against poverty-stricken old age.

The act withstands two Supreme Court challenges, and over the next 30 years is amended 10 times by the U.S. government, dramatically growing the scope and level of benefits.

ROOSEVELT: It seems to me that if the Senate and the House of Representatives, in this long and arduous session, had done nothing more than pass this security Bill, Social Security Act, the session would be regarded as historic for all time.

According to the Social Security Administration 2020 Annual Report , the yearly cost of the 85-year old program now officially exceeds its income. The board projects that will be the case…indefinitely.

The latest report also finds that Social Security will empty its trust funds by 2034. The board assures Americans: that doesn’t mean social security dies at that point. Unless Congress does something about it, Social Security will have to live within its means by lowering benefits to about 80 percent of current levels.

TRUMAN: A short time ago an American airplane dropped one bomb on Hiroshima, and destroyed its usefulness to the enemy.

The detonation levels most of the Japanese port city. Seventy thousand people are instantly killed, with tens of thousands dying in the months and years following due to radiation poisoning and burns.

TRUMAN: The Japanese began the war from the air at Pearl Harbor. They have been repaid many fold. And the end is not yet.

Truman was good on that promise. Three days later, U.S. forces dropped a second nuclear bomb, on Nagasaki, killing another 30-to-40,000.

TRUMAN: Let there be no mistake; we shall completely destroy Japan’s power to make war.

TRUMAN: It was to spare the Japanese people from utter destruction…If they do not now accept our terms they may expect a rain of ruin from the air, the like of which has never been seen on this earth.

On August 12th, 1945, after three days of debate, the Japanese emperor declares his intention to surrender—made official at the signing ceremony three weeks later on the deck of the U.S.S Missouri.

CNN NEWSCAST: This morning, horrific video pouring in of a series of catastrophic explosions in a major Chinese port city Wednesday…

A series of explosions rock the Port of Tianjin in China.

The first fireball lights up the night sky at about 11 p.m. Residents in the neighboring apartment complex begin filming the conflagration.

Then a second, much larger explosion: as nearly 800 tons of ammonium nitrate ignite. The blast kills more than 50 people. It levels buildings, shatters windows, and sets hundreds of fires.

The fires burn uncontrollably throughout the weekend, setting off eight additional explosions. One hundred four firefighters die battling the flames.

(AP Photo/Ng Han Guan, File) In this Aug. 13, 2015 file photo, smoke billows from the site of an explosion that reduced a parking lot filled with new cars to charred remains at a warehouse in northeastern China’s Tianjin municipality.