Help for the hurting

WORLD Radio - Help for the hurting 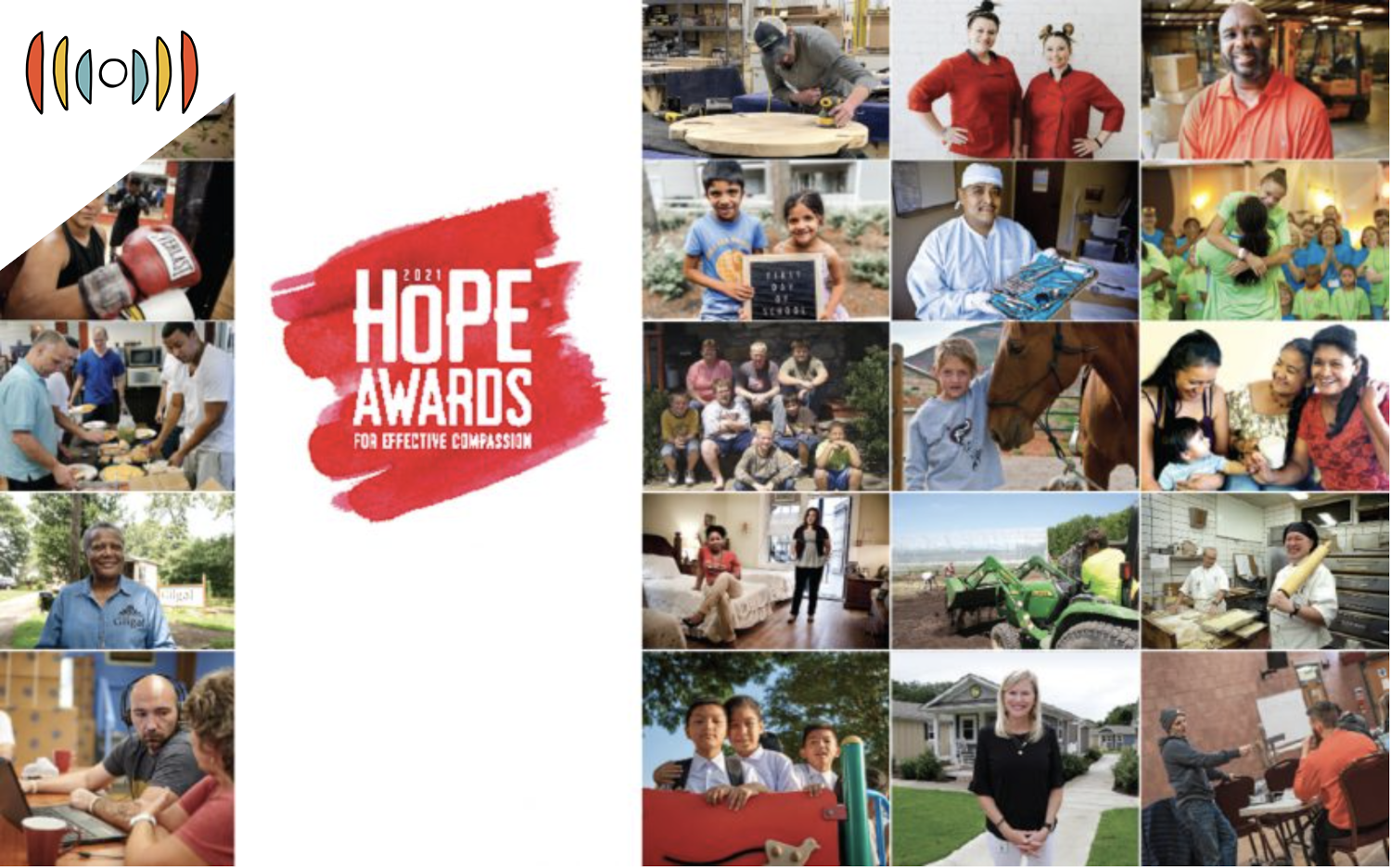 MARY REICHARD, HOST: And I’m Mary Reichard. Coming next on The World and Everything in It: effective compassion.

Every year, WORLD recognizes a handful of non-profit ministries serving on the front lines of poverty fighting. Those ministries are nominated by WORLD readers and listeners. We call it our annual Hope Awards.

EICHER: As it did seemingly everything, Covid forced us to improvise a bit. We narrowed our emphasis this year to just one region: the West Coast. WORLD sent three experienced reporters to visit seven organizations. After spending time on the ground with founders, volunteers, and the people they help, our team narrowed the list down to four finalists. Each will receive at least some prize money. But you get to choose the organization that gets the $10,000 grand prize. Voting is now open at wng.org/compassion.

REICHARD: This weekend you can hear from each ministry in a special Hope Awards episode of The World and Everything in It. But today, the reporters who worked on this project will tell you about the process.

SARAH SCHWEINSBERG: I am Sarah Schweinsberg. And I'm in the Salt Lake City, Utah area.

SOPHIA LEE: I'm Sophia Lee, and I live in the great city of Los Angeles.

BONNIE PRITCHETT: Sarah, you and Sophia have done these road trips before for the Hope Awards and got to travel to a lot of different ministries over the years. And both y'all did.

SARAH SCHWEINSBERG: I'll just say we've done Hope Awards visits before, but never together. So this was kind of a first, I think, for each of us to visit ministries with a partner.

PRITCHETT: How did that play out for you—you guys being able to do your jobs?

SARAH SCHWEINSBERG: I was there to report for radio. And so that's very different than reporting for print. So before going into interviews, we did a lot more coordinating—Hey, I'm gonna need to gather sound of this, or I'd like to see this happen, or how are we going to split up questions. You know, it was nice going into it together as well. Because we do come from very different vantage points, experiences, we noticed different things at certain times. And we could come back together and say, What did you hear? I heard this and compare stories that we're hearing. And it just doubles our efforts. And makes it more efficient and broadens the perspectives we gather.

SOPHIA LEE: Yeah, I mean, our aim is the same, to get good facts and details. But because the medium is different. I'm going to be asking a lot more detailed questions to get specific details that I can put into print. Whereas Sarah, sometimes I would look around, she disappeared. And where did she go? She went to get sound. She's chasing the birds. She's chasing the squirrel and the chicken to get the sound. And I think she actually helped me be more aware of that but also I think the hardest thing for me was keeping silent while working with the podcast people.

SARAH SCHWEINSBERG: Yes. And I loved having Sophia there, because she would ask questions that I didn't think of. And as soon as she asked something, I'm like, oh, why didn't I think of that? So it was really fun to learn from her as a reporter, too.

BONNIE PRITCHETT: Sarah, because you've done this for radio and for magazine as well, what are the three elements that make a ministry an effective ministry and therefore a candidate for the Hope Awards?

SARAH SCHWEINSBERG: Three letters, C-P-S. Those three letters stand for challenging, personal, and spiritual. And they were identified by our editor in chief Marvin Olasky, over years of studying poverty fighting and what leads to effective compassion.

Challenging means the ministry doesn't just do handouts, they're not just giving things away. They're asking something of the people, they're helping in return, whether that's their time, following a program, money in some cases, certain behaviors...offering that human dignity of believing in them to give something in return.

And then there is the personal, which means this is not just broad solutions, blanket solutions. This is very tailored for the culture, the specific situation, the neighborhood, the city. It's very adaptable to the specific problem the ministry is trying to address.

And then spiritual. And we don't just mean, you know, talking about broad, vague spiritual concepts. I mean, very specifically, introducing people to Jesus Christ, discipling them and getting them in the word, really holistically approaching their emotions and spiritual and souls, not just their physical circumstances. So that's what we're looking for when we go into the ministries.

BONNIE PRITCHETT: Well, so between the three of us, we went to seven different ministries. Sophia, you're the only one who got to go to all seven, can you kind of give a big picture of what those ministries were and the communities that they were seeking to help?

SOPHIA LEE: One thing I really loved about all these nonprofits that we visited, was that it really started with someone completely ordinary. An ordinary person saw a need in the community, because they live in that community. And they just decided to do something about it. And they started small and then God kept opening doors and things grew out of them seeing a need, and meeting that while living amongst them. And, and I think that was that, that was really striking to me.

BONNIE PRITCHETT: They're just doing what God called them to do right there in that neighborhood and that little community. And it may not seem like it's having an impact on the big stuff that gets on the nightly news. But they keep going because that's what they're called to do. And they're supported by their communities. And they're helping people change their lives. And that's, I mean, just, it's just really encouraging.

SARAH SCHWEINSBERG: I would just add one more thing. What struck me also is that these ministries just throw out the love of God, to anyone who's willing. And when people aren't ready to get help, they're not ready to comply with the program or stick around, they're okay with that, they can leave. But they don't worry about who deserves help or who doesn't. It's just: “you’re human. We love you because Jesus loves you, we're here to help.” So I learned a lot from that people are not projects, they're there to love, and God will take care of the rest.

SOPHIA LEE: Yeah, one thing that was convicting personally for me, is, I think, going to these places reminded me again, that these are human beings made in the image of God.

What I really appreciate it is that these Christian nonprofits go even deeper, they address not just the individual's physical and mental and emotional needs, but the spiritual needs. And that's something that's very lacking and in, in secular nonprofits, that ultimately, it's also a spiritual issue—don't forget that people have a soul too. You can change the behaviors, you can change that person's conditions and income level by this at the end of the day, you also have to change that person's entire being, and by going through death and resurrection in Christ.

BONNIE: So just I guess, what are some closing ideas that y'all have? Or what stuck in your mind about this trip?

SARAH SCHWEINSBERG: Well, I just wanted to play a clip. This is from JoLynn DiGrazia. She is the founder and director of Westside Ministries in Turlock, California.

DIGRAZIA: The biggest challenge is keeping the decision to stay and not leave...I think it's really important that no matter what, we stay here, and we continue to do what God's called us to do, regardless of what happens....So that's what we just try to do is just not ever, ever, ever give up.

These men and women who serve in these communities, they are not going anywhere they stick with it. And that struck me as a young millennial weekend warrior who loves to get around and have independence, just what we're missing out on when we don't go deep in our churches and our communities, getting involved in ministry, building relationships. So I walked away from visiting these ministries just realizing I want more of that in my own life.

And then I went on this trip. And what I saw was so humbling, and so convicting. And it basically flushed my cynicism away. And what I saw was ordinary, average Christians, who love Jesus, and who are who are doing the act of loving others, daily in their lives, without any accolades without media attention...Christians being salt and light in this world, Christian changing lives one at a time, one person at a time, one community at a time. And people being transformed by the love of Christ, and by the love of Christians.

I needed to hear that. I needed to see that. Because to be completely honest, I think I was becoming self-righteous, angry, and being on this trip really helped me recover my love for the body of Christ. And it was a moment of just deep humility that God brought me to. So it gave me hope. And ironically, we were doing the Hope Awards, and I needed that hope. You know, that full vision and hope of what the gospel can do.

To learn more about each of the Hope Awards finalists, visit wng.org. And be sure to listen this weekend for our special episode highlighting each organization.