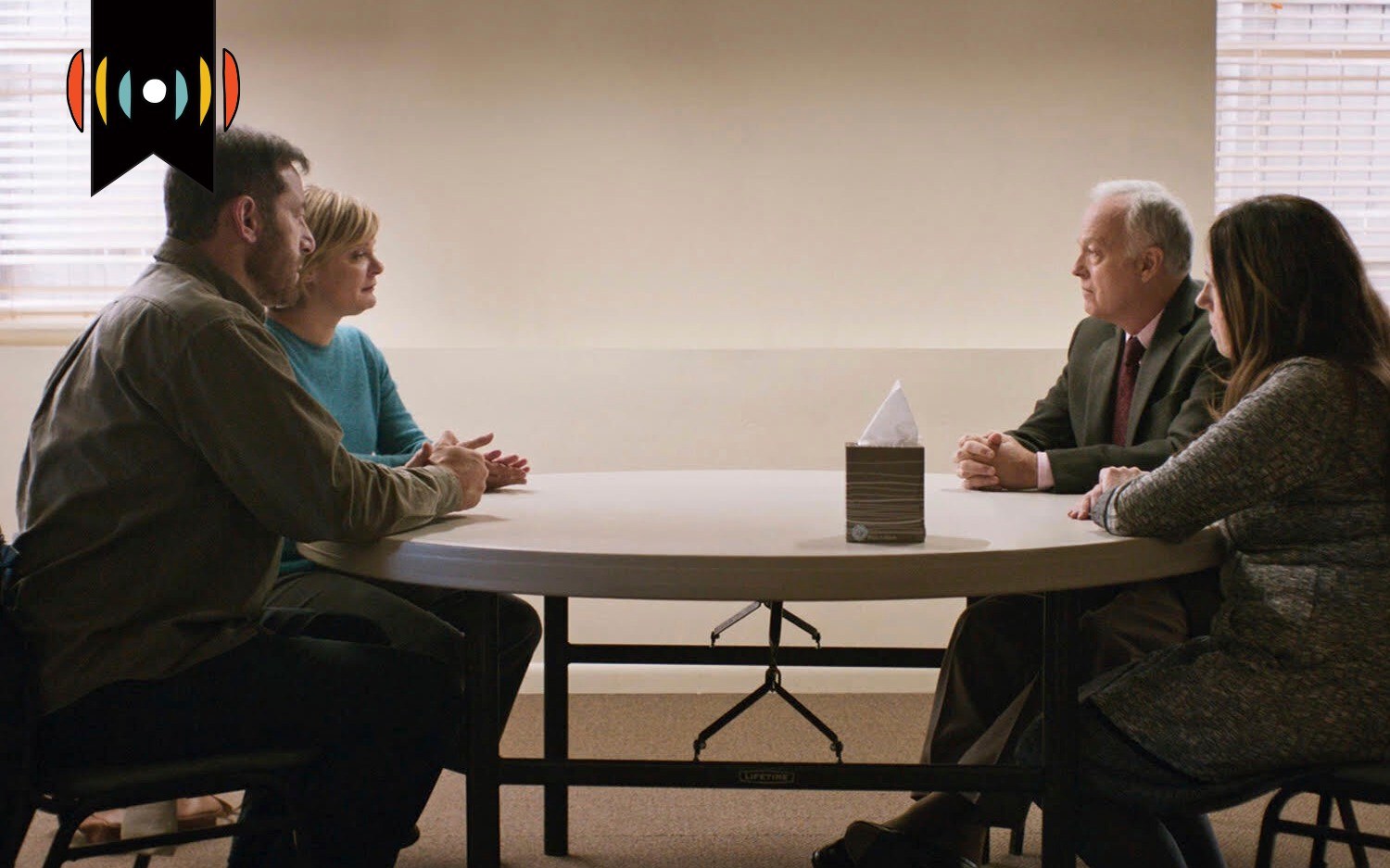 MYRNA BROWN, HOST: Today is Friday, October 15th. Thank you for turning to WORLD Radio to help start your day.

PAUL BUTLER, HOST: And I’m Paul Butler. Coming next on The World and Everything in It: a parent’s worst nightmare.

It’s hard to imagine losing a child. Harder still to imagine sitting across the table from the parents of the person responsible. A new movie coming to theaters today plunges audiences into that painful reality, but it offers hope in the midst of darkness. Here’s reviewer Sharon Dierberger.

SHARON DIERBERGER, REVIEWER: Mass takes place in a small-town Episcopal church. And the heart of the action, if you can call it that, happens in the church’s sparse basement meeting room. Children’s colorful tissue paper artwork covers a window. A crucifix hangs on an otherwise blank wall. Piano melodies drift down from the sanctuary above. And church workers are preparing the room for visitors:

Church worker 1: How many people are coming?”

Mediator: “Richard, Linda, this is Jay and Gail Perry.”

Jay: “Thank you for agreeing to meet us.”

Mediator: “I’m going to leave you alone. Let me know if you need anything.”

The four sit awkwardly around the table. Tension builds. We begin to wonder what this meeting is really about, sensing a past tragedy. Finally, 35 minutes after the film’s purposeful—but agonizingly slow start—we learn what’s thrust these couples together. The film’s trailer includes this scene so it’s no spoiler:

Gail: “Tell me about your son.”

Gail: “Everything. I want to know everything.”

Gail: “Why do I want to know about your son? Because he killed mine.”

Six years earlier, Richard and Linda’s son inexplicably went on a mass shooting spree at school. Among others, he killed Gail and Jay’s son. A mediator has arranged the meeting for the four to talk by themselves. They’re all still struggling to make sense of what happened.

The dynamics between the parents are excruciating and believable. They address topics most of us would prefer to avoid, and yet probably think about whenever a school shooting happens. The conversation fluctuates between accusations, defensiveness, explanations, memories, disbelief, and questions. Here they are, wrestling to understand why one son went off the rails:

Richard: “None of that is psychopathy. You don’t know what you’re talking about.”

Jay: “If you take the medical records with the criminal report, which now finally we have the full report, don’t you have to weigh the evidence, the facts of what he did, with your personal relationship history with him?”

Camera angles mostly zero in on troubled, expressive faces. And the narrative doesn’t get any help from flashbacks. The entire story emerges through powerful dialogue, with no orchestral score playing behind.

Each character emotes differently. Gail says the least, but hits the essence of every point quickly—and gradually, her hard attitude softens in one of the film’s most poignant moments.

Her husband, Jay, keeps reminding her they aren’t there to interrogate or be vindictive—but he’s the one whose self-control cracks. Richard heaps guilt on himself for his son’s actions. And Linda, an introspective, hurting, and obviously loving mother, agonizes over how her sweet baby boy grew to be a murderer.

Here they are still grappling for answers:

Linda: “We’re not denying what he did or who he became.”

Jay: “I can’t help but hear you blame a not abnormal child.”

Richard: “He was my son. I can’t remove my feelings from our history or his records.”

Jay: “I’m not asking you to. I’m saying what he did, his capacity for murder was probably potentially there a long time before anyone could have known.”

Richard: "You think you can attach one word to something in order to understand it. To make you feel safe. Well, I won’t say it. I don’t believe it. It’s not simple. It’s everything you cannot see.”

Mass is not a happy family movie you’d naturally gravitate to. It’s difficult to watch. And it includes brief swearing, hence the PG-13 rating. It’s intense, but it’s not dark. Script-writer Fran Kranz, in his directorial debut, creates a realistic, sensitive portrayal of suffering. Top-notch, nuanced acting compels the audience to vicariously live the parents’ grief.

Despite no tidy ending, the film includes several surprising turns that show the meeting was worth it. One even suggests the possibility that several of the wounded parents may turn to the Source of true hope and healing.