Going back to the moon

WORLD Radio - Going back to the moon

NASA’s Space Launch System (SLS) rocket with the Orion spacecraft aboard is seen atop the mobile launcher as it is rolled up the ramp at Launch Pad 39B, Wednesday, Aug. 17, 2022, at NASA’s Kennedy Space Center in Florida Photo/NASA 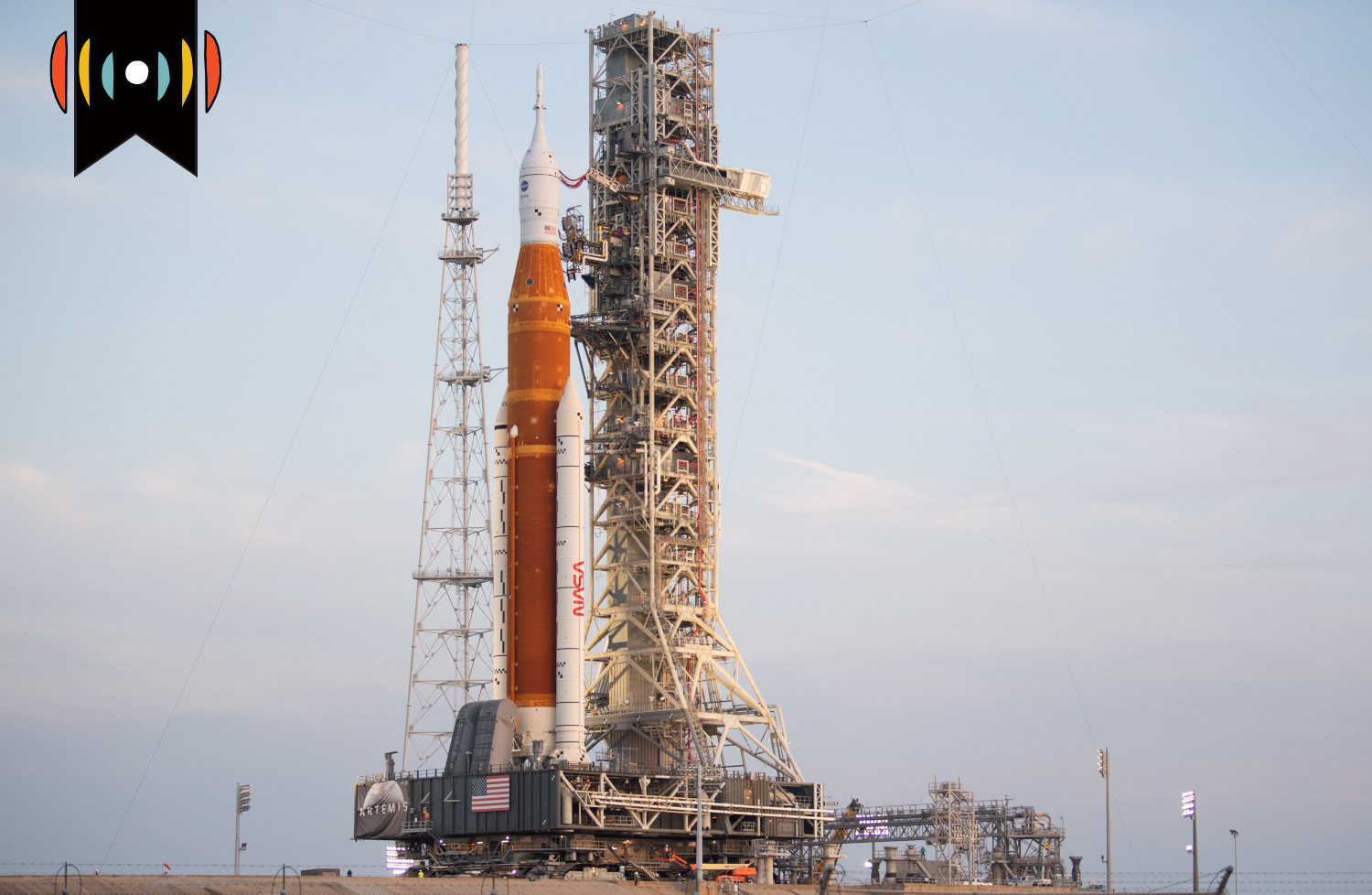 MYRNA BROWN, HOST: Today is Thursday, August 18th. Thank you for turning to WORLD Radio to help start your day.

PAUL BUTLER, HOST: And I’m Paul Butler. Coming next on The World and Everything in It: heading back to the moon.

Yesterday, at the Kennedy Space Center, NASA rolled out the most powerful rocket it’s ever built: The Space Launch System. It’s the first step in NASA’s quest to put humans back on the moon. And beyond that, a larger goal: Mars.

BROWN: The rocket launch is set for August 29th. The mission is called Artemis I. WORLD reporter Bonnie Pritchett spoke with some of the people behind the project…and brings our story.

REPORTER, BONNIE PRITCHETT: Earlier this month, journalists from all over the world swarmed the Johnson Space Center in Houston, Texas. They hailed from Poland, Australia, Germany. For many of them, this was a field trip and they had been cut loose in Outer Space Wonderland. 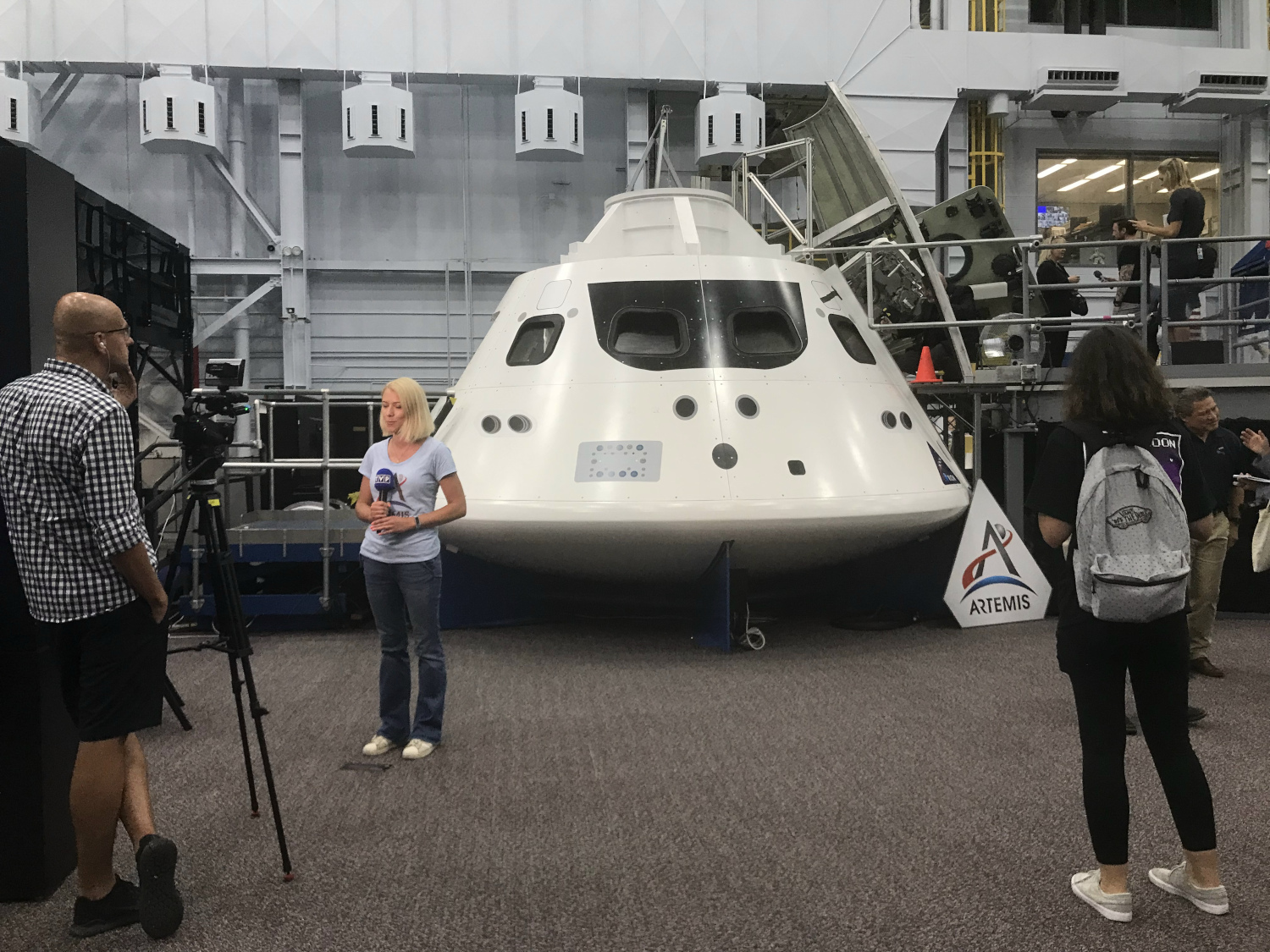 GUIDE: So, you’re going to get to see everything but go ahead and pick a station...

The three-story hangar is filled with full-scale mockups of spacecraft. Vehicles like the Space Shuttle cockpit, Russian Soyuz modules, and Boeing’s Starliner. The crowning jewel on this tour? The Orion Spacecraft.

It’s different from the Apollo capsule with its tin-can gray inverted cone. Orion is bigger. And shiny white. Like Apollo, Orion will one day fly humans to the moon and eventually to Mars. But this maiden voyage will be an unmanned 42-day journey around the moon.

MOSIE: And I was actually working in the building with the astronauts when I was here doing 1969. Yeah…

The women and men at various NASA facilities eagerly showcased their role in the Artemis mission. For some, like Andrea Mosie, the thrill never gets old.

MOSIE: I've been working here for 47 years. I was actually here in 1969 for the Apollo missions because I was a student working here before I went to college… 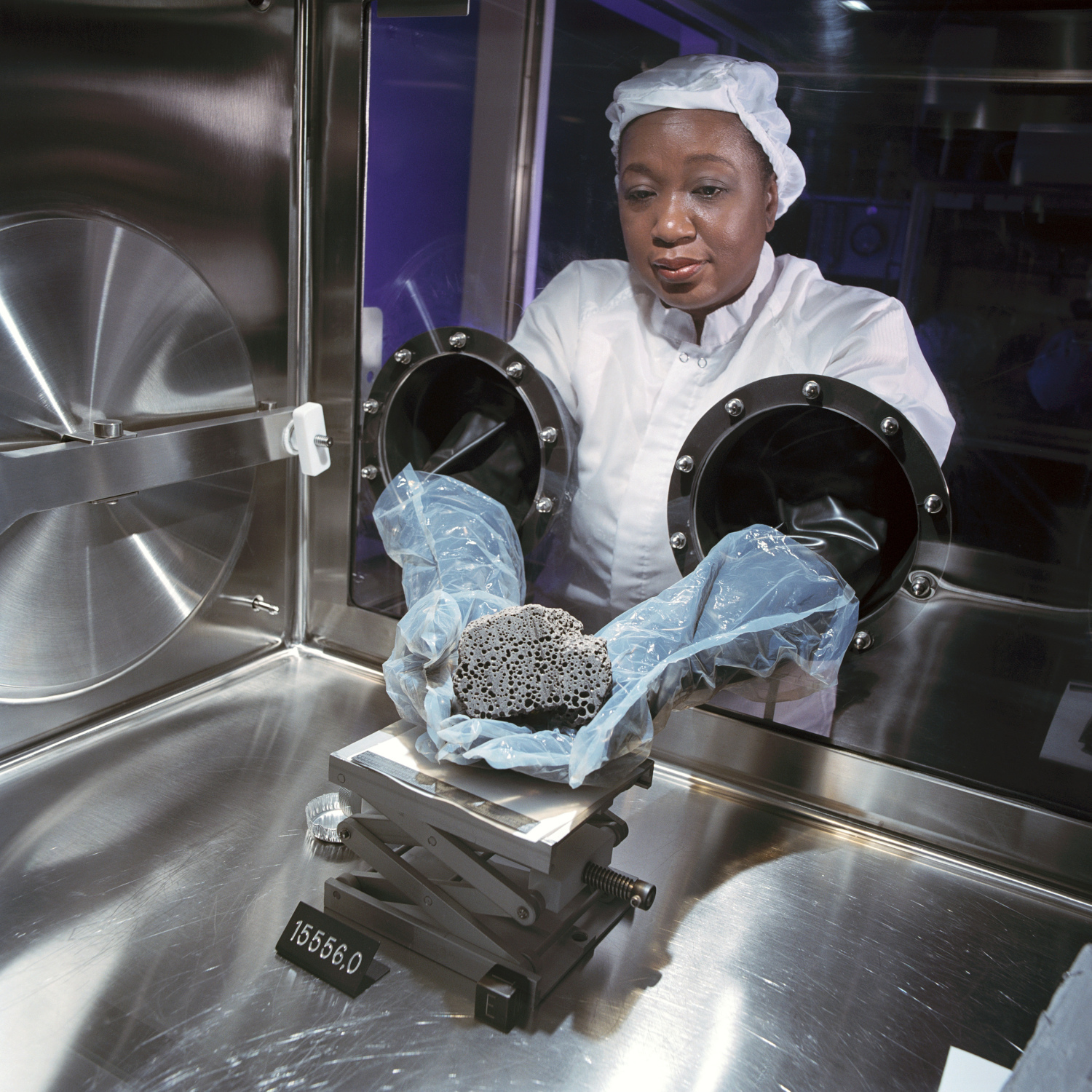 Mosie works with NASA’s Astromaterials Acquisition and Curation Office. She showed off samples of moon rocks.

MOSIE: But we work in a lab with these moon rocks. And actually, we break them, chip them, even band-saw them and send them out to the principal investigators who actually do the research study…

Back in the Apollo days, Mosie worked in lunar missions.

MOSIE: It was a lot of excitement with so much excitement around the entire Johnson Space Center at that time. I mean, just every morning I would go into my boss's office. And before he got here and I would look out the window because the astronauts would park in their parking lot. And one mission, I think it was Apollo 12. One had a red Corvette, one had a white Corvette, one had a blue Corvette. So, in the morning, they will come in all together, red, white, blue, or blue, red, white, or whatever…

NASA said it was just promotional. Mosie thought it was exciting.

MOSIE: And that kind of excitement is here now with the Artemis program. Everybody's excited about returning to the moon and to Mars…

Across the room from Mosie is the Orion capsule mockup. Astronauts will use it to train for Artemis missions.

That’s Ronny Baccus. His area of expertise is Orion’s heat shields. Those shields will protect craft and crew from extreme temperatures when reentering Earth’s atmosphere. 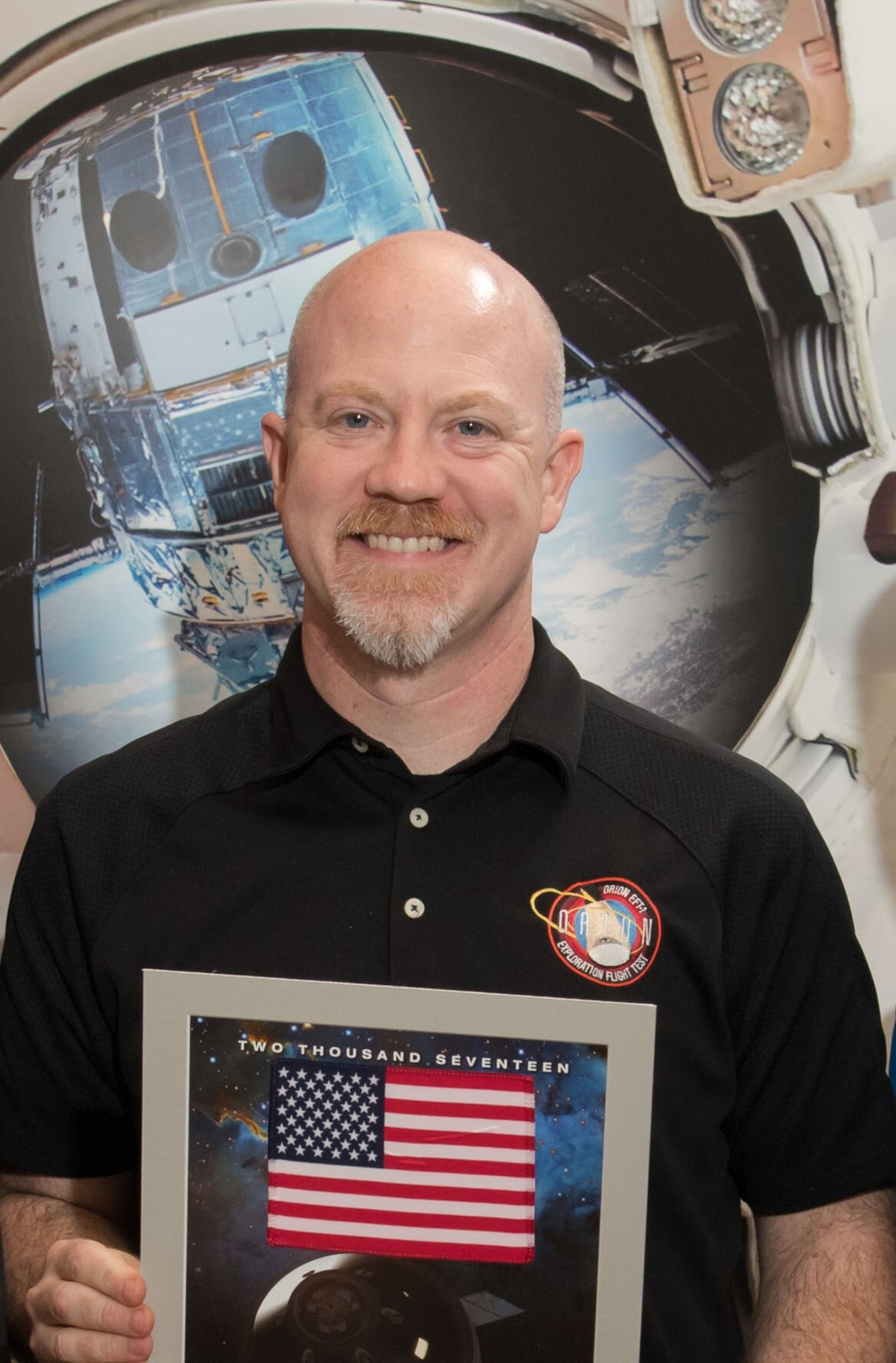 But they’ve only been tested on Earth.

The unmanned Artemis 1 mission scheduled for next week will test the shields in actual flight conditions.

BACCUS: But there’s certain combinations of heating and aerodynamic pressure, all working together that you just cannot duplicate with the ground test…

A primary objective of the Artemis I mission is a performance check of all of its systems.

BACCUS: So that we’re certifying the system to be safe for putting humans on board for Artemis II.

Simulations can’t predict every potential anomaly. On February 1st, 2003, the shuttle Columbia broke apart upon reentry. Damaged heat shields could not protect the vehicle or its crew. Baccus worked on the forensic investigation.

BACCUS: Yeah, so I do think of that, about that a lot. It's sobering. And it's a reminder of the importance of the job of being diligent as engineers and being open with concerns….

Though sobering, Baccus said the Columbia investigation led to greater accountability within NASA and, ultimately, the continuation of the shuttle program.

Once that program ended, NASA returned its gaze to the moon and beyond to Mars.

Fifty-two astronauts are vying for crew positions on the next Artemis missions. One of them is Victor Glover. 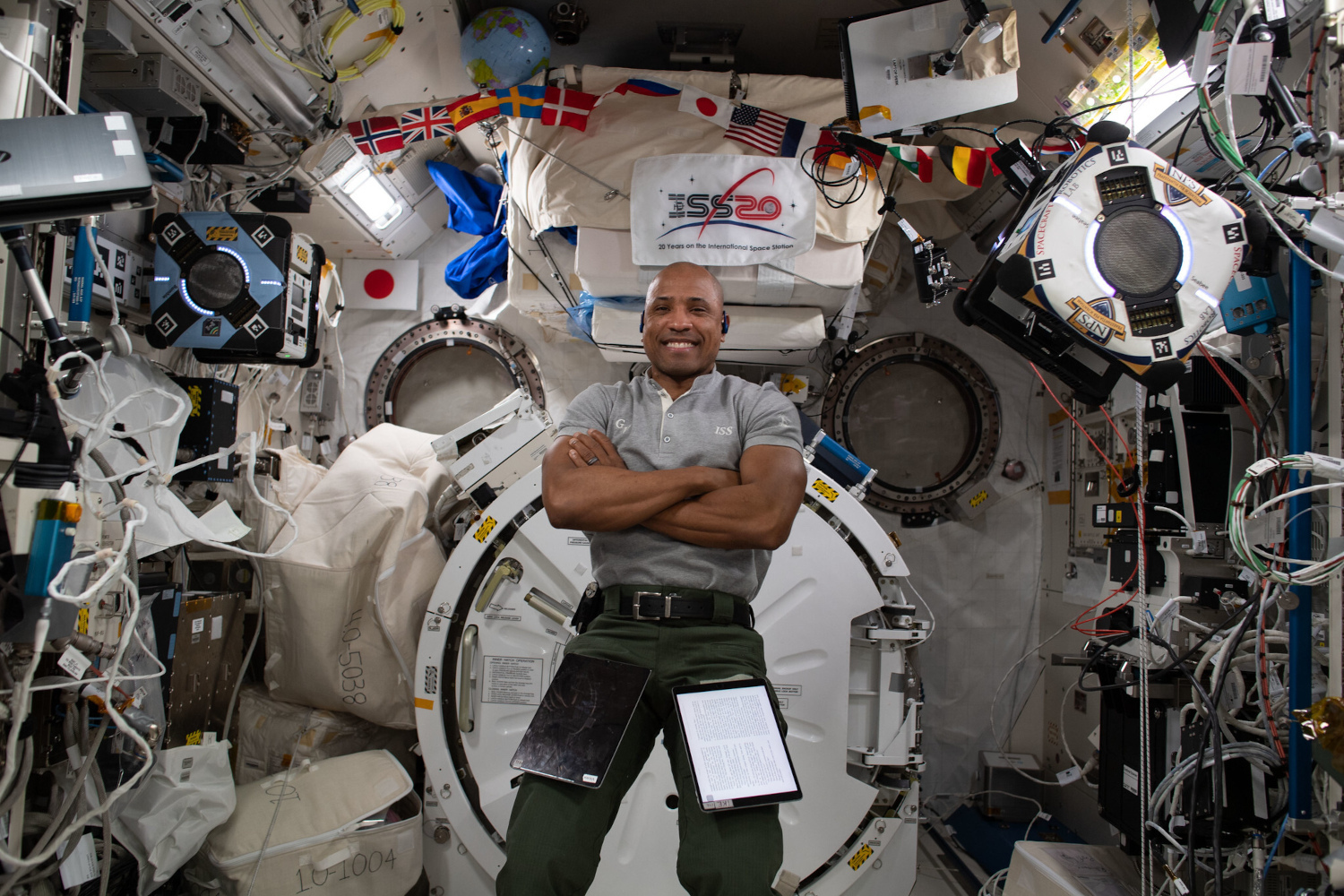 He understands the dangers inherent in human space exploration, as does his family.

GLOVER: And so, when I got assigned to my mission to the space station, I told my family, NASA is going to get me ready in the next two years to go to space. But it's my job to get you ready. And here's the thing is, there's not really a roadmap for that. And so we had to do it together. And it involves a lot of talking, a lot of listening, and a lot of praying together…

That preparation, with support from NASA, sustained him and his family during his six-month stay aboard the space station.

If selected for an Artemis crew, Glover is confident his family will be ready. And he’s also confident that Artemis I is ready for launch.

GLOVER: We talked about Artemis one, but Artemis one is a stack of hardware and our mission and an idea, but it takes people to make those things happen. And I'm really looking forward to being out there and looking them in the eye and saying well done and celebrating with them. The mission is great, but I'm looking to celebrate with the team that made that mission possible.