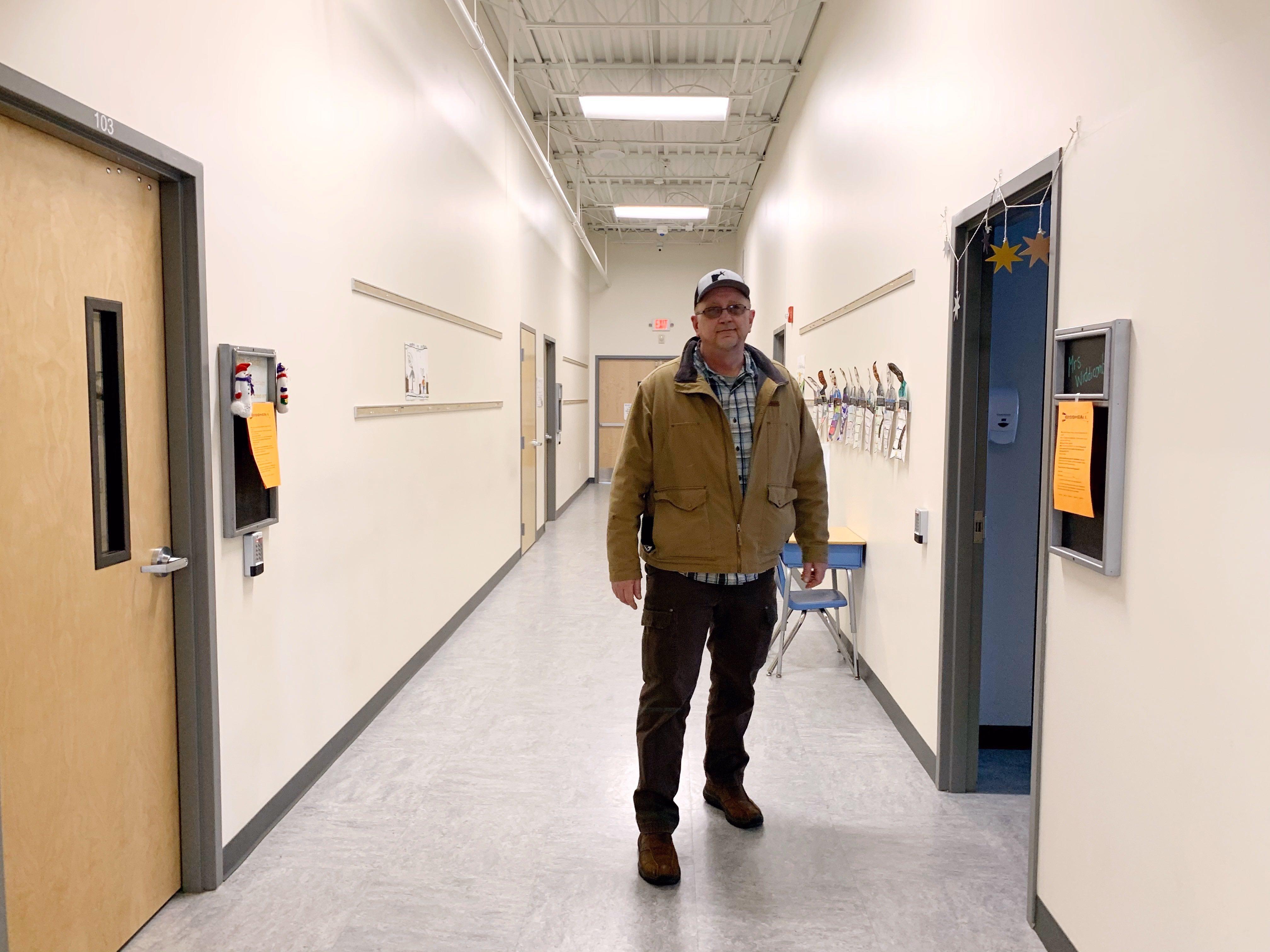 MEGAN BASHAM, HOST: And I’m Megan Basham. Coming next on The World and Everything in It: a mystery artist.

Some of you may be familiar with the 1997 drama Good Will Hunting. In the movie, a professor writes extremely difficult math problems on chalkboards in the halls. Overnight the problems are solved, but nobody knows who the mystery mathematician is.

EICHER: Well a Christian school in Minnesota had its own kind of Good Will Hunting story, but for this school, it involved Yoda, a ship, and a deer. Here to unveil the mystery is WORLD Radio’s Sarah Schweinsberg.

SARAH SCHWEINSBERG, REPORTER: It’s the end of the school day at Christian Heritage Academy. Before some students can head home, they walk up the hall emptying trash cans and pushing paper into recycling pins

KOSKI: All of our classrooms are down the wing here.

KOSKI: I noticed some artwork in my classroom and I thought, um, you know, like what is this?

One morning, Koski entered his classroom to discover a detailed sketch had appeared on his whiteboard overnight. It was a ship with wooden masts and sails. All of his students denied doing it.

KOSKI: I was confused because normally I didn’t think anybody had been in there or anything.

Soon drawings began showing up in every classroom. Pictures of Yoda or a deer in a forest. But for weeks, the teachers couldn’t figure out where they were coming from.

KOSKI: As soon as we would erase one, the next day there would always be a new one that would appear…

The head principal, however, had a suspicion. Who else could have access to the classrooms during off hours besides teachers?

PETERSON: And then I got called down to the principal’s office, my boss, and she goes, We have a mystery. Are you drawing on the whiteboard? And I go ohh I’m sorry I forgot to erase them.

Before coming to work at Christian Heritage, Peterson had spent his career in facility maintenance.

PETERSON: Just fixing things, whatever, uh, from electrical, plumbing, whatever it was to just helping other people out, uh, in their times of need.

Then, three years ago, his life changed dramatically. While Peterson drove down the interstate in a snowstorm, another car hit him.

PETERSON: All of a sudden I just heard metal crunching and white flashes and the car spinning. Then I hit my head on the beam between the two doors.

At first, it seemed Peterson had escaped the accident unscathed. Initial X-rays and a CT scan came back clear. But then, two weeks later, he developed debilitating migraines.

PETERSON: I couldn’t watch TV, turn the computer on. It was just too, too much.

PETERSON: The floor is moving all the time too, like lava.

PETERSON: The first year uncontrollable laughing or crying episodes for like 15, 20 minutes.

As he improved, his wife suggested that he take the part-time janitor job at Christian Heritage. While he mopped and vacuumed classrooms, there was one thing Myron Peterson missed about therapy: drawing.

Before his accident Peterson had never attempted to draw anything. And now, to his surprise, he was actually good at it. He started doing watercolors and spending hours in his art studio at home.

So while he cleaned at Christian Heritage, he paused to draw on the white boards.

PETERSON: For migraines and anxiety, it’s just, it was, it’s nice to focus on the artwork, and that’s it.

Another side effect of Peterson’s brain injury is short term memory loss.

So he forgot to erase the ship and then a few more drawings. But far from being in trouble, the principal and teachers asked for more.

AUDIO: [Myron talking as he walks down the hallway]

As Myron Peterson walks down the now-empty school hallway, he remembers some of his favorite whiteboard drawings.

PETERSON: So this room, she is the English teacher. They were studying Shakespeare. So I put up a portrait of Shakespeare up there on the board. Barb, the math teacher, she likes dogs. So I drew some dog or puppy pictures on her board. Most of the girls in there like puppies.

Andrea Hopkins just locked up her first grade classroom. As she passes by, she recalls how Peterson would draw things from their conversations on her board.

HOPKINS: All of a sudden I would come in and see something that we had talked about… maybe a bird or some kind of flowers because we both enjoy gardening.

Myron Peterson says besides calming his anxiety, his whiteboard art helped him pray for the school.

PETERSON: After the accident, prayer got knocked out of me. Before I do any of the projects, you know, pray for God’s will and, and then I pray for whoever I’m doing it for.

But just as soon as Peterson had adjusted to life with a brain injury… his symptoms worsened. His vision began to narrow and blur.

At the end of last school year, he had to quit the janitor job. He now spends most of his time quietly at home… drawing.

PETERSON: It hasn’t changed a lot except I was trying to work on doing faces and more detailed work and that’s kinda gone, and I just had to accept it.

Peterson says even though he may lose his sight and his ability to draw, He trusts that God will have another gift for him. Right now it’s drawing and someday, if he has to, he’ll find something else.

PETERSON: There’s hope. Don’t, don’t give up. Um, it’s not just about the drawings about, it’s about the whole thing, about life. Something happens in your life, you know, stub your toe, you know, you get used to it. Um, just keep going, trudging on. God has something else in plan.