Gasping for breath: Is earth running out of oxygen?

WORLD Radio - Gasping for breath: Is earth running out of oxygen? 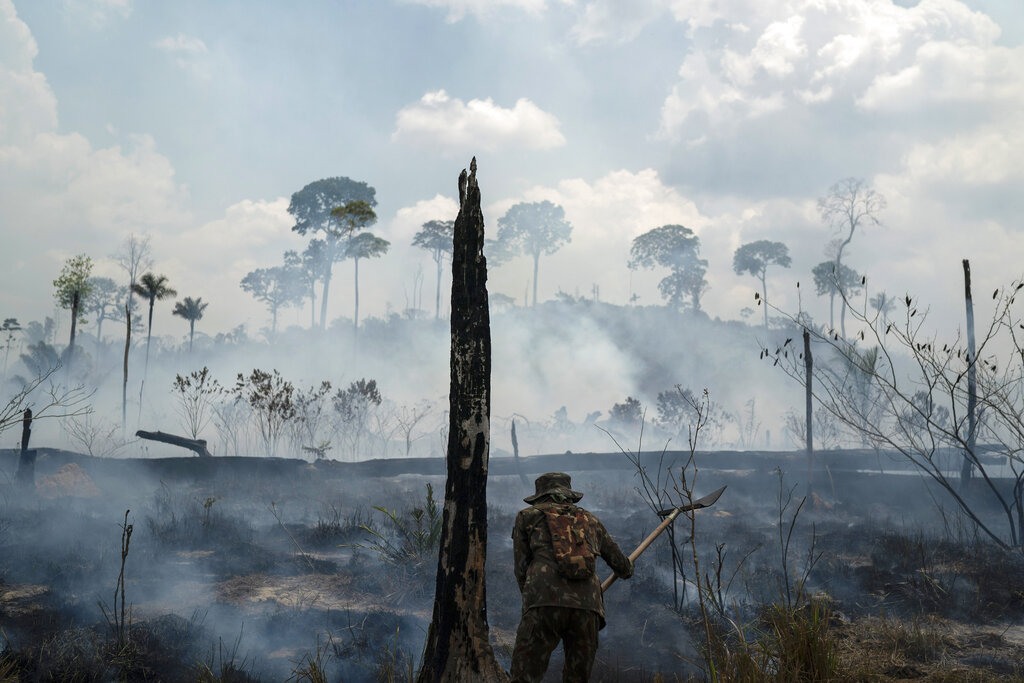 MARY REICHARD, HOST: It’s Thursday, the 12th of September, 2019. Thanks for joining us today for The World and Everything in It. Good morning, I’m Mary Reichard.

Last month, the world went a little crazy over fires burning in the Amazon. This is nothing new or surprising, given the time of year. We can say the number of fires did increase pretty dramatically versus a year ago. That’s what prompted the panic.

REICHARD: Ecologists warned about irreversible damage to the Amazon’s biodiversity. Climate scientists warned all that combustion would generate dangerous amounts of carbon dioxide. And activists insisted if too many trees disappeared, we might soon find ourselves gasping for air.

LEIGH JONES, REPORTER: Many early news reports about the fires in the Amazon repeated an eye-popping statistic.

CNN: Often called the lungs of the earth, the rainforest provides 20 percent of the world’s oxygen.

That account from CNN was just one of many. And that statistic got repeated by climate change activists, celebrities—and even the president of France. But unfortunately … it’s not true.

Hugh Ross is the founder of Reasons to Believe. It’s an organization that seeks to integrate science and faith. He says that calculation of the Amazon’s oxygen production only adds up if you leave out part of the formula.

Photosynthetic life is a fancy way of saying plants. Plants take in carbon dioxide and produce oxygen. The bigger the plants the more oxygen they produce. And as the world’s largest rainforest, the Amazon contributes a fair amount of oxygen to earth’s atmosphere.

But it’s not the biggest contributor.

ROSS: The biggest contributor would be the phytoplankton in the oceans of the world. They contribute about 70 percent of the oxygen from photosynthesis.

And that’s not the only source of earth’s oxygen. We actually have a surplus.

ROSS: Oxygen after all makes up 21 percent of the earth’s atmosphere, knocking it down by a few tenths of a percent isn’t going to make much difference.

So how did we get all that excess oxygen? Secular scientists don’t really know.

Tim Clarey is a geologist with the Institute for Creation Research.

CLAREY: There is a big issue with where did the oxygen come from. And you know, there’s geologists working on that. And they try to find, you know, evidence to show when oxygen first appeared on earth. But it’s still a big mystery.

Clarey says most secular scientists believe we owe our extra oxygen to early forms of algae. As they evolved, they began to photosynthesize and deposit the first molecules of oxygen into the atmosphere. But those scientists can’t explain how those small deposits suddenly became a vast reserve.

CLAREY: And there was an oxidation event that took place that allowed animals, you know, like we know from the Cambrian explosion on up to kind of explode. And all those forms of life just kind of magically appeared in their story.

CLAREY: So we believe there was always oxygen. God created a certain amount of oxygen. It didn’t have to just come from that, but it sustains itself in the system that God designed, of course, by the ocean. There’s so much ocean algae, and it is producing most of the oxygen, so that you know, the Amazon isn’t as critical as it is sometimes made out to be.

Hugh Ross with Reasons to Believe says all the fear over losing trees in the Amazon is misplaced. We should be more worried about what happens to them after they’re cut down.

ROSS: And actually, if they were to lumber the Amazon jungle in an appropriate way, it would actually increase the oxygen flow from that jungle, decrease the carbon dioxide. Why? Because when you cut down old trees and replace them with the younger trees, the younger trees grow faster. And when you cut down the old trees and use it for lumber that basically stores carbon.

Ranchers in Brazil are clearcutting the Amazon to create pastures for their beef cattle. But Ross says they could make more money and improve the environment if they switched to logging. And that’s just one example of a solution to climate change that also produces economic benefits.

Ross says Christians need to realize that those win-win scenarios are actually part of God’s plan.

ROSS: God has designed our planet in such a way that when we face a crisis in managing the planet for our benefit and the benefit of all life, in advance God has provided us with solutions that are optimally ethical and optimally economic.

And Tim Clarey says we should always keep in mind the rest of the story.

So next time news of an environmental apocalypse spreads like wildfire—just take a deep breath. And remember, those dire statistics probably don’t tell the whole story.

The Christian Broadcasting Network (CBN) ran a similar piece a few weeks ago, but gave a broader interview platform for Dr. Hugh Ross. In that story, Dr. Ross still noted that we should be worried about the loss of the Amazon forests, in the interest of slowing the rate of global climate change. If the fires in the Amazon are not adequately controlled, it may become very difficult for the Amazon ecosystem to fully recover. So while claims that the Amazon forests are the &#8220;lungs of the earth&#8221; can be overinflated, this is still an ecological crisis that requires urgent attention:
https://www1.cbn.com/cbnnews/world/2019/august/scientist-to-news-we-should-be-worried-about-the-amazon-prime-system-for-removing-greenhouse-gases
WORLD News Group might learn a lesson or two from CBN on producing a more balanced news piece.