President Joe Biden holds up a mask as he announces from the East Room of the White House in Washington, Thursday, July 29, 2021, that millions of federal workers must show proof they've received a coronavirus vaccine or submit to regular testing and stringent social distancing, masking and travel restrictions in an order to combat the spread of the coronavirus Susan Walsh/Associated Press Photo 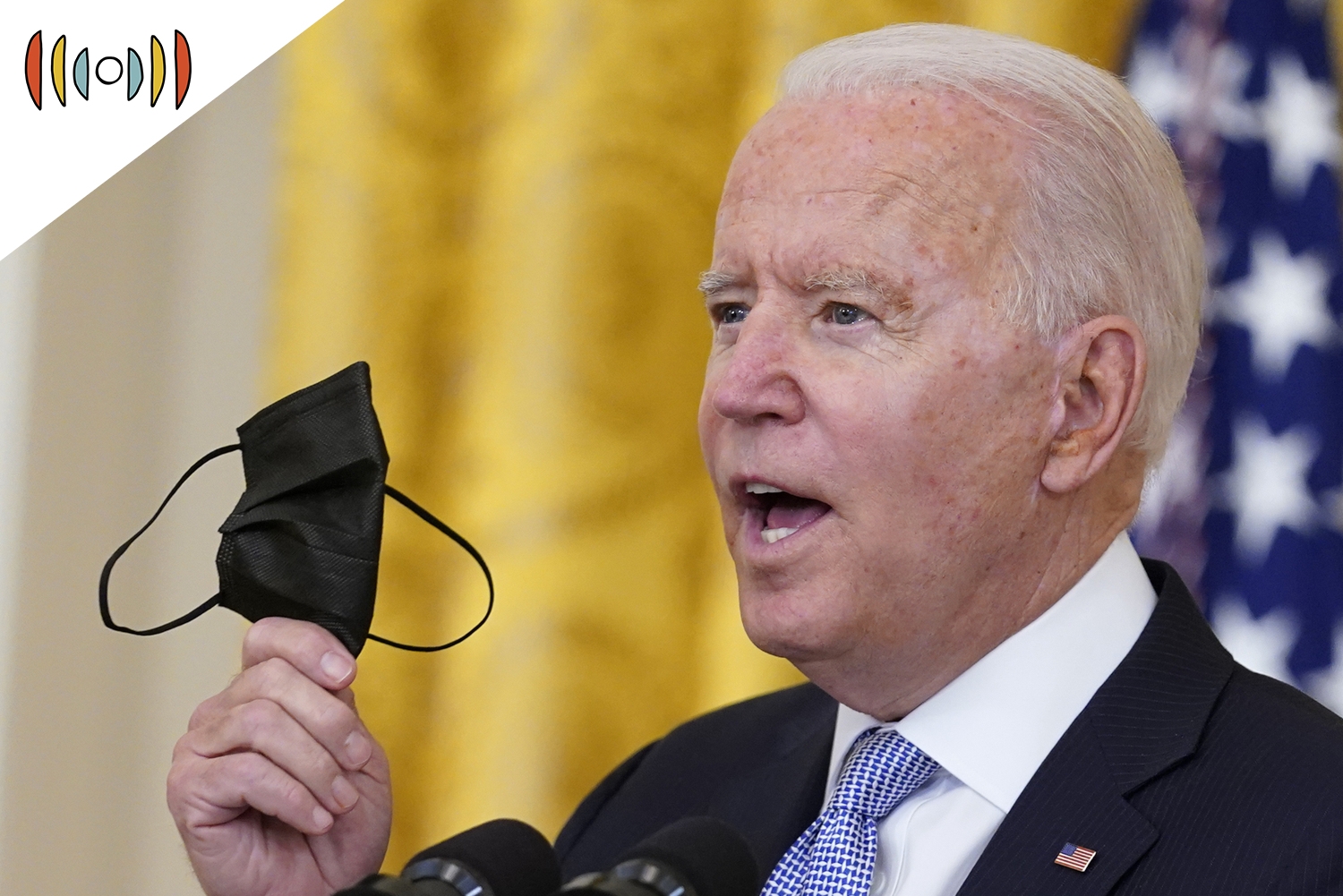 He urged employees to get vaccinated, but is not mandating vaccinations. He said anyone who chooses not to get the shots…

BIDEN: Will be required to mask no matter where they work, test one or two times per week to see if they have acquired COVID, socially distance and generally will not be allowed to travel for work.

He decried what he called an “American tragedy” of preventable deaths. The CDC recently said that 99.5 percent of those who have died of COVID-19 in the last few months were unvaccinated.

Biden also ordered the Pentagon to look into adding the COVID-19 shot to its list of required vaccinations for military service members. And he has directed his team to take steps to apply similar requirements to all federal contractors.

KRISTEN FLAVIN, REPORTER: The Biden administration says it will not attempt to extend the expiring moratorium beyond July 31st.

The CDC enacted the eviction freeze in September, citing the importance of social distancing during the pandemic. It reasoned that many evicted renters would be forced to move in with others or turn to shelters. But multiple federal courts ruled the CDC overstepped its authority.

The White House said Thursday that President Biden would like to extend the federal eviction moratorium due to the spread of the delta variant. But the administration says its hands are tied after a recent Supreme Court ruling.

In a split 5-to-4 decision last month, the high court allowed the eviction ban to continue through the end of July. But the court signaled it would block any additional extensions without an act of Congress.

That is a CDC public health order that allows the government to quickly expel immigrants who enter the country illegally in order to slow the spread of the virus.

With the delta variant running rampant, the administration has reportedly decided to “put the brakes” on plans to roll back Title 42.

MCCONNELL: We’ve now seen the highest unaccompanied child arrivals on record, the biggest month for immigrant encounters in 21 years, and this month, total CBP apprehensions for the calendar year are expected to top a million.

GOP lawmakers continue to blast President Biden for reversing Trump-era policies they say were working well to stem traffic on the border.

The Biden administration says it’s focusing on root causes in the home countries of migrants.

U.S. gross domestic product growth slower than expected » The U.S. economy is bouncing back, but maybe not as quickly as expected.

A new report shows U.S. gross domestic product grew at a 6.5 percent annual rate in the second quarter this year. That was a little better than the first quarter, but significantly slower than expected.

POWELL: Factors related to the pandemic such as caregiving needs, ongoing fears of the virus and unemployment insurance payments appear to be weighing on employment growth.

Those unemployment insurance payments are now the subject of numerous legal battles. Many states are ending their participation in the so-called enhanced unemployment program, which gives recipients an extra $300 weekly federal check on top of state benefits.

But some people are suing to keep the checks coming. And Judges in Maryland and Indiana have ruled that the states must resume the extra payments for now.

ROKITA: This is another example of a judge taking the law into his own hands and a system that really is keeping people from getting back to work and dignity that they had - or should have - with work.

The enhanced unemployment benefits are slated to end nationwide in September.

LEIGH JONES, REPORTER: Pope Francis defrocked the 91-year-old McCarrick in 2019 after substantiated claims that he abused teenagers and seminarians.

McCarrick is now the first U.S. cardinal to face criminal charges for alleged sexual abuse. Prosecutors say he assaulted a boy at a wedding reception in 1974.

He faces three counts of indecent battery and assault. His alleged victim was 16 years old at the time, attending his brother’s wedding in Massachusetts.