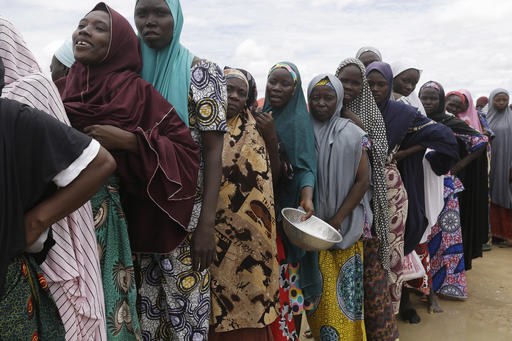 MYRNA BROWN, HOST: Coming up next on The World and Everything in It: food aid and persecution.

On Tuesday we told you about the looming food crisis in developing nations. The world has enough food, just not in the right places. And pandemic-related restrictions have made it much harder to move food to where it’s needed most.

MEGAN BASHAM, HOST: That makes food an even more valuable commodity—one that can be used as a weapon instead of a blessing. According to a recent report from religious liberty watchdog Open Doors USA, officials in some parts of the world are withholding aid from Christians unless they are willing to renounce their faith.

Joining us now to talk about this new method of persecution is Open Doors CEO David Curry. Good morning, David!

DAVID CURRY, GUEST: Thank you for having me on. I appreciate it.

BASHAM: So, you note that this problem is especially bad in sub-Saharan Africa due to the presence of militant Islamic groups. Can you tell us what Christians are facing in parts of Nigeria and Sudan?

CURRY: Well, Nigeria is the real epicenter here, particularly northern Nigeria where you have two very radical groups: Boko Haram, which is associated with al Qaeda and ISIS. It has the same ideology, which is really the critical part, because what they’re doing is they’re attacking Christian villages, trying to push Christians out of the north, many of them over the last six to seven years have already gone down into the southern part of Nigeria.

But with COVID relief, you’ve added an extra filter of difficulty, particularly because some of the food resources, hygiene resources that would typically go to these sorts of impoverished villages in the midst of COVID, these goods are being distributed by Islamic governors of these Sharia law states and they’re basically saying to Christians this aid is paid for by Islamic taxes, you are a Christian, you are an infidel, we’re not giving you food, we’re not giving you hygiene kits.

So, we’re drawing attention to this for a couple of reasons: it’s an intense situation, it also highlights the difficulty of Christians in general in that larger region. And we just really want people to be aware of it, to be able to step up and pray, first of all, if they’re people of faith. And to support them. …

BASHAM: What about other countries, like Vietnam, where it’s the government, not militant groups, opposing Christianity?

CURRY: Well, what we really see as regards to issues around COVID relief being withheld from Christians is in what I would call the Islamic parts of Asia. It’s not to suggest that all of Islam would approve of this, but where there are radicals, where those groups exist or governors can withhold that, it’s happening in Islamic Asia.

So you’ve got areas of India as well where there might be extremist Hindu groups that will do that. We really first began to notice it in places like India and the Islamic parts of Asia. So, but Vietnam, we haven’t seen the COVID relief to the same degree because the metropolitan areas have a lot more freedom.

BASHAM: Are international aid groups aware of what’s happening? Are they taking steps to prevent this kind of discrimination and persecution?

CURRY: I think everybody has largely been focused on, first, how can we get our hands on food supplies, on aid. I don’t think everybody’s been focused on this, which is why we’re drawing attention to it. The reality is that there’s about 100,000 people who we’ve been able to help in Asia, in some of these Islamic areas.

We’ve identified, I think, somewhere around 12,000 families in northern Nigeria that need this aid and the hygiene kits and the things that they need to stay safe and to eat in the midst of the COVID thing. So, these are pockets—significant pockets—but I think that it hasn’t risen to the wider awareness because people are just scrambling, as you know.

And we’d love to see people be aware of this to the degree that governments can step in and make sure that this aid gets distributed to Christian minorities and other minority groups who would be withheld. That would be helpful. Of course in Nigeria, that’s not an expectation we have because the government has been so ineffectual in protecting Christian communities from Boko Haram and the extremist groups. It’s hard to believe they’d step forward now, but we certainly hope they do.

BASHAM: David Curry is CEO of Open Doors USA. Thanks so much for joining us today.

(AP Photo/Sunday Alamba, File) In this file photo taken Saturday, Aug. 27, 2016, women displaced by Islamist extremists wait for food to be handed out to them at the Bakassi camp in Maiduguri, Nigeria.