Fighting to protect people of faith

The U.S. Commission on International Religious Freedom releases its 2021 report

Uyghurs and other students at the Xinjiang Islamic Institute during a government organized visit for foreign journalists in Urumqi in western China on April 22, 2021. Mark Schiefelbein/Associated Press 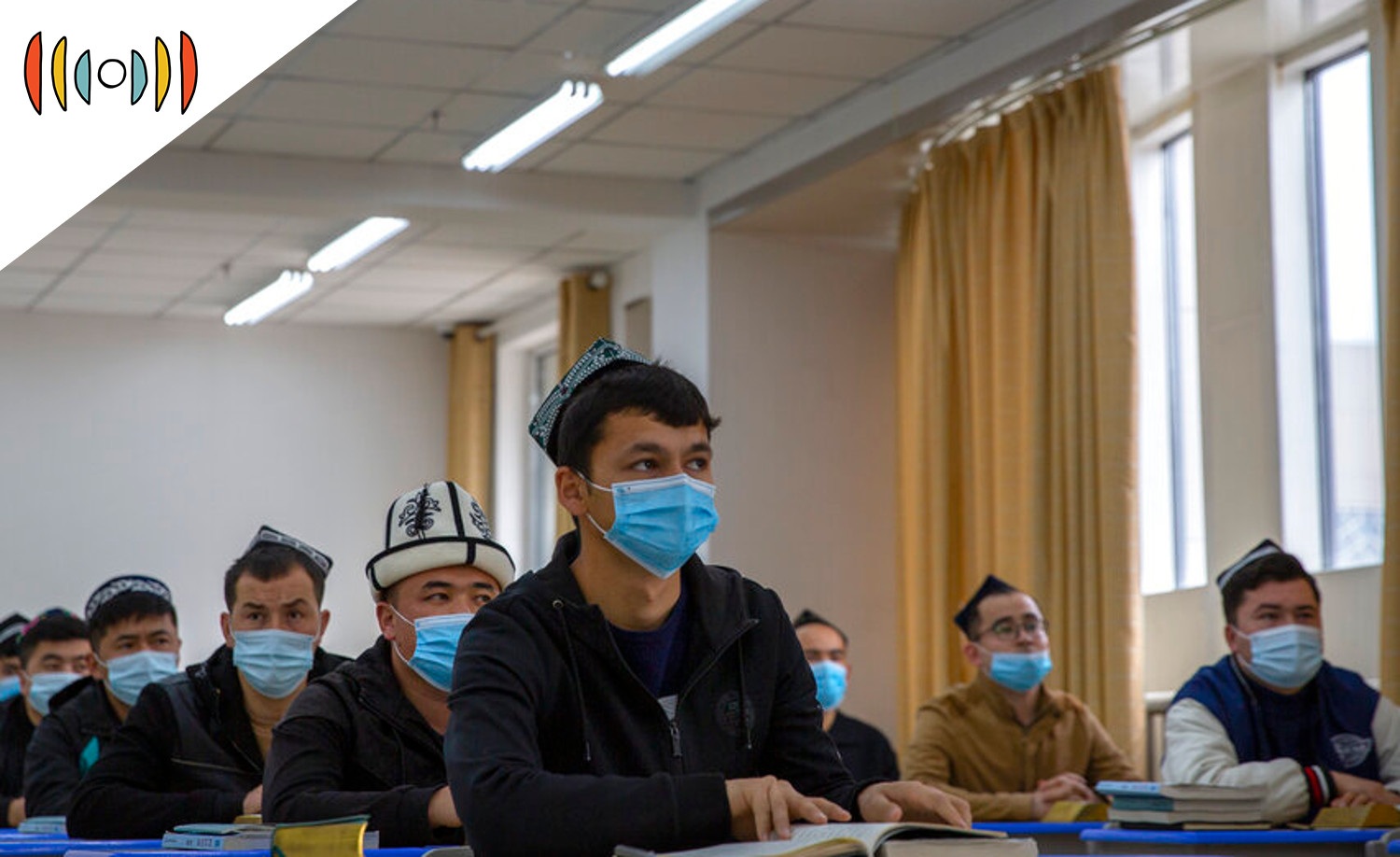 Every year the U-S Commission on International Religious Freedom issues a report on persecution.

The 2021 report came out in late April. It calls attention to attempts by governments around the world to control or suppress faith. All kinds of faith. It also lists terror groups that target people because of their religion.

Still, its recommendations are influential. They matter to the president, the secretary of state, and Congress.

That’s especially true for the nations the report criticizes.

Joining us now to talk about the latest report is Anurima Bhargava. She is one of the commissioners.

REICHARD: As we mentioned, your commission issued its report last month. This year’s report was 108 pages long, lots to cover. What would you say are among the most troubling things?

BHARGAVA: I think that for us, in China, and the ways in which China's influence is extending a cost across the neighboring countries to China. But frankly, in all kinds of ways through the use of their own use of technology, surveillance in targeting religious communities, particularly the Uyghurs, which have been a focal point of the commission that continues. And then certainly, we don't have information on the ways of the kind of one on the ways in which COVID impacted communities like the Uyghurs in China. We certainly have seen the long arm of China around around that region, as a way in which even communities like the Rohingya in Burma are impacted by how it is that the economic and other security expansion of countries is pushing out religious communities and religious minority communities.

We continue to be significantly concerned about what's happening in Burma, in part because of the military coup. And that's the military who pushed out the Rohingya over the last many years and are part of what we we think constitutes a genocide in that in that area.

We also remain concerned about what's happening in Syria, and in particular in northeast Syria area that many have focused on as a place where there was potential for many in different religious communities to live together but has been really ravaged by what's happening with Turkey and and the Syrian government. And, and also, you know, what's been happening in neighboring Iraq and people coming over. And so those are a couple of places.

We once again designated India as a country of particular concern for the second year. And our concern even now as COVID is ravaging India, about the ways in which religious concerns and religious communities are being impacted by that.

REICHARD: And the good news is that things aren’t getting worse everywhere. What good news did you find?

BHARGAVA: We were actually able last February to visit Sudan. And I want to highlight what's happened in Sudan, and in 2019, was that there was a joint civilian, military transitional government that was put into place after the many, many year long rule by an Islamic government. And in the wake of that transition, there have been all kinds of changes that have happened in Sudan, from the lifting of restrictions on women and guardianship laws, to the addressing of things like female genital mutilation, to the ways in which there the blasphemy apostasy laws that really criminalize anyone who did not adhere to a particular religious interpretation and religious practice in Sudan. That that has really opened up. There has been a wide scale effort to change textbooks and how education is taking place in the country, to to allow for the celebration of holidays like Christmas home, and so what we saw in Sudan was a real change, a sea change in the in the last year and a half, even during COVID. And that continues. And so that's one of the highlights that we have talked about, as as a place that came from a really, you know, a place of real concern for such a long time to, you know, in many ways led by women and others who really on the ground changed what it meant to be part of Sudan and be someone whose ability to practice their faith is respected.

REICHARD: Anurima, what are USCIRF’s key recommendations this year?

BHARGAVA: I think the power of USCIRF in many ways is is to try and serve to shine a light on what's happening for religious communities around the world. Oftentimes, especially these days, where we're seeing the kind of religious persecution and violence that we're seeing. It's hard, you know, we move from one country's great crisis to another. The other thing that we've been trying to do is really to focus on some of the trends that we're seeing. So I spoke about the long arm of China. I spoke about the the the the ways in which technology GE is exacerbating religious tensions. It's there's a lot of disinformation, there's a lot of hate that's being spread through social media, through other means that is having a disastrous effect on religious communities around the world.

And so our goal is also to think about what some of those trends are and to focus on those as well. And the last thing to say is that, you know, for the United States to practice what it what it preaches, right? To recognize, and we advocated very strongly for the refugee resettlement ceiling to be to be lifted and to be as high as possible. It had reach record lows in the last few years. And it's important that those who we’re advocating for who are experiencing religious persecution and violence around the world, that they do have a place, that they might find safety, that they might find it a place that they can worship. And we do that not only by that kind of advocacy, but also through a religious prisoners of conscience project where many of us advocate for individual prisoners who are who have been detained because of either their advocacy for religious communities or because they are a member of a religious community and are trying to practice their faith.

REICHARD: Was there anything that surprised you in this year’s report?

BHARGAVA: I don't know if there's anything that surprised us. And the reason the reason I say that is because in 2020, where there's the the overarching story was COVID. I don't think we saw great shifts.

What I'm hoping is that part of what we learned through COVID is that we are close to someone who might be in a neighboring country or across the world as we are to someone who lives right next to us. And that there's an understanding of the ways in which being part of a community and respecting those within that community and their ability to do something like practice their faith — that we come out of COVID with with a greater understanding of how important that is. That is, I hope. We will see how that goes.

REICHARD: Explain a little bit more about what happens with this report? How does it translate into action and how does it make a difference?

BHARGAVA: There are a couple of different ways in which the report makes a difference. First and foremost, I think the impact of really highlighting with the the highlight being so pointedly at religious freedom, without really worrying about our diplomatic or economic or security, the kinds of considerations that often people take into account, when they're looking at our relationship to a country, the sort of laser like focus that we have on religious freedom is really important. And perhaps the most powerful tool that we have, which is to be a documenter of what's happening with regards to religious persecution and violence.

Secondly, I will say that part of what we are doing is bringing to the attention to the State Department and administration and Congress of issues around religious persecution and violence. And many times, what we're able to, you know, we have an extraordinary staff and what our researchers and others are able to really talk about in terms of the ways in which citizenship laws are playing out in the country, for example, those are things that are really important to be able to highlight to be able to talk about the ways in which they are actually systemic in nature, and how it is that that they really are shaping the ways in which we should be engaging as the United States government with a country.

And so, I think that's the other part of the impact is that, you know, we are respected by a partisan body. And I think some of the impact that we've had over the last couple of years is the fact that we have spoken with one voice, across party lines. And in the United States today, we don't have that all that often. And so to have the kind of recommendations that are coming out of the Commission, that are coming from those who are are very much leaders on the Republican and Democratic side, coming together to say these are things that we should be worried about around the world, and they're going to come home, you know, in many ways and to roost in terms of what's, you know, we know now as we’ve known for a long time. But we certainly know even more acutely now that what happens around the world comes back to us impacts us is you know, we feel it, we, we see it, and it's important that we actually be able to speak to it. And that's and that's what we've been doing.

MR: Anurima Bhargava is chair of the U-S Commission on International Religious Freedom. Anurima, thank you.