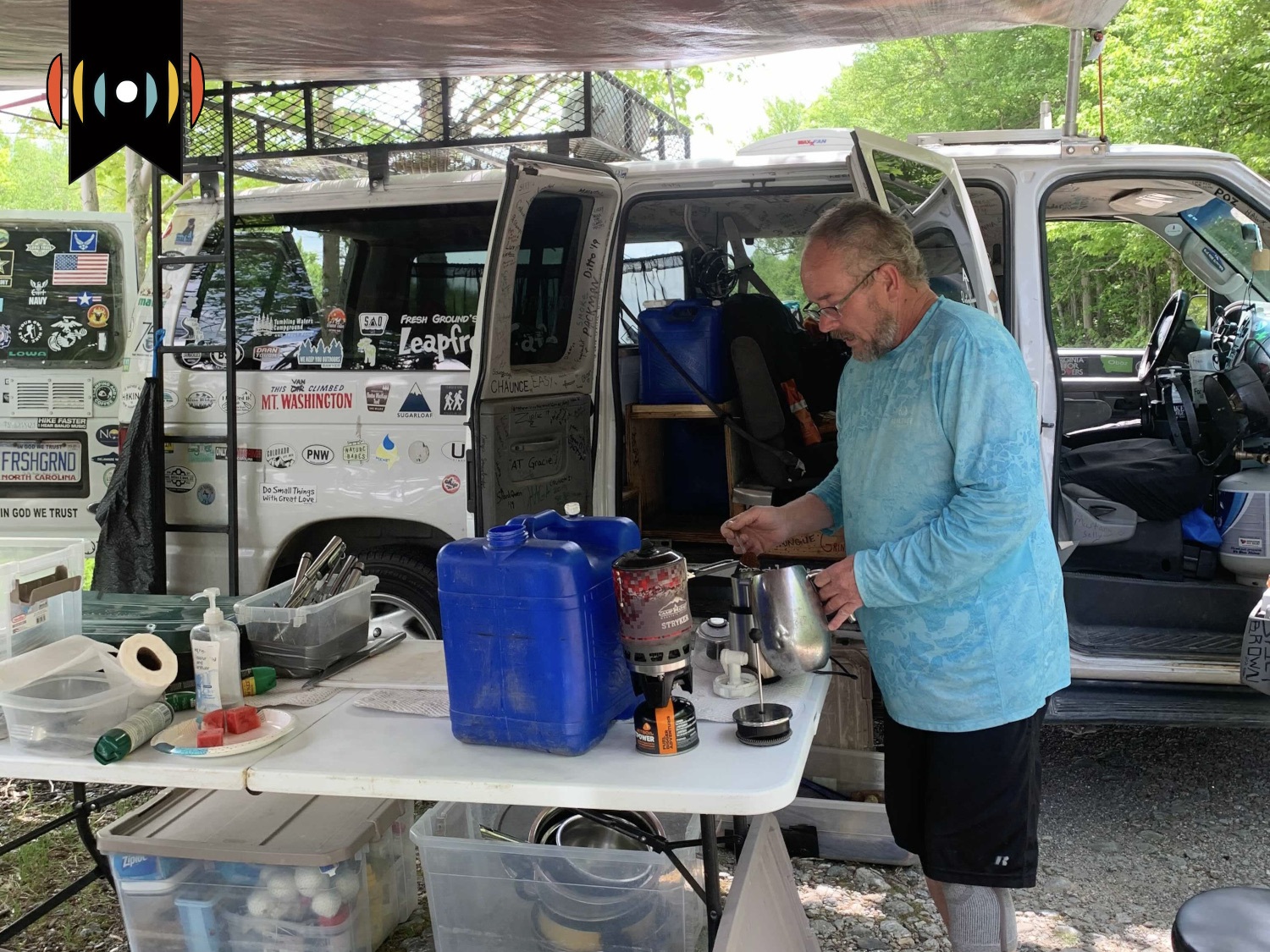 Coming next on The World and Everything in It: angels in hiking boots.

Each year volunteers go out of their way to help the thousands of people who hike America’s long distance trails.

REICHARD: WORLD reporter Jenny Rough recently caught up with a trail angel on the Appalachian Trail.

JENNY ROUGH, REPORTER: Practice random kindness and senseless acts of beauty. Not all who wander are lost. Do small things with great love. Kill your TV. Always take the scenic route. Jesus was a hiker.

These bumper stickers—and many, many more—plaster a white van in a Walmart parking lot in New Hampshire. On a Saturday morning, the van’s owner emerges from the store wheeling an extra-large shopping cart filled to the brim.

TIM DAVIS: Today, I’m going to cook bratwurst and French fries. I think I’m going to make a pasta salad. But I have fruit. Apples, oranges, and bananas. They love Gatorade. It’s hot today. I have chips. I have a container full of cakes and cookies. I have three watermelons. And I have strawberries. And I have two pineapples.

Once he loads his van, he’ll drive to a trailhead in the White Mountains, right along the Appalachian Trail. There, he’ll hand out food and drinks to anyone who treks on by for free.

The man’s name is Tim Davis.

DAVIS: But my trail name is Fresh Ground.

A trail name is a nickname given to a long-distance hiker, usually bestowed by others, and based on a personality trait. Fresh Ground likes his coffee freshly ground. So his brother gave him that trail name years ago, back when Fresh Ground hiked. Before his knees gave out. Now, at 57, he’s known as a trail angel. A volunteer who supports hikers with food and respite.

DAVIS: For me, it’s a ministry. When the hikers come up, it’s like an oasis for them. Doesn’t cost them a dime.

He believes it’s a divine calling.

DAVIS: I try to create this environment; it’s a rest stop for them. What God put in my heart is I’m setting his table for them. So that’s what I’m doing. It’s all about the hikers.

He does this full time. Support comes from online donations—usually from former hikers who encountered him on the trail. Fresh Ground walked a long, hard road to reach this point. He says, in his younger years, he was a pothead. That led to harder drugs. In his 30s, his life pretty much went off a cliff.

DAVIS: I was a crack cocaine addict for years.

He tried to get clean. Then, 11 years ago, his brother was killed in a drug deal gone bad. This time Fresh Ground was done with drugs—for good. He credits God for his recovery.

DAVIS: I was an atheist. And I became a Christian.

He began to pray and read the Bible regularly. Soon after, he started to wake up in the middle of the night. Always around the same time.

DAVIS: Like 1, 2 in the morning. Every night, pretty much. And then in my heart, feed hikers was there. Feed hikers, feed hikers. So I went to work one day. I had a Christian friend named Beth who worked in the office. I went in and said, “Beth, can I talk to you? This weird thing keeps happening to me. I keep having this thought in my heart: Feed hikers.” She says, “Well, go do it!”

Back then, he had one stove and two pots. He set up a table on the Appalachian Trail in Georgia and served his first meal: chicken soup and coffee. Fresh Ground says God created him in a way that makes being a trail angel a perfect fit. A simple country boy who loves cooking. Loves the woods. And loves—

DAVIS: Talking. I’m ADHD and OCD. I wake up, I get excited when hikers come in. God puts this excitement in me. So the hyper, the ADHD kicks in hard when they show up.

Today, his van holds multiple stoves and pots, two deep fryers, coolers. Everything has a place. Including a spot to sleep.

DAVIS: It’s a puzzle. Under my bed, see I have, that’s a mosquito net. I have a 10 x 20 tarp that goes around. That goes around and makes a room. My clothes are in that container. My backpack is up there. And then if you look in the front. Every little nook and cranny. Like my poles that go on my tarps are there. One of these containers has tarps. One has towels. Those are my snack bins.

He starts serving hikers in Georgia in February. And follows them northbound up the trail and then drives back down the coast, serving the southbound hikers. The hikers adore him. Evidenced by the thank you notes, artwork, and poems they write for him all over the inside of his van, with sharpies.

DAVIS: Some days I’ll lay in here and I’ll look up and I’ll see the murals and the signatures. And it’s pretty cool. Pigpen, I’m going to meet them tomorrow. And Pooh Bear. They’re my kids.

Today, before heading to the trail, he fills coolers with ice to keep the drinks cold.

At the trailhead, he sets up a large tarp.

DAVIS: This goes up pretty quick.

Including a sanitation station. Important when feeding dirty, stinky hikers.

DAVIS: Two tables. One is for hand wash. I do a hand wash system. I do bleach dunk. Soap. And then rinse and clean towel. And then the other table’s for cooking on.

DAVIS: That’s for scrubbing forks and spoons. And then I put soap on that.

AUDIO: [Setting up trash can]

DAVIS: So a watermelon farmer taught me, you’re looking for that hollow sound.

For the coffee, he fires up a propane stove—

And grinds the beans.

Fresh Ground doesn’t want hikers to feel like they have to listen to an evangelistic message to get the food. He simply loves and serves.

But hikers often need something more than food. A listening ear. First aid. A word of encouragement. Replacement gear. And if hikers want to talk about God, or a spiritual walk, Fresh Ground is ready for that, too.

DAVIS: What I try to do is provide what’s needed. So put yourself in a position and God always brings stuff in front of you, and it’s up to you to recognize that’s a need that you can fill. So that’s that internal question we need to ask. Should I fill it or shouldn’t I fill it? And it’s such a joy to be in that position to fill it.