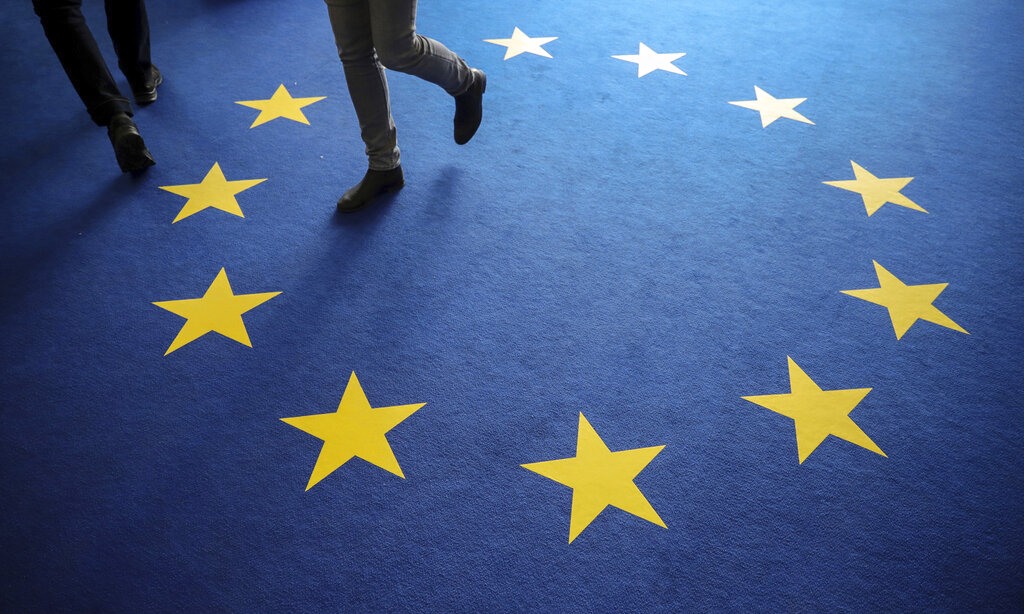 NICK EICHER, HOST: Coming up next on The World and Everything in It: governing Europe.

Elections over the past weekend for the European Parliament are bringing big changes. Traditional centrist parties took a hit at the polls with gains made by nationalist parties, the Greens, and pro-business parties.

MARY REICHARD, HOST: What does this mean for the European Union’s future? WORLD Radio correspondent Jenny Lind Schmitt joins us now to talk about it. Jenny, first off, can you give a brief overview of how these elections work?

JENNY LIND SCHMITT, REPORTER: Yeah. The elections this past week were to elect representatives from each of the 28 member nations. Each representative serves a five-year term in the European Parliament. The parliament has 751 members! The number of parliament members a nation gets is determined by population–kind of like our House of Representatives. So for example, Germany gets 96 seats while Malta has just 6. When the U.K. leaves the EU, some of those numbers will shift slightly.

REICHARD: Tell us about the political parties involved?

SCHMITT: Well, each nation has its own national parties on the ballot. In some nations, like Italy, the members represent particular regions. Others, like France, are elected to represent the entire nation. France alone had at least 30 parties on the ballot, so if you multiply that over 28 countries, you get a little idea of the organizational challenge of these elections.

Once in the Parliament, the different national parties have to find common ground with similar parties from other nations that they can ally with.

REICHARD: Okay, which parties are out and which ones are in after this weekend’s election?

SCHMITT: OK, the main thing to know is that the two traditional centrist parties lost a lot of seats. Those two parties are the European People’s Party and the Progressive Alliance of Socialists and Democrats. Those just loosely correspond to our Republican and Democrat parties. For 40 years now they’ve formed the centrist coalition that built the EU. But they no longer hold the majority.

The big seat winners were the Greens, particularly in Germany, and the nationalist parties, especially in France and Italy.

What I’d say, Mary, is the takeaway is there’s going be more and different voices in the EU Parliament.

It will be harder to form alliances across nations. The nationalist parties are trying to coalesce together, but because they’re so nation-focussed, they don’t have that much in common to build on.

REICHARD: Jenny, you mentioned “more and different voices.” Is that necessarily a bad thing?

Something important about this election is that voter turnout rose for the first time since Europe-wide elections began in 1979. Fifty percent of voters cast ballots, compared to 2014, when 42 percent of voters participated.

I think that, combined with the gains of the populist parties tells us two things:

One is that there is a renewed interest in the European project. While populist parties gained, it wasn’t by the huge margins some had hoped for. And we’re hearing a lot less about wanting to leave the union.

REICHARD: So that’s the first takeaway. What about the second?

SCHMITT: Well, this is where the differing voices come in. While people want the EU project to continue, they also want to have more of a say in its future.

For years, voters didn’t really pay much attention to these elections. They left the bureaucrats in Brussels to go about their business. It’s only in the last five years as people have felt more of the negative effects of EU policies and regulations on the ground level that they’ve started to take notice.

REICHARD: It seems such a disconnect between citizens and their understanding of how politics actually directs their lives!

SCHMITT: Uh-huh. And some voters feel like the populist and nationalist parties are the only ones who take their concerns about immigration and government overreach seriously. So different voices in the EU Parliament may slow some things down, but it could also mean that they’re raising issues that need to be raised.

REICHARD: Okay, Jenny, so then what’s next?  Elections are often seen as a bellwether for the next cycle of national elections?

SCHMITT: Right. So that’s got the centrist parties feeling the heat. Europe is becoming more fragmented like the United States.  So, the mainstream parties need to reinvent themselves if they want to appeal to voters in their next national elections.

REICHARD: Final question. What about the UK? And why were the Brits even voting in these elections if they’re leaving the EU?

REICHARD: Jenny Lind Schmitt is a WORLD Radio correspondent based in Seattle and Switzerland. Thanks, Jenny.

(EUrVote via AP Images) This image released on Wednesday, May 29, 2019, shows the EU flag. The Media service EUrVOTE will be providing continuing coverage of the European Parliament election.