Equal Rights Amendment supporters in the Senate chambers at the Capitol in Richmond, Va., on Monday Associated Press/Photo by J. Steve Helber 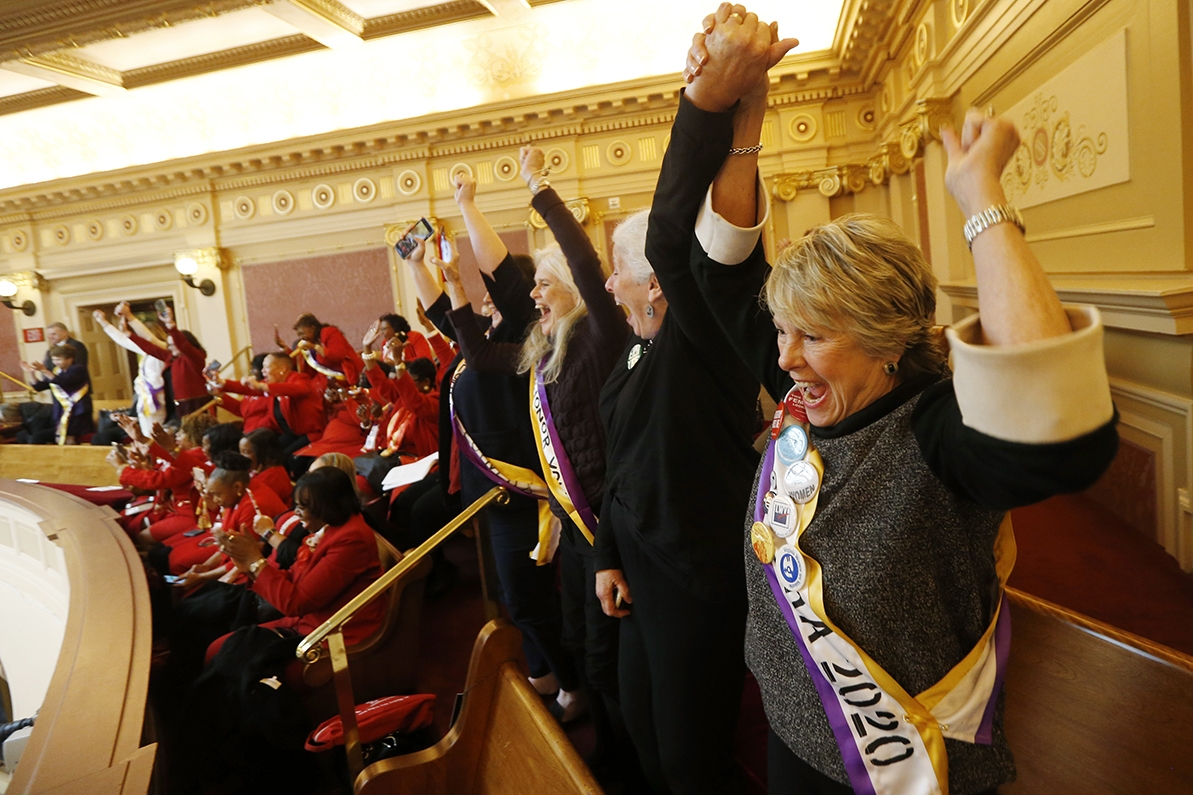 MARY REICHARD, HOST: Coming up next on The World and Everything in It: the battle over the ERA, the Equal Rights Amendment.

Congress first passed it in 1972 and eventually gave states 10 years to get it ratified. Article V of the Constitution requires that to amend it, three-quarters of the states must ratify. That’s 38 states.

But only 35 agreed to ratify ERA. And five of those quickly reversed course.

REICHARD: So the amendment died and the deadline to ratify it passed.

But some states have been reintroducing ERA in hopes that that would restart the ratification process. Three years ago, Nevada approved a ratification measure, making it state number 36, followed by Illinois a year later, state number 37.

Last week, Virginia voted in favor of ratification, so the required number of states, 38, is now met—ironically,  38 years past the deadline.

For ERA supporters, the vote marked the end of a decades-long battle to add the amendment to the Constitution.

But critics say the Virginia vote doesn’t change anything. The original deadline set by Congress to ratify the amendment has passed and the amendment failed. Period. Critics also argue Congress can’t retroactively eliminate the deadline. Denise Harle is an attorney with Alliance Defending Freedom.

HARLE: There is absolutely no example or case ever of an amendment being ratified after it expired without the requisite number of states adopting it.

Back in December, attorneys general from Alabama, South Dakota, and Louisiana anticipated that Virginia would approve the ERA. So they sued to block its eventual addition to the Constitution.

The Trump administration’s Department of Justice agrees with those states. Last month, in a 38-page opinion, it said ERA supporters would need to start over to add the amendment to the Constitution.

States supporting the ERA fired back. Last week, the attorneys general of Virginia, Illinois, and Nevada sued to force the amendment’s approval. They argue Article Five of the Constitution does not give Congress the power to impose ratification time limits.

Carol Jenkins is the co-president of the ERA coalition. In a November interview with C-Span, she said today’s ERA ratification is on solid legal ground.

JENKINS: We were told by our legal scholars that it does indeed count.

Jenkins also argued the ERA is necessary to put women on equal legal footing in all 50 states and that the Me Too Movement has made clear that women are not yet fully protected in American society.

JENKINS: What we see after #MeToo and all the progress women have made, can we truly say that as a country we are not willing to give women equal rights?

HARLE: It’s not clear to me what hole it could possibly even be fixing.

Harle and other critics point out that the ERA’s vague language would actually backfire for women. The text of the amendment never uses the word “woman” or “female.” It simply says “the law shall not be denied or abridged…on account of sex.”

HARLE: If we can’t make a distinction based on sex,  instead of protecting women, it’s pretty clear that it could easily be used to strip women of some of the protections we have now.

Pro-abortion supporters have also latched onto the ERA as a way of enshrining abortion in the Constitution.

Steven Aden is the chief legal counsel at Americans United For Life. He notes pregnancy, of course, only affects women. Under ERA reasoning, abortion must be accessible to make women the same as men.

ADEN: When and if Roe v. Wade is overturned by the Supreme Court, they still have an avenue to claim that, uh, there’s a fundamental right to access abortion through all nine months in the Constitution. That of course, is very dangerous to a life in the womb and to the mothers that carry them.

Victoria Cobb is the president of the Family Foundation of Virginia. She says she and other ERA critics believe their legal case will eventually prevail. But just because the law seems clear doesn’t mean the courts won’t issue a surprise.

COBB: We know courts are what courts are and there are times where courts have made wrong decisions. So we are still sounding the alarm about the dangerous effects of the equal rights amendment should something go awry in the legal process.

For now, the competing lawsuits will play out in the district courts, but most legal analysts expect the ERA debate will eventually end up at the Supreme Court.