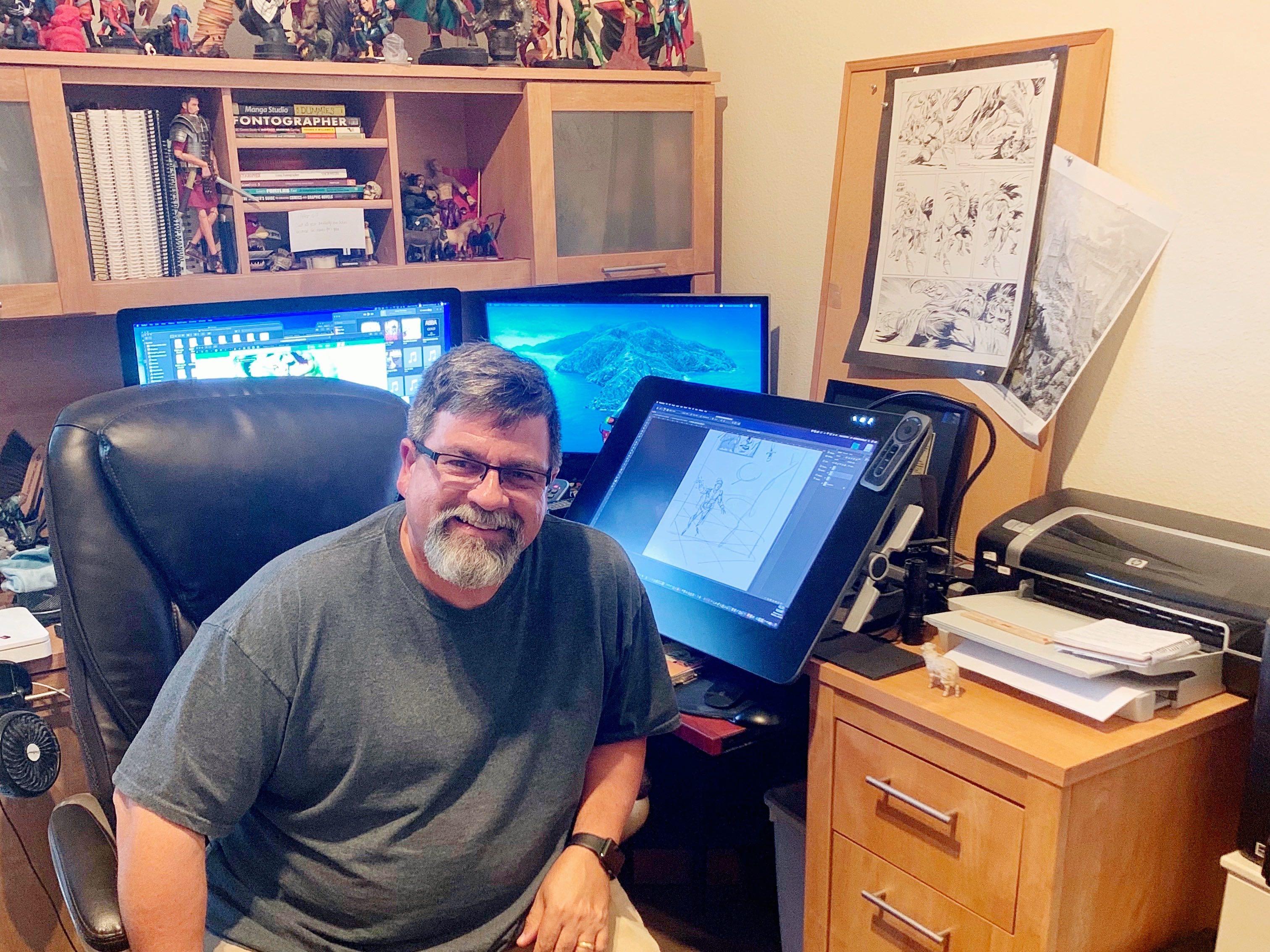 MARY REICHARD, HOST: And I’m Mary Reichard. Coming next on The World and Everything in It: animating Scripture.

Some of America’s most famous heroic characters are brought to life in comic books and comic strips: think Superman, Wonder Woman, Batman, Captain America, Spiderman … and the list goes on.

Well, ten years ago, a new comic book came out that centered around a much more important hero. One who didn’t use might to make right.

BASHAM: The comic book is called the Action Bible and it tells the story of Jesus from the creation account to His death and resurrection. So far, it’s been translated into more than 30 languages and has sold well over a million copies in the United States. WORLD’S Sarah Schweinsberg met up with the illustrator.

CARIELLO: Let me show you something.

SARAH SCHWEINSBERG, REPORTER: Like many garages, Sergio Cariello’s has a good number of boxes. But these aren’t packed with old tax returns, family photos, or birthday cards.

CARIELLO:  This is the Action Bible right here. All the originals.

Each page has several illustrations on it, adding up to thousands of individual drawings that started as simple pencil sketches. Once Cariello was happy with the rough drawings, he had to trace each one with ink.

CARIELLO: We don’t want the pencil to show through. So we erase the pencil and the ink will remain.

Then he enlarged, scanned and emailed each layout to the publisher. All-in-all, the process took more than three years.

The project was a dream come true.

Sergio Cariello was born in Brazil, but he grew up loving American comics.

CARIELLO: Whenever I wanted to read American comics, I will go to the local airport and read the the original English, colorful comic books.

He also learned to create his own.

CARIELLO: My brother and I, we would fill you know every piece of paper with our scribbles and sometimes we will draw on the walls, on the furniture…

Cariello dreamed of coming to the United States to study and work for comic studios like Marvel or DC.

When he was 20, a Bible college in Dover, New Jersey, gave him a scholarship. There, Cariello covered the rest of his tuition by drawing caricatures of students.

CARIELLO: I had made a big sign here. Have your caricature, 1 minute caricature drawn by Brazilian artist for only $3.

Then he attended a graphic art school. There he landed an internship with Marvel Comics. Marvel liked his work so much, they hired him to freelance.

CARIELLO: So I got work to do Daredevil and Spider Man and Conan.

Not to be out done, DC picked him up too.

With those experiences under his belt, publisher David C. Cook approached Cariello about creating the Action Bible.

Cariello said he wanted to use the style that made DC and Marvel comics so popular: action. And action is created by what Cariello calls dynamic drawing.

CARIELLO: You feel the emotion by making the figures pop out of the page with a choice of angles, and choice of poses, even exaggerating the pose a bit more from reality to make it really pop. And thus, we marvel at it, right?

Back inside his house, Cariello’s small office looks like a toy museum.

The office is filled with figurines of superheroes, animals, a sword, and even a donkey’s jawbone.

CARIELLO: I use it to draw, Sampson, and I wanted to know how somebody would hold a Jawbone in his hand, to kill 1,000 Philistines.

Today, Sergio Cariello no longer uses a pencil. He draws on a large digital pad with an electric stylus.

CARIELLO: I have this little guy here. He helps me a lot.

He sits in his office chair and holds a figurine of a man in his right hand and draws with his left.

CARIELLO: See he moves and stuff.

He stretches out the model’s arms and starts to sketch.

CARIELLO: And I can take pictures or just pose them in a way that I know how to draw them.

But sometimes knowing what to draw is more difficult than knowing how to draw it. Figuring out how to convert the words of Scriptures into pictures that would make those words clear was a challenge.

CARIELLO: Whenever I don’t know what to do, I just asked the Lord, you know, what would you have me do here? And sometimes  I just open a good book from art, and start flipping the pages, and my juices start, you know, pumping again and oh, I know.

Cariello creates a fresh page on his drawing pad. He starts sketching the fight between David and Goliath.

CARIELLO: So right off the bat, you see a big foot of a giant. And you see that David is much smaller. You want to convey in a story that we are dealing with a small guy fighting a huge guy, and we want to show that in a drawing.

After he finished drawing the Action Bible, Carellio worked with artists to color the comics. Sometimes people have criticized the way characters look. For instance, Jesus has brown hair, brown eyes and fairer skin.

Cariello says while it’s important to portray historically accurate characters, getting caught up too much in physical attributes misses the point.

CARIELLO: I’m not saying that the way I drew him is exactly the way he is. I’m saying that God uses our gifts when we present it in a way that we are glorifying him. So he anoints it and uses [it] regardless of us.

This month, the Action Bible publisher is releasing a 10th anniversary edition.

Sergio Cariello says he believes the Action Bible continues to attract an audience because many people are visual learners. They also love a good Superhero story. And it doesn’t get better than the Bible.