In this Feb. 9, 2021 file photo, the Bitcoin logo appears on the display screen of a crypto currency ATM. Charles Krupa/Associated Press Photo 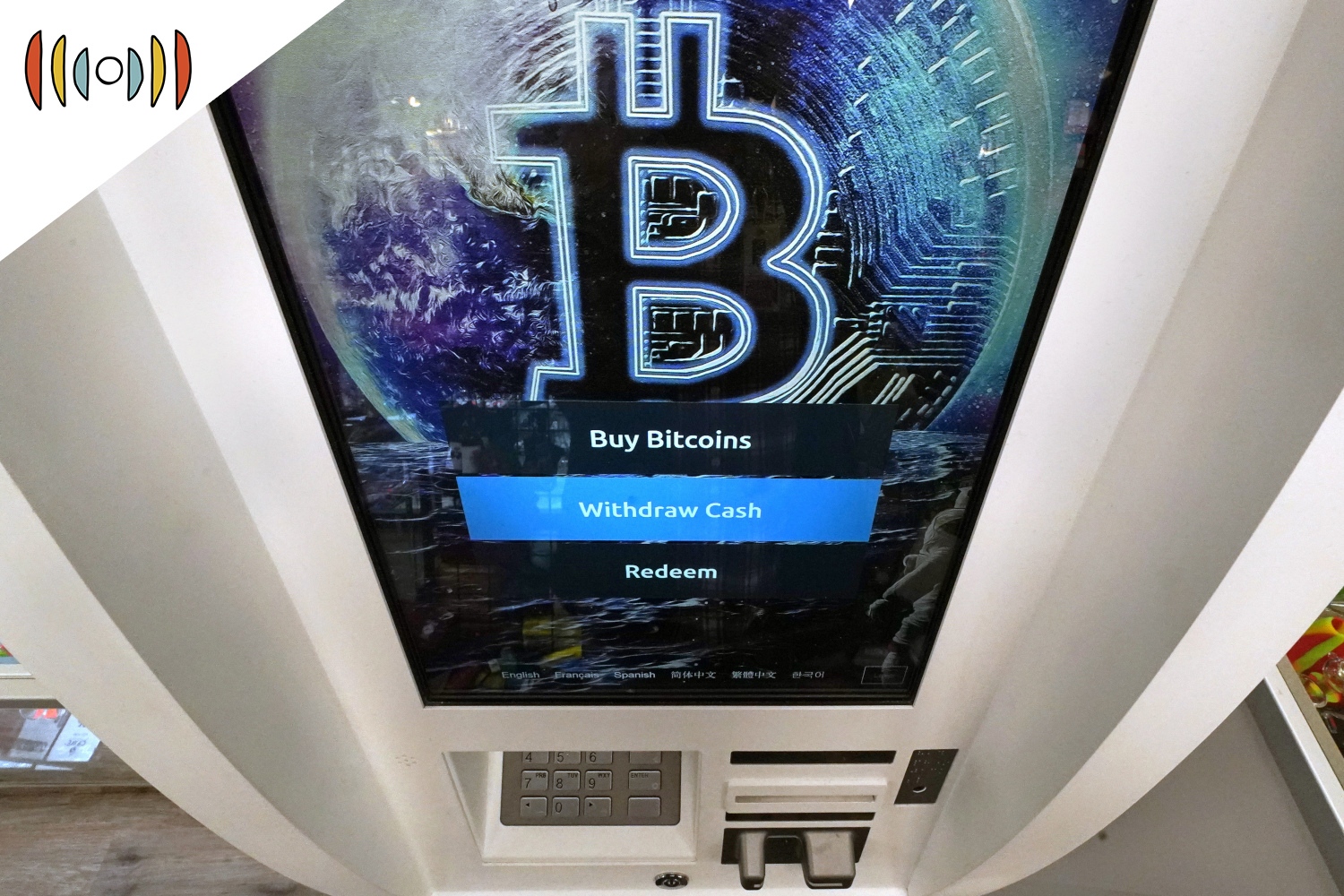 Cryptocurrencies like Bitcoin, Ethereum, and Atom have governments around the world worried. That’s because they operate outside traditional, government-controlled financial systems. In response, many governments are creating their own completely digital currency.

We’ll be referring to this later, Central Bank Digital Coins—C-B-D-C.

REICHARD: Digital money would be convenient. But it would also give the government much more control over our personal finances. WORLD’s Sarah Schweinsberg reports.

Test users can download a mobile-phone app from the People’s Bank of China. The app holds small amounts of the government’s digital yuan. Users can spend it at stores like Starbucks and McDonald’s.

In this October 2020 report, a user shows a Chinese reporter how the currency works.

USER: This is the app.

USER: You can see the payment directly and you can also make a transaction here by putting in the telephone number.

The digital currency’s debut came after six years of experimenting. In the coming years, the authoritarian country says it plans to roll out the currency across the country.

China isn’t alone. Ecuador, Senegal, Singapore, and Tunisia have also launched their own national digital currencies. And at least 50 other countries are researching their own versions. The United Kingdom is considering creating a CBDC called “Britcoin.” The European Union wants a digital Euro in four years.

And in May, the United States Federal Reserve said it was researching its own completely digital dollar.

Martin Chorzempa is a scholar at the Peterson Institute for International Economics. He says national interest in digital currencies is a direct response to cryptocurrencies.

CHORZEMPA: Many countries are worried about their monetary sovereignty. China's efforts really started in terms of developing a digital currency after Bitcoin really took off there in 2013, and made them worry that there might be some parallel currency, they can't control that circulating in China, that would allow people to get around capital controls, move their money out freely out of the country, transact without any record for the tax authorities.

Governments also got spooked when Facebook announced in 2019 that it would launch Libra—its own cryptocurrency—for its 3 billion users.

CHORZEMPA: That made a bunch of countries really worried that their domestic currency was going to potentially get replaced by something that was issued by Facebook.

But how exactly would these digital currencies work? They could never be converted into a physical form. They would use the same blockchain technology as cryptocurrencies.

But unlike cryptocurrencies, they would be backed and directly controlled by the government. They would also function more like physical cash, meaning they could easily be used to buy everyday goods and their value would hold relatively steady.

Peter St. Onge is an economic policy scholar at the Heritage Foundation. He says CBDCs could be distributed in a couple different ways.

ST. ONGE: The sort of simplest one is where it's administered through the banks. Alright, so the bank, basically, from the end user perspective, it would look identical to how dollars do today... Now a second design philosophy, which the banks really don't like, is a design where you basically bypass the banks. Alright, so individual Americans could hold a, essentially a bank account at the Fed.

Second, blockchain technology would let the government keep track of every single transaction ever in a giant ledger.

HERSCH: So when there's a digital ledger of every transaction, it's easy for authorities to be able to monitor money laundering, say for narcotics, or human trafficking, or terrorist financing.

And finally, if a CBDC could cut out banks, more people could access financial services.

HERSCH: There are a lot of people that don't have access to standard bank accounts, checking accounts. And by creating a universal system run by central banks this would improve financial inclusion.

But for all of those possible upsides, Central Bank Digital Coins have some serious red flags.

ST. ONGE: If the Fed has direct control of your money...they could just tell you, hey, listen, we need you to spend money to make the economy, you know, come alive. And so if every month we're just gonna go ahead and take 6 percent of your money away until you spend it.

ST. ONGE: So if this coin fundamentally is being managed at the Fed, in theory, they would know every single dollar you spent, and who you gave it to. So if you donated to a political cause they don't like, if you bought something that they don't like, China has been the leader in this, which is unsurprising because China likes authoritarian things. And this is a huge increase in authoritarian control over the people.

CHORZEMPA: If you provide a form of payment and a way to store money that is directly backed by the Central Bank, then some people might decide they want to take their money out of the banks and put it into there, the risk there is that if you suddenly have money pouring out of the banks, you could make some serious negative economic dent, and even potentially cause a financial crisis.

It’s for all of these uncertainties that Chorzempa, St. Onge, and Hersch say the possibility of a CBDC in the United States is still a long way off, but maybe still too close for comfort.