Culture Friday - How to be a Christian in a crass culture 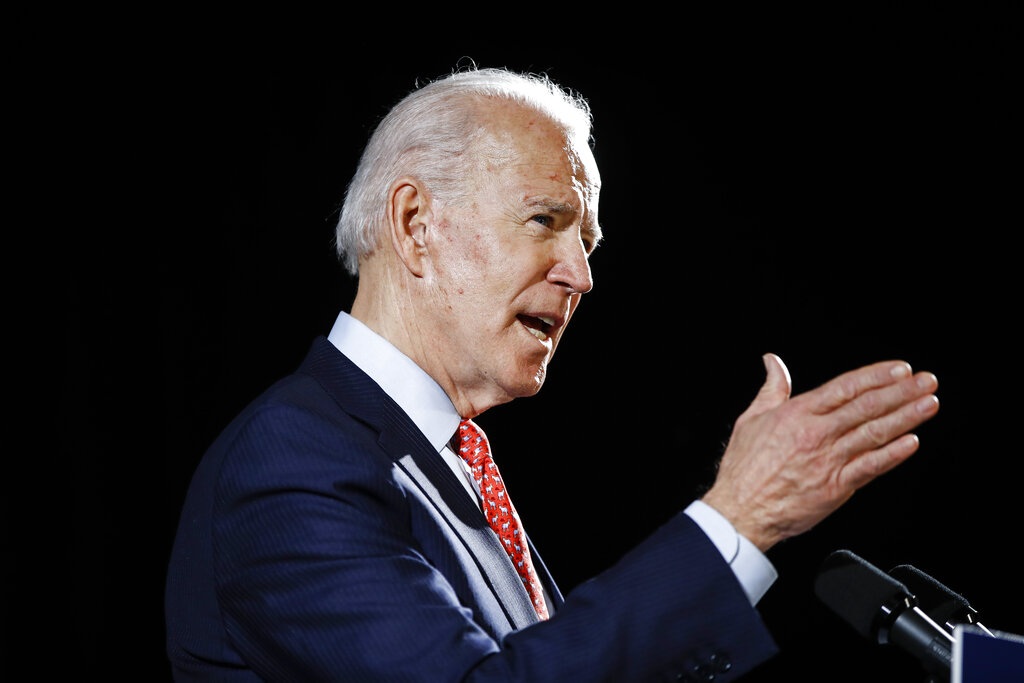 MYRNA BROWN, HOST: It’s Friday the 13th of March, 2020. Glad to have you along for today’s edition of The World and Everything in It. Good morning, I’m Myrna Brown.

BROWN: On Tuesday, Democratic frontrunner Joe Biden made a campaign stop at a Detroit auto plant. That’s where a worker questioned him about his gun control proposals. Biden fired back with an angry, profanity-laced response.

Here’s a clip of the exchange with Biden’s bad language bleeped out.

WORKER: You are actively trying to end our Second Amendment rights and take away our guns.

BASHAM: Now, John, I’ll leave the analysis of Biden’s big delegate wins to the political commentators. What I want to do is put on my Sunday School mom hat a little bit. Because I hear this and I cringe.

This wasn’t some hot mic or off-the-record moment. This was an official campaign visit. The former vice president was clearly aware that cameras—a lot of cameras—were recording him.

And lest we make this a partisan issue, I’ve heard President Trump use similar language on the public stage. And I hate it then too. I hate for my kids to hear it when the news is on and I don’t change the channel fast enough.

So my question, John, am I just being a church lady “clutching my pearls” as the hipsters say, or does this kind of stuff matter?

STONESTREET: Do the hipsters really like to say that? I’m not sure I’ve heard it.

BASHAM: I see it everywhere!

Look, I want to talk about kind of the crassness of culture, but I do want to say that although maybe the vice president remembered that there were cameras all around him, maybe he didn’t. That’s a whole other comment and a whole other topic about kind of what we’re seeing from this particular candidate. But, again, I’ll leave that to another day.

Most of the time, politics is downstream from culture. Not always. Sometimes politics is upstream from culture. In other words, there are political decisions and things pushed forward that the culture is not largely reflecting and not ready for and it drives it home. But this, in my mind, is one of the opposite examples when politics is reflecting a crassness across the culture. Now, look, we know and one of the things that I’ve been trying to say since 2016 that despite the very good things that we have seen from this president, this administration across the board, there are some things that we have seen that are telling us a lot about sort of the cultural moment we’re in and the health and well-being of our culture.

For example, Alexander Soltenitzen’s tremendous speech at Harvard University in the late 70s in which he said the sign of a decaying culture is the lack of great statesmen. And by statesmen, it’s not just somebody who can “get things done” or does the policies that we like or even think are the right ones, but someone who can actually lead. And can lead in such a way that you want people to follow.

But you kind of look across the segments of culture and we see a coarsening of everything from language in the office place, certainly what used to be considered dad’s bowling language kind of going across genders and across other activities. I’m thinking here of the number of children’s movies or movies that reflect what happens in an elementary school classroom. I’m thinking here of a movie like Wonder, which is otherwise such an amazing film, but it’s describing a teacher dropping one of those bombs in front of kids. And of course we know that’s the case when it comes to movies.

In other words, I think this is a reflection of the crassness of culture. And one of the things we’ve wrestled with is—Sarah and I have wrestled with with our own kids in terms of films that otherwise have pretty good messages that we want them to see, but trying to walk around what is the appropriate use of language.

BASHAM: Looking at media reactions, it seems like this kind of language is being considered the new red meat for campaigns. When the president calls his opponents names I can’t repeat here at his rallies, the crowd goes wild.

Biden has had similar exchanges and his supporters also seem to love it. CNN editor Chris Cilizza is saying that this incident probably helps Biden’s campaign. Not because he argued policy persuasively, but because it makes him look tough.

So if this is what tough looks like now, how can Christians—I’m thinking of Christian men in particular—show the world a different idea of tough?

STONESTREET: [Laughs] I’ll resist the urge, once again, and to comment on whether Joe Biden planned that. Yeah, whatever.

I mean, I think one of the ways is learning how language works and using it well. Carefully using words and phrasing, making arguments instead of just assertions. I do want to point out something that often gets overlooked, which is the history of the west—including America—includes political jabs and insults. But I think what you’ll see if you kind of compare today that it maybe is not a level of being nicer than what it used to be, but we’re worse at it. You kind of look Churchill’s cleverness, for example, to some of his political opponents. Or the conflict between John Adams and Jefferson and Hamilton and Aaron Burr and you kind of look back during these times—and, again, I’m kind of living in this space right now—but the insults were flying. But they were just done in a way that illustrated a deeper level of thought and clarity.

And in our culture, definitions are assumed and arguments are not made, just assertions are. And being able to divvy our way through those things I think is a way that Christian men can stand out, specifically, but also the next generation.

The outrage stemmed from Allen’s now-adult daughter Dylan Farrow accusing him of molesting her when she was a child.

Allen has always denied he did anything wrong. And Farrow’s accusations were investigated twice without any charges being filed.

So, all that to say, everything there was to know, Hachette knew when they signed a contract to publish Allen’s book.

Mega-bestselling-author Stephen King expressed his concern on Twitter. He said, “The Hachette decision to drop the Woody Allen book makes me very uneasy. It’s not him…it’s who gets muzzled next that worries me. Once you start, the next one is always easier.”

Now John, this is a messy, complicated topic. And I’m not interested in defending or accusing Woody Allen here. What I am interested in is King’s point about the chilling of speech we’re seeing in the publishing industry.

Because what King seemed not to know was that this actually been going on for awhile now. Maybe King just hadn’t noticed because the other authors aren’t nearly as famous as Woody Allen.

For example, 13 Reasons Why author Jay Asher and Maze Runner’s James Dashner were dropped by literary agents and publishers for anonymous harassment allegations.

Other authors have withdrawn books when they and their publishers were pummeled with criticism for not being woke enough. Often from other people in the book industry who admitted they hadn’t read the books.

When you read deeply into these stories, you get a clear impression that the authors’ so-called decisions to withdraw were coming from a place of fear and awareness that they weren’t going to get support from their agents or publishers if they forged ahead.

As I said, I’m not here to defend the novelists or the books, especially not 13 Reasons Why, which, as we’ve discussed, has been really damaging to teens.

But what’s your read on all this?

STONESTREET: Yeah, I’m really hesitant to throw all of these stories in the same bucket. And the reason is I think there’s a world of difference between someone who’s summarily dismissed because of a sexual abuse or a harassment allegation and someone who’s not woke enough. Those are very different things. I’m thinking here, I mean, a more interesting story to me is the several comic book writers who expressed some initial disagreement with the LGBT agenda being dismissed out of hand. That said, there’s still an issue when it comes to cancel culture, which is all it takes is an accusation. At one part it’s a really hard thing because there has been a systemic cover-up of long-term abuse in almost all the major power centers of our culture for a really long time. And when you have that sort of mess that festers and you shine the light on it, the cockroaches are going to scurry and you’re going to have—it’s just going to be messy. I’m not saying that justifies any innocent accusations whatsoever.

But at the same time, I think it’s going to be too easy for us to put the whole boat in cancel culture. And I think also the other thing that we’re seeing is just an inconsistency. I mean, actions, for example, by Vice President Joe Biden and being too touchy-feely would have eliminated CEOs from certain companies or Hollywood actors and actresses and certainly candidates on the right-hand side of the political aisle almost immediately. And so this whole thing is a big old mess. It is a big old mess. And there’s no way around it.

And I think, too, there’s no distinction being made from those who are distinctly sorry and seek forgiveness and those who don’t. And part of this, too, is what happens when bad ideas really kind of take root in our culture. I mean, all these things, I think, can be traced back at some level to what the sexual revolution has wrought. Not that there weren’t abuse or harassment things prior to that, in ages where there was a more chauvinistic culture did you not have women being the victims of men. But the sexual revolution has made it all confusing, right? Hugh Hefner’s a hero, Harvey Weinstein’s a bad guy. Women’s rights on one hand and men can claim women’s rights by the sheer power of claiming them. None of this stuff makes any sense and it’s creating a cultural context where all of this is just a big old mess.

I think one of the things that Christians have to do in order to move forward in all this is to not let blind ideology trump human dignity. And these are really tough lines to hold as we kind of consider things like due process and we consider things like hearing the accuser and recognizing there may be some structural ways in which we have suppressed the ability to face the real evils that exist in our own cultural situation.

BASHAM: I get that and I think you do well to bring up both the context of a culture of abuse and also how do we handle cultural due process, so to speak.

Well, John Stonestreet is president of the Colson Center for Christian Worldview.

John, thanks so much.