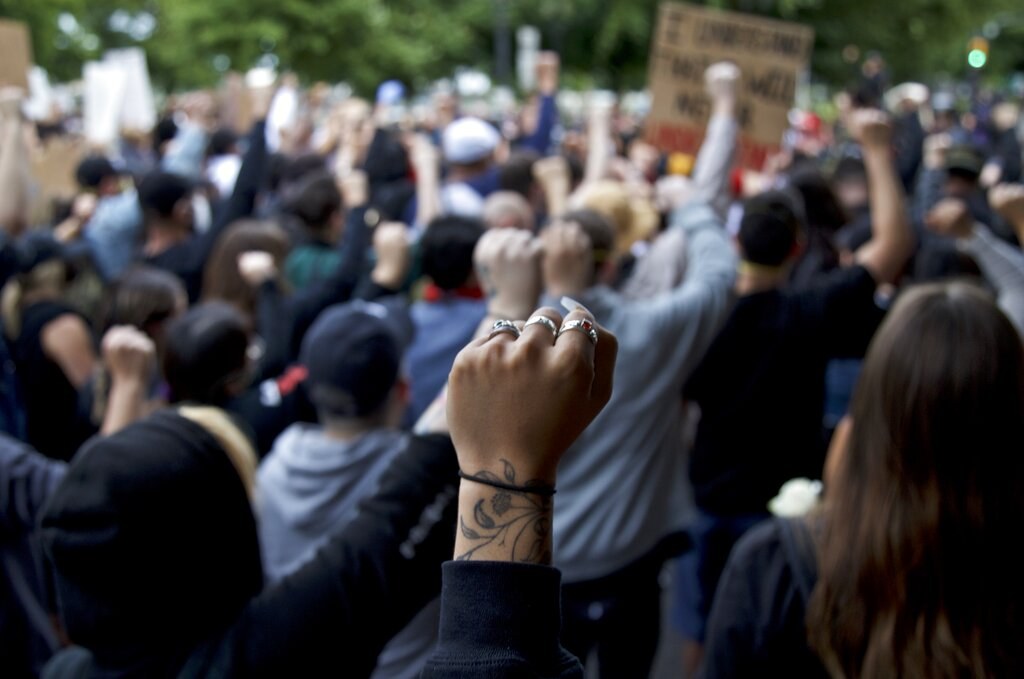 MEGAN BASHAM, HOST: It’s Friday the 6th of June, 2020. Glad to have you along for today’s edition of The World and Everything in It. Good morning, I’m Megan Basham.

NICK EICHER, HOST: And I’m Nick Eicher. Less than two weeks ago, America witnessed the death of George Floyd, an African-American man who died after a white police officer pinned him by the neck.

Protesters have taken to the streets every day since. Often marching peacefully and praying for change.

BASHAM: But the protests have also ushered in unprecedented lawlessness. Riots and looting have broken out in cities all across the country, leaving hundreds of people injured and at least 12 dead. Businesses have been destroyed. More than 9,000 people have been arrested.

Ryan is a WORLD commentator, co-founder of the pro-life group, The Radiance Foundation, and author of the book, Not Equal: Civil Rights Gone Wrong.

RYAN BOMBERGER, GUEST: Good morning. It’s great to be here with you.

EICHER: Well, Ryan, I think it’s shocking to a lot of us how quickly this situation became explosive. Maybe we shouldn’t be shocked.

But I guess the first question we have to ask, is what makes this particular episode of police misconduct so very different? Do you have some ideas on that?

BOMBERGER: I think people, rightfully, were so shocked simply by the video, by the sheer helplessness of George Floyd and what appeared to be absolutely no explanation whatsoever for him being pinned down by a knee for 7 minutes. And to hear the bystanders begging the police to stop and to do something, I think that was part of it.

So I think there are several things—a confluence of different things happening. Not to mention apparently we’re not doing coronavirus anymore. But that part, too, I think there’s a lot of pent up stuff. So there’s just this explosion. And I don’t want to dismiss the injustice of what seems to be pretty clear in that video, the injustice of George Floyd’s death. But I think some of those things add to what makes this a little different.

I’ll be honest, I look at that and it strikes me as sort of performative. Almost ritualistic.

But my guess is that it comes from people not knowing how to have real conversations about this and being afraid to say the wrong thing. Yet they want to show that they do care.

What do you make of the boxes, these social media posts, and the kneeling videos?

BOMBERGER: I know people’s hearts are in the right place for a lot of people who are doing this. And this is the problem.

See, I call myself a factivist because I believe as Christians not only do we act against injustice, but we actually have to know the facts before we act. And we live in a culture right now that would rather just act without the facts. We’re driven solely by emotions. But emotions, as we know, mislead us all the time.

So, there’s just so much pandering that goes on. There’s so many people who don’t even realize, I mean, you look at Tony Timpa, a white man in Dallas back in November 2019. He was killed by having a cop with his knee in his back for 20 minutes, but there were no riots. No hashtags. No protests.

So, for those who are blacking out their profiles and kneeling, for me, a lot of it is so symbolic because they don’t know how to have the conversation because they don’t know the context of what’s truly going on. I as a black person, I am 11 times more likely to be killed by another person of my complexion. That’s according to the FBI 2018 homicide stats. And people say, “Oh, this is not the time for facts.” Well, when is the time for the facts? When is the time to actually speak the truth so we’re not driven by an emotion that’s rooted in a lie? And for all the people doing the black boxes and the Kaepernick style kneeling, it’s not really representative of a gospel approach. There’s a lot of virtue signaling in all of this, but it’s easier to signal than to struggle with the truth.

BASHAM: You bring up “that’s not the gospel approach” and every Christian I talk to right now wants to do something to address the hurt, anger, and disunity we’re seeing. Even if there’s some disagreement on what’s fueling the division.

How do believers bring the gospel to bear on this moment? To paraphrase Ephesians 2, how do we begin to destroy the dividing wall of hostility?

BOMBERGER: Well, the only way to do that is to love. We’re told in Colossians, we’re told that love is the only thing that brings about true unity, the true bond of unity. Of course, we’re also told that God is love.

And so you cannot embrace a movement—and that’s what I’m very clear on, we need to act against injustice, but we as the church should be the ones leading. The wall that’s being put up is being put up because there’s a movement that’s being embraced that wants to divide, that wants to identify us by the color of our skin, which is completely unbiblical. We’re one human race.

I’m from a multi-racial family with Native American, Vietnamese, black, white. We are one human race. And so as Christians, we have to be careful about what we’re embracing.

Today, a hashtag is not simply just some random cry. It is specifically tied to a cause to a movement, and the Black Lives Matter movement, when you read about what their goals and objectives are, they are deeply anti-Christian. They’re pro-LGBT. They’re anti-capitalist. They’re anti-fatherhood. There’s no reconciliation. In fact, you look at BlackLivesMatter.com, you look at the Movement For Black Lives—which is M4BL.org—there is no call for reconciliation, no call for forgiveness.

So, how do we embrace a movement by chanting—it would be the same as, for instance, in the 60s, chanting black power. Martin Luther King Jr. denounced Malcolm X, denounced the black power movement. In fact, he said, “Let us not be dissatisfied until the day that no one will shout ‘white power,’ when no one will shout ‘black power,’ but we will all cry ‘God’s power’ and ‘human power.’” So, for me as a Christian, we always have to go to the only source that brings healing and brings wholeness and that can possibly bring reconciliation.

EICHER: Ryan, before we let you go, I’d like to ask you about reform ideas.

We’re hearing from political leaders on both the left and right about changes we could make to the police system. And maybe a little ray of hope here—some of those proposals, like curtailing the power of police unions and addressing qualified immunity. Some of these things overlap.

If you were in charge for the day, where would you begin?

BOMBERGER: Oh my. Thanks for the easy question. [laughs]

EICHER: OK. You get more than a day to solve it.

So, I fully support our men and women in blue who every day risk their lives to protect us. But any cop who abuses his or her power needs to be held to account. I know that the qualified immunity does present somewhat of a problem. But, then again, if you remove that, you’re going to have a police force that’s not going to want to act because if every action is then going to be something they can be sued over civilly, that becomes a dangerous thing as well.

As someone who’s been the recipient of unjust actions by police, I understand this. I understand the need for probable cause. I think there are too many times they skirt that to stop and frisk, for instance, those kinds of policies really violate our constitutional rights. I think part of it can come down to the local level. One of the things we did here with our church is we called the local police department and we had a luncheon with them. Because part of—before we even make the decisions on what to change, let’s find out who are the people who protect us. And so we had a great luncheon. We had a two and a half hour conversation finding out who they are, what they do, how they do it, and what their needs are, what some of their concerns were, and then we expressed our concerns as a community. And I think part of that is just the same that we need to apply to just everyday people in our lives. If we don’t have relationships with those that we’re interacting with, then there are always going to be problems.

But we do need to do something more to hold those accountable. And we’re seeing that. We’re seeing in South Carolina, remember when Walter Scott was shot in the back. A black man was shot in the back by police officer Michael Slager and he was sentenced to 19 years. The justice system doesn’t always work, but

In 1 Corinthians 13 it says love is patient, love is kind. The problem with some of these knee jerk sort of reactions is we’re not being patient. We’re not waiting to get all the facts. We’re not waiting to actually have these deeper conversations to figure out what truly is the problem and then how do we develop a strategy to address that problem. Instead, there’s this deep emotion that thrusts us into this and we’re being reactionary and that’s not a healthy thing.

EICHER: Well, Ryan Bomberger is a WORLD commentator, co-founder of the pro-life group, The Radiance Foundation, and author of the book, Not Equal: Civil Rights Gone Wrong.

Ryan, thank you so much. Good to talk to you.

BOMBERGER: Great to talk to you, too.

(AP Photo/Craig Mitchelldyer) A demonstrator holds up a fist in Portland, Ore., during a protest against police brutality and racism sparked by the death of George Floyd, who died May 25 after being restrained by police in Minneapolis.