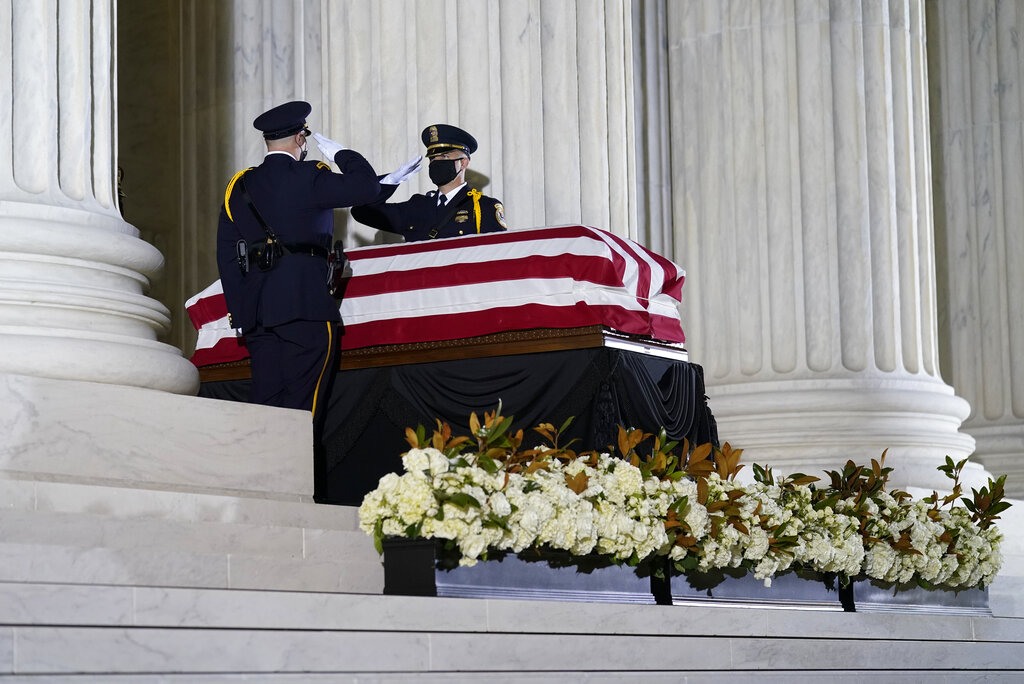 MYRNA BROWN, HOST: It’s Friday the 25th of September, 2020. Glad to have you along for today’s edition of The World and Everything in It. Good morning, I’m Myrna Brown.

What you’re hearing is the sound of pallbearers bringing the casket of Ruth Bader Ginsburg into the Supreme Court. Her body lay in repose for two days—Wednesday and Thursday—for the public and colleagues to pay their respects.

ROBERTS: Ruth’s passing weighed most heavily on her family, but the court was her family, too. This building was her home, too. Of course, she will live on in what she did to improve the law and the lives of all of us. And yet, still, Ruth is gone and we grieve.

Chief Justice John Roberts, delivering a eulogy this week for his colleague.

BROWN: Ruth Bader Ginsburg’s body will lie in state today in the U.S. Capitol—the first time the honor would go to a woman. She died a week ago today and her life represented not only a string of historic firsts, but also the political ideology of feminism.

Justice Ginsburg’s brand of feminism included unfailing support for abortion and she was one of the first nominees to the Supreme Court—if not the only—to state that so plainly.

Typically, nominees would try to conceal their views on abortion or say that it was inappropriate for a judge to speak on an issue that might come before the court.

Not so Ruth Bader Ginsburg. This is from her confirmation hearing in the summer of 1993.

GINSBURG: It is essential to women’s equality with men that her choice that she be the decision-maker. This is something central to a woman’s life, to her dignity, and when government controls that decision for her, she’s being treated as less than a fully adult human responsible for her own choices.

BASHAM: She won Senate approval 96 to 3. Virtually every Republican voted in the affirmative—one of them Senator Orrin Hatch of Utah.

HATCH: I disagree with you on a number of things, and I’m sure you disagree with me. But that isn’t the issue, is it? And frankly, I admire you. You’re earned the right, in my opinion, to be on the Supreme Court.

It is highly doubtful her successor will receive the same deference.

FEINSTEIN: You are controversial. Let’s start with that.

That’s not where Senator Diane Feinstein ended in her questioning of the woman who seems to be the front-runner to replace Ginsburg: Federal Appeals Court Judge Amy Coney Barrett. This is from a Senate confirmation hearing three years ago.

FEINSTEIN: When you read your speeches the conclusion one draws is that the dogma lives loudly within you and that’s of concern.

BROWN: Meaning, she seems committed to her faith. Barrett’s response:

BARRETT: If you’re asking whether I take my faith seriously and I’m a faithful Catholic, I am—although I would stress that my personal church affiliation or my religious belief would not bear in the discharge of my duties as a judge. It’s never appropriate for a judge to impose that judge’s personal convictions, whether they derive from faith or anywhere else on the law.

KATIE MCCOY, GUEST: Good morning, Myrna and Megan! How are you both?

BASHAM: Of course, we won’t find out until tomorrow night President Trump’s choice to fill the vacancy left by the death of Ruth Bader Ginsburg. And of course we don’t know whether it’s going to be Amy Coney Barrett, but we do know he’s committed to a female nominee.

What I think it’s safe to assume here, though, is that whomever this president chooses will represent a break from the Ginsburg 1960s and ’70s model of feminism.

The president’s nominee, when she went to law school, did not face the same obstacles Ginsburg faced, so she would’ve followed the trail Ginsburg blazed, but she took a different turn.

Isn’t that a good thing: more choice, not less, including the choice to reject a particular brand of feminism?

MCCOY: Well, you would think so, and in theory yes. The label “feminist” historically includes quite a broad swath of different beliefs. Some of the first feminists—like Susan B. Anthony—were against abortion and they simply wanted legal parity with men: the right to vote, legal protections for victims of domestic abuse, access to education. Those types of legal rights. But in the last few years, I’ve observed something really interesting. There’s this rebranding effort among self-identified feminists and they claim that the whole point of feminism from the beginning was that women would have the choice to be who and what they wanted to be.

So, if a woman wanted to be a stay at home mom, that she had the freedom to choose that. That’s really, though, a revisionist history because historically, especially second wave feminism—women who didn’t conform to that party line of what mainstream feminism was saying, they were viewed as repressed, brainwashed into participating in their own oppression, and for that you only have to look at academic women’s studies courses to see that it was an activistic type of study. It’s not really to objectively learn information. It is political in nature. So, at the risk of oversimplifying this issue, I think this all does hinge on the issue of abortion. When it comes to abortion and everything that that industry represents, mainstream feminism is almost militantly exclusionary. Think back to the Women’s March of 2017, there were so-called pro-life feminist groups that wanted to be part of it and they were excluded from even being partners because they were against abortion.

So, regarding Amy Coney Barrett, we’re already seeing the most nasty attacks. One major publication comparing her Catholic faith to the Handmaid’s Tale by Margaret Atwood. It’s not just religion in general, right? Where we see this kind of vitriol. Ruth Bader Ginsburg’s Judaism wasn’t a point of contention in her place in the court. So, it  seems it really does come down to being pro-life in general but a pro-life Christian in particular. And that vilification of the Christian faith, by the way, and its value of the unborn goes back to at least the 1950s—pre-feminism—when Simone de Beauvoir blamed Christianity for endowing the fetus with a soul. So, the fact that abortion was viewed as a moral wrong was essentially Christianity’s fault. So, pro-life Christianity has historically been incongruent with ideological feminism.

BROWN: All of us in this discussion are women who pursued paid work in the marketplace. But I want to talk a bit about the late justice Ginsburg’s place in history.

One of her law clerks wrote, “The life lessons she imparted gave me the courage to take a step back from my own career and choose for this moment in time, to be more present for my three children.”

And Christian singer/songwriter Amy Grant tweeted, “My daughters are growing up in a different world than I did. Thank you Ruth. We will keep telling your story because you inspire each of us to use our unique gifts, talents, voices to speak truth, love justice and live humbly.

Conversely, one of our listeners commented, “No matter how smart, hard working and powerful she was, by supporting abortion she did evil in the sight of the Lord.”

And then this perspective, “Even if one was bold and steadfast over her career, if her work was at the detriment of the most vulnerable in our society, that work should not be wholly celebrated or revered.”

So, when talking to your students about Justice Ginsburg and her place in history, what will you say about her?

MCCOY: I’m so glad you brought up this up, Myrna, because whether it’s the founding fathers or particular theologians and now Justice Ginsburg, we all seem very prone in our society today to summarize one’s life about one issue. Now, that’s not minimizing that one issue at all. It’s central to our values as believers—the sanctity of life—but, you know, this is where theologically I think the doctrine of common grace really helps us think through this question.

The doctrine of common grace that God gives grace to the unbeliever who is a cancer researcher to find some type of cure for cancer that benefits all of humanity, to the teacher, the university professor, the engineer, someone who contributes to society that benefits all, benefits the whole uses the mind, the spirit that God gave them for something that is good. And many of the cases, many of the issues that Ruth Bader Ginsburg was advocating for, she was bringing her intellect and skill to overturn policies and practices that were genuinely discriminatory against women. And it’s hard to believe that not too long ago, women couldn’t get a mortgage or apply for a credit card without a male co-signer. Not all states recognized marital rape as a crime. There were inequitable benefits for women in the military. A woman could lose her job if she were pregnant.

So, we can look at the disparities that had existed and appreciate Ginsburg’s work. They were genuine, legal inequities that regarded women as having fewer legal rights than men. But here’s what I would want my students to see if I were talking to them: We advocate and affirm the legal, equal rights of all people because we are all equal image bearers of our creator. And that is an inviolable dignity that we have before him and therefore our laws should reflect that. And then that dignity, though, extends to all persons, including the unborn.

You mention that quote in her Senate confirmation hearing, when she said that to outlaw abortion means that the government who’s treating women as less than fully human adults that are responsible—the irony of that, though, is how many laws do we have where the government controls, or at least stipulates, what its citizens can and can’t do through laws, right? We can’t cheat on our taxes, we can’t perjure ourselves in court, we can’t commit murder. I mean, how is that not the government treating us as less than fully human adults? So, certainly in Ginsburg’s own ruling, she imposed moral expectations on people. I think it just shows one of the many inconsistencies to pro-abortion arguments and legislation.

That being said, I think we can, I think we should appreciate the intellect and skill and contribution of a woman who recognized where something was objectively wrong and worked to correct it. And with that, we can recognize where she fell short of that, where she failed at it, and where she perpetuated an injustice against the unborn.

BASHAM: I think that’s a good note to end on. Katie McCoy is assistant professor of theology in women’s studies at Southwestern Seminary. Professor McCoy, thanks so much for being here.

MCCOY: Always great to be with you all.

(AP Photo/Andrew Harnik, Pool) A Supreme Court Honor Guard moves the flag-draped casket of Justice Ruth Bader Ginsburg back into the court as Ginsburg lies in repose under the Portico at the top of the front steps of the U.S. Supreme Court building on Wednesday, Sept. 23, 2020, in Washington.