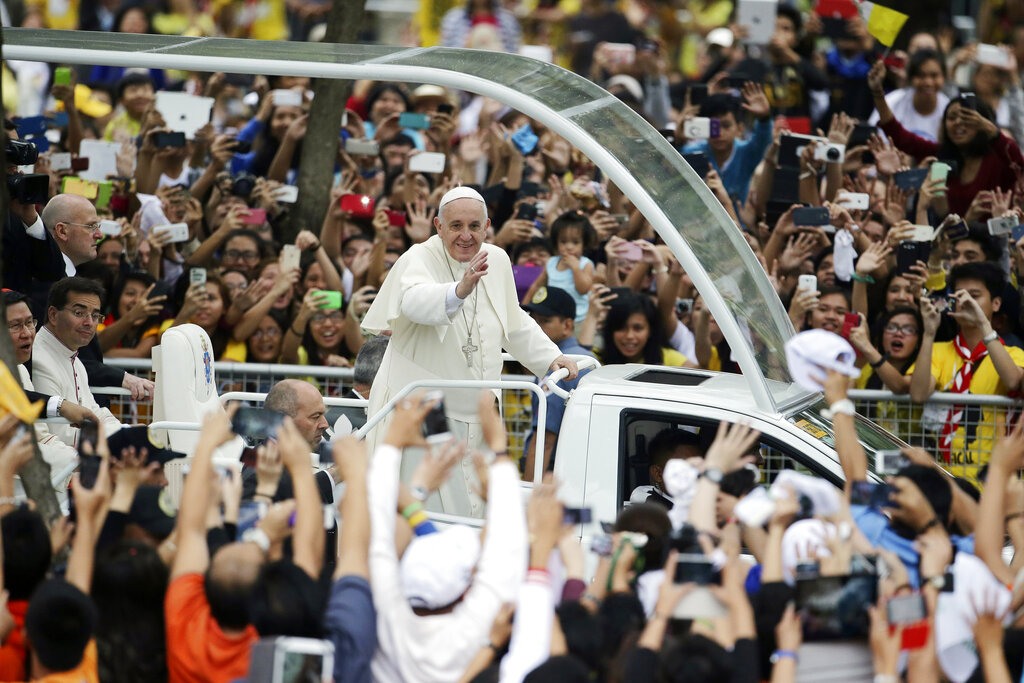 MYRNA BROWN, HOST: It’s Friday the 23rd of October, 2020. Glad to have you along for today’s edition of The World and Everything in It. Good morning, I’m Myrna Brown.

MARY REICHARD, HOST: And I’m Mary Reichard. Pope Francis grabbed headlines this week after the release of a documentary film on his life.

In it, he appears to refer to a position he took back in 2014 when he was archbishop in Argentina. Back then, he called on the government to pass a civil-union law for same-sex couples. In the documentary, the pope is quoted saying:

“They are children of God and have a right to a family. Nobody should be thrown out or be made miserable over it. What we have to create is a civil union law. That way they are legally covered. I stood up for that.”

BROWN: At the Rome Film Festival, a Russian director said he understood the pope to be calling for acceptance of homosexual people but not going so far as to be changing church doctrine. This is from a Reuters interview with the director:

AUDIO: I think that that’s what is important, that he teaching (sic) us to stop labelling and stop framing people. Allow every human being to be equal in this world.

REICHARD: One LGBT-rights group in the United States applauded the pope’s remarks as—quoting here—“a fundamental step forward at a time when LGBTQ acceptance around the world and across religions is expanding and rightfully becoming the norm.”

BROWN: It’s Culture Friday and so let’s welcome John Stonestreet. John is president of the Colson Center for Christian Worldview.

REICHARD: It’s interesting to me that the buzz is about civil unions in 2014, because the very next year, 2015, is when the Supreme Court reversed marriage laws here and firmly rejected half measures like civil unions. The court’s Obergefell decision rooted same-sex marriage in “dignity.” In other words, that only an equal right to marriage would pass legal muster from here on out. And LGBT groups absolutely reject civil unions so it seems to me what we quoted here is exactly right, the applause is for what activist groups see as a “fundamental step forward.”

What do you say?

STONESTREET: Well, I think the history here is that Pope Francis—before he was pope—used the idea of civil unions as a kind of strategic measure in order to hold back same-sex marriage and it was kind of seen as a third way or as a middle ground. And that’s what civil unions have always been within this movement. It’s always been kind of a useful place to get to. It’s kind of an incremental victory.

But it’s not a destination for LGBTQ rights groups because what I mean by “useful” is not even that it’s just an incremental step, it’s something to achieve so that from there you can further claim bigotry or discrimination. Once civil unions were allowed and civil unions were, of course, intending even for heterosexual couples to grant the same sorts of property rights and legal status for couples that aren’t officially “married,” now you could say, well, what’s the difference? Right? It’s everything but the name so it must be out of animus or bigotry. And it certainly seemed like Supreme Court justice Anthony Kennedy bought arguments similar to that one and so on.

And so the stranger thing is why this is coming out now and what’s the point? Civil unions, like you said, that’s so 2014. Who’s talked about civil unions since 2014?

BROWN: I’m not an expert on Roman Catholic theology. But I do understand marriage for Catholics is sacramental. The pope appears on a really treacherous road for any kind of long-held position the church has had on the meaning of marriage. Do you think it’s possible that the pope could go further than he has?

STONESTREET: I think that’s the question. I think that’s the question that is troubling for a lot of faithful Catholics. There’s that old joke he’s more Catholic than the pope. There’s a lot of Catholics more Catholic than the pope at this moment after that statement yesterday. But not just that statement yesterday. I mean, this isn’t a new concern with this particular pontiff.

On one level, again, I want to go back to what we know from history, which is that when he was bishop in Argentina, this pope used civil unions as a strategic measure. And that measure is based on reducing marriage down to only a sacrament. This is, in my mind, both a strength and a weakness here of this particular theological position.

On the strength position, it actually treats this as something divinely instituted, which it, of course, is. It recognizes the inherent blessedness of one image-bearer and another image-bearer coming together for life and that the actual outcome of that is going to be more image-bearers. It’s a remarkable thing that God has done in marriage. At the same time, we need to understand that marriage is God’s sacramental gift to his creation, to all image-bearers. You don’t have to be a Christian to be married. This is a natural grace that God has given. What the pope is doing is drawing this line to protect the church’s ability to do church marriage. Well, the problem with that is then the church ceases to become the institution that it has always been, pointing to marriage as a gift of God to all people. And, look, I’m not saying that every church has done that, but I think that’s what marriage has always been.

The state, obviously, is no longer in that business proclaiming to the world what God had instituted. This institution that is both pre-state and pre-church. So, if the state’s out of doing that, we don’t want the church out of doing that. So as a strategic measure to protect our territory, I’m not a fan of the civil unions approach if it’s tactical. If it’s theological, well, of course not. That’s just heretical. It’s wrong. In the Catholic situation, calling this sacramental and then going against that, that would make this in a sense heretical. I don’t think he’s gone that far. I don’t think we should think he’s gone that far at this point. But that would be a huge mistake.

REICHARD: I want to play one more piece of sound from the director of this documentary. Very interesting. Again, director Evgeny Afineevsky casting the pope’s pro-LGBT statements as an important break from tradition.

AFINEEVSKY: Because the old traditions are staying in a closet still.  And I think he, who is trying to care about every human being, he is the pro-life person, so that is my statement.

It’s a little hard to make that out, but remember the old idea of being in the closet or being out of the closet—this is very old language around homosexuality. But his point is that the pope’s statements will help homosexuals come out of the closet in more conservative societies around the world. And even more interesting is this is how the director interprets “pro-life” saying the pope’s encouraging words for the LGBT community is what makes him “the pro-life person.”

Redefining the meaning of “pro-life.”

STONESTREET: Well, in a sense I think he’s right that it will encourage more folks to come out of the closet, and I think that’s actually what’s happened in this papacy on a couple levels.

That said, the redefining of the term pro-life is just obviously a ridiculous thing. It’s gnostic, actually. And here’s what I mean by that. The problem with what we’ve done to marriage, what we’ve done to sexuality, is that we’ve removed any sort of created giveness to it from its definition, from what it actually is. And you actually hear this in churches, faithful churches as well that don’t go this far. They talk about marriage as being about companionship, marriage as being about mutual affection, commitment, and love. Everything but actually the bodies that God has given us coming together, when Jesus himself said that the two shall become one flesh. He did not say the two shall become just one. But we often in song and even in our modern liturgy and in the modern ways we talk about marriage as if it’s an emotional oneness. Well, if it’s an emotional oneness and that’s it, then there’s no reason to keep it away from same-sex couples, and that allows someone like this to use this ridiculous language.

But if marriage actually itself has to do with the becoming of one flesh and in the becoming of one flesh kickstarting a process that requires two people—a male and a female—can never be done by two males or two females and can never be done by anyone alone, and that is the physical process of procreation, which God instituted in order to allow his image-bearers to be fruitful, multiply, fill the earth, and subdue it. Then to say it’s pro-life is patently false on its head. Had we actually kept inherently throughout the early days of the sexual revolution the fundamental ties between marriage and procreation as being more than kind of a personal choice or, hey, do you want to have kids? I’m not sure I want to have kids. Instead of the God-given created design of the institution itself, then it would be a lot easier to call this what it is, which is bogus to say that an inherently sterile union could in any way be pro-life. An inherently sterile union doesn’t produce any life whatsoever.

BROWN: John Stonestreet is president of the Colson Center for Christian Worldview.

(AP Photo/Aaron Favila, File) In this Jan. 18, 2015, file photo, crowds cheer as Pope Francis passes by during his meeting with the youth at the University of Santo Tomas in Manila, Philippines.