Sin manifests itself in both, as the Derek Chauvin trial showed

On April 20, 2021, a crowd gathers where George Floyd was murdered after a guilty verdict was announced at the trial of former police Officer Derek Chauvin. Julio Cortez/Associated Press Photo 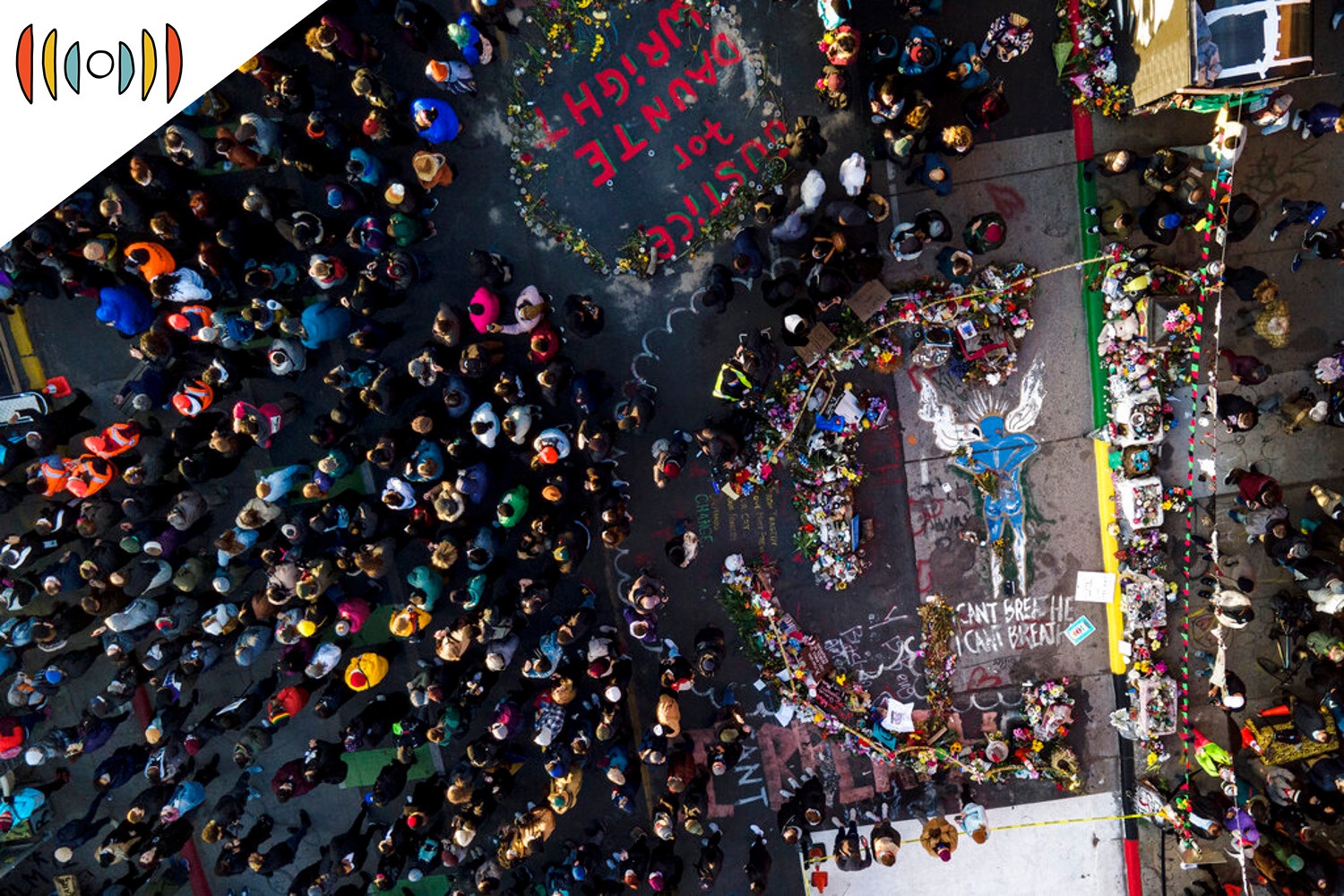 MYRNA BROWN, HOST: It’s Friday, April 23rd, 2021. Glad you’ve joined us for today’s edition of The World and Everything in It. Good morning, I’m Myrna Brown.

However, the message many national leaders offered after the verdict is that it is not enough. More must be done, they say, to address systemic racism.

HARRIS: A measure of justice isn’t the same as equal justice. This verdict brings us a step closer and, the fact is, we still have work to do. We still must reform the system.

It was a murder in the full light of day, and it ripped the blinders off for the whole world to see the systemic racism the Vice President just referred to. The systemic racism that is a stain on our nation’s soul. The knee on the neck of justice for black Americans.

BROWN: Well, it is Culture Friday and joining us now is John Stonestreet, president of the Colson Center and host of the Breakpoint podcast. John, good morning.

BROWN: So John, I think we all breathed a sigh of relief when it became clear that Tuesday night was going to be peaceful. However, it seems like we’re still going to be hearing a lot about this case, because it sounds like some leaders are still planning to use it to advance a policy agenda. Where do you see things going from here?

STONESTREET: I think we're going to hear a lot more about this case. But even more than that, we're gonna hear about the next case and the next case and the next case. In fact, the day wasn't even over before we heard about the tragic shooting of a teenage girl in a neighborhood near Columbus, Ohio. And it's another story, right, where you have a white cop and an African American person involved. And you also have tons of extenuating circumstances. So in other words, the peacefulness of Tuesday night was was really short lived. In fact, it didn't even extend through Tuesday night, you know.

And in Ohio, the problem here, there's a lot of problems here. First of all, this was an awful, awful case. When we talk about what happened with George Floyd, what happened with Derek Chauven, the, what it triggered in the United States was at a at a brand new level of intensity, and that's not going away. The other issue that we're dealing with is that we're at a place where people aren't waiting for the evidence. People are already assuming an answer, based on, you know, preconceived notions that are almost purely politically driven. And that's a devastating way to try to move forward around hardship or confusion.

Look, you know, on at face value, there was a trial. There was a jury of peers. There was a guilty verdict that was returned. I mean, in other words, the, the system did what the system is supposed to do, but that's not enough, right? People are asking this case to carry a load of weight that it just cannot do. This will not be, you know, one of the kind of the great moments, and you know, racial unification. It just won't. Because of what's happening is those putting so much weight on this case, one direction or another, are doing it with a worldview that’s simply too small.

And here's what I mean by that. Every worldview has to account for what is wrong with the world. There's one group of people looking at this and all of evil, they see as being systemic. That's the explanation for everything. On the other hand, you have people who are reacting against the overt accusation of systemic racism, in particular, for to be the explanation for almost everything, and saying, "Well, there is no such thing as systemic evil." The Scripture is really clear on this, that evil is personally caused. It's sourced in individual choices. And yet it can take on this systemic reality. It can actually infiltrate the world. And if we don't see the the capacity of sin and evil to be both of those things, we're never going to be able to look at a situation like this one or any other one, and have any sort of rational or coherent or complete or helpful analysis that can help us move forward past things. And so that's the infection, and we're seeing it now.

BROWN: You know, John, you mentioned looking at this case on its own merits, and I have to bring up Congresswoman Maxine Waters—her call for protesters to get more confrontational if a guilty verdict wasn't reached. And President Biden, though he said it after the jury was sequestered, said he hoped that they would reach the right verdict. So there was a message out there that the country would see retribution if the jury didn't reach a certain decision. In terms of how we pursue justice in this country, what kind of precedent do you think that sets?

STONESTREET: Well, look, I don't think it sets a precedent. I mean, you know, Maxine Waters and President Biden aren't the first ones to try to use some sort of political leverage or bully pulpit to, you know, add some weight onto one side of the scales of justice. I mean, this has been going on for a long time. Now listen, I think it's unwise. I think it was almost damaging to the result of the the trial. I don't think—there was actually an argument being made that particularly Congresswoman Waters’ decision to weigh in the way she did could have resulted in a mistrial. Boy, that would have been a travesty of justice to say the least. So it's certainly unwise, and it's being done in the context of two additional realities. One, it's the context of everything being seen through the lens of structural structural racism, whether or not it should be whether or not it fits into that narrative at all. So for example, there’s this incredibly terrible event that took place and the police release video of it immediately in Columbus.

And the president weighed in immediately on what it was. I mean, look, there's enough just in that video itself, to not immediately attribute this to anything structural or systemic or racist at all. There's a whole lot of details yet to come out, for example, it was just a remarkably unwise thing to do. So that's the first context, is that this is the hammer looking for a nail.

The other context of the comments from the congresswoman and from President Biden is that everything is done louder and universal in a way that wasn't even possible in times past. You know, I think it was Soren Kierkegaard of all people, Chuck Colson used to quote this all the time, who said something along the lines of, if anyone ever invented a box by which they could speak to the whole world at the same time, that person must immediately be stopped, or else they would cause an incredible amount of damage. Well, of course, that cat's way out of the bag. We've had that box for a long time. And now the box is in everybody's hand. And so that level of influence makes it very, very difficult to even imagine that something like a fair trial could be had. Or if a fair trial is had that someone won't undermine it at the last minute by saying something really foolish.

BROWN: John, shifting gears just a bit. Now I'd like to get your take on what's happening here in Georgia where I live. A group of pastors representing more than 1,000 churches is calling on a boycott of the Home Depot. Here's pastor Jamal Bryant.

BRYANT: We are calling out not just for churches, but for construction teams and demolition crews to get all of your resources, not from Home Depot. Today we’re calling for every person of conscience not only in GA but around the country to take a critical stance.

Why the boycott? To protest the new voting law Governor Brian Kemp signed last month. The faith leaders want Home Depot to do what Delta Airlines, Coca Cola, and others have done. And that is to condemn the law. And here's Governor Kemp.

KEMP: Home Depot did not ask to be in this political fight. It’s unfair to them, their families, and their livelihoods to be targeted.

Now, John, Home Depot is clearly trying to stay out of politics. The company issued a statement, all the elections should be accessible, fair, and secure, and support broad voter participation. So I have to ask, is it unreasonable for Home Depot to want to stay out of this?

STONESTREET: You know, what happens if we penalize every organization for not picking a political side, it's not unreasonable at all for Home Depot to want to stay out of this. It might be unrealistic, though, because this is the Brave New World. It dates back to 2014, when we saw the corporate world engage itself in a political or cultural war sort of issue. And it was, and since that time, we've seen how powerful corporations can be in moving the cultural needle one way or the other.

And we have had now a growing expectation that everybody has to say something. And if you don't say something, or if you don't take a stand and so on, even if it has nothing to do with you, you know, I this is a really bad place to be in. It's certainly bad for business. Um, you know, that's a problem. When politics demands of business things that it shouldn't demand of business, that's a problem as well. And you just kind of see that these lines are becoming fuzzier and blurrier and more problematic here as we go along. And it's it's not a good way to do life together. It's not good to have these expectations.

And of course, that's without even talking about the issue in this particular story, which is the Georgia voting law that Governor Kemp signed—which is, by the way, no more restrictive than laws that are in all kinds of states that have had things like mail in ballots for a long time, including Colorado. So you know, this is, you know, a tail wagging the dog sort of story, for sure. And, you know, and again, if we want to talk about unwise political statements, for the President Biden to call this the new Jim Crow was just incredibly irresponsible and vindictive and hard on business. And it does seem, though, that this is the contingency plan that corporations and businesses now need to have in place. It's kind of what it means to do business in this time in this place.

BROWN: Well, John Stonestreet is president of the Colson Center and host of the BreakPoint podcast. Thanks so much, John.