Crisis within a crisis

WORLD Radio - Crisis within a crisis

A Haitian migrant child holds up her stuffed animal so it doesn't get wet as she is carried on the shoulders of a man wading across the Rio Grande from Del Rio, Texas, to return to Ciudad Acuna, Mexico, Monday, Sept. 20, 2021, to avoid deportation. Felix Marquez/Associated Press Photo 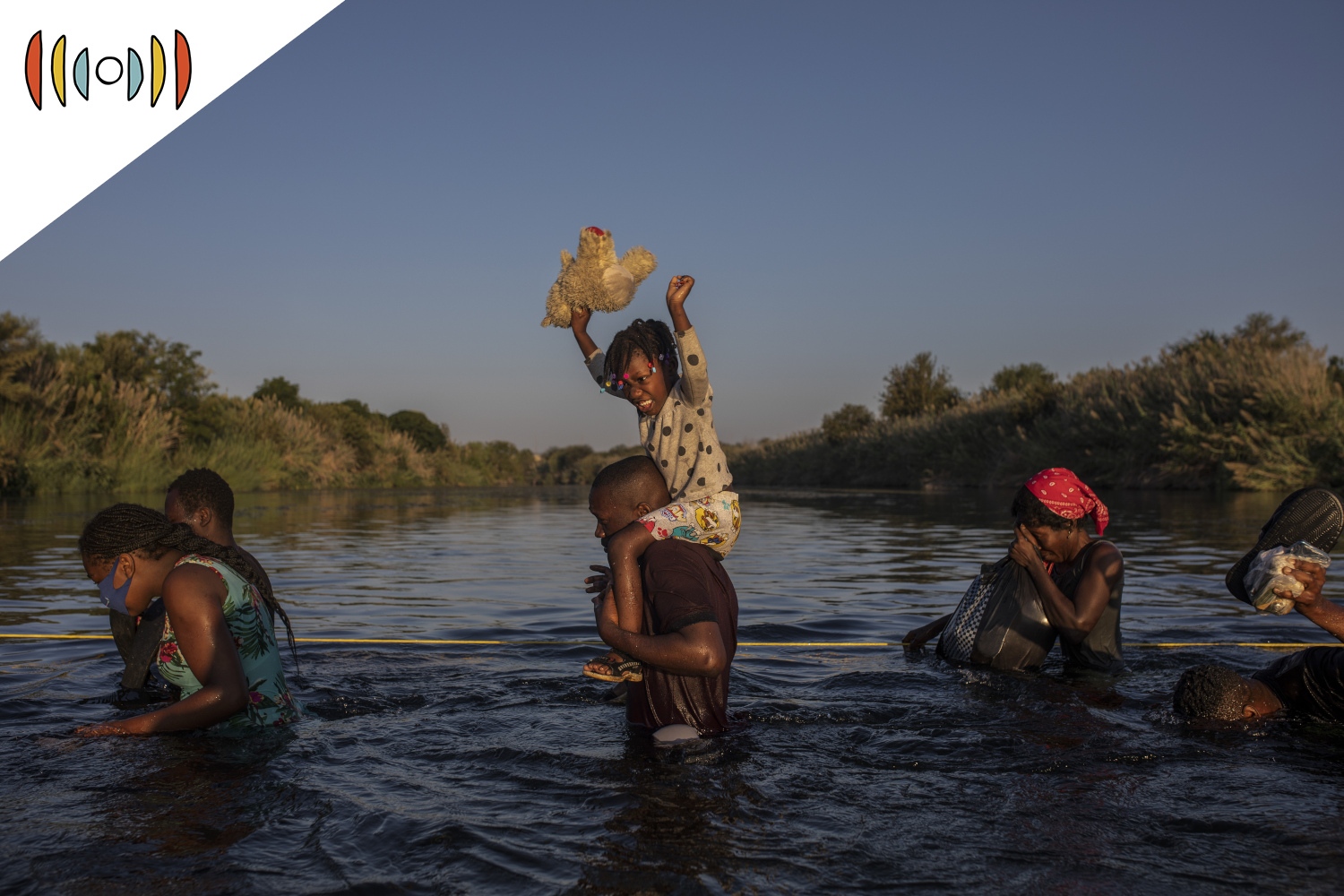 In the month of August alone, Border Patrol reported nearly 200,000 encounters with migrants on the southern border and there is no end in sight to the surge.

REICHARD: The Biden administration has avoided the word “crisis,” opting instead to call it a “challenge.” But last month, Homeland Security Secretary Alejandro Mayorkas conceded this:

MAYORKAS: We are encountering an unprecedented number of migrants in between the ports of entry at our southern border.

BUTLER: Last week, border officials were faced with a crisis within a crisis as tens of thousands of mostly Haitian migrants amassed at a border camp in Del Rio, Texas. The camp is now empty, but many Republicans and Democrats are unhappy with how the Biden administration went about clearing that camp.

REICHARD: And now more large groups, also in the tens of thousands, are reportedly gearing up to make their way to the United States.

Joining us now with more insight on the border crisis is Victor Manjarrez. He served for many years as sector chief for the U.S. Border Patrol. Today, he is Associate Director of the Center for Law and Human Behavior at the University of Texas El Paso.

Chief, welcome back and good morning!

VICTOR MANJARREZ, GUEST: Good morning and thank you very much.

REICHARD: Well we wanted to have you back on today to help us see this through the eyes of Border Patrol agents. As we mentioned, you were a sector chief for many years. You still live and work along the border, and are in contact with people within the Border Patrol.
What have you heard from agents in the Del Rio area about this Haitian migrant crisis? What was their reaction?

MANJARREZ: Well, the reaction in general has been is that they could not imagine a flow this large or a grouping this large and really for such a sustained period. It's easy to look at this group of Haitians—of course the numbers range anywhere from 12 to 18,000 people depending on the reporting agency—is to look at that as one singular event. But what we easily forget though is that they've been dealing with huge flows now since at least February. And so when this big number of again that 12-to-18,000 it’s really starting to amass, it was a little shocking just because of the sheer number.

REICHARD: Let’s talk now about the latest controversy...when images emerged online that appeared to show Border Patrol agents on horse back lashing at migrants with leather reins. Have you heard from anyone with the Border Patrol about that controversy?

MANJARREZ: Well, I have. And quite frankly, it's got many—if not all—the border patrol agents pretty upset. That photo and the way it was interpreted was not correct. To a person, they all speak about those being the split reins to actually control the horse. And even the angling in the photo, the photo did not look good. But the truth of the matter that was they're not whips. They're used to control the horses. And what I've heard from the agents in particular in Del Rio is pretty upset within the chain of command at the Department of Homeland Security and as well as with the White House, is that the kind of a rush to judgment before the facts were known. And I think what gets most of the agents is when the President said that the agents would pay while an investigation is ongoing. So they felt that the investigation has been tainted now.

REICHARD: I know Texas Gov. Greg Abbott said that no attempt was made to stop the Haitian migrants from entering the country until the Texas Department of Public Safety and the National Guard showed up with steel barriers.

Victor, did DHS instruct agents not to try to stop them from entering — to allow them to enter and make asylum claims? Or could they not stop them because they were massively outnumbered?

MANJARREZ: No, the case in Del Rio, when you look at that number, let's say that a middle number of 15,000 Haitians, and you look at Del Rio sector. Del Rio sector is 300 miles of river border. And the Del Rio sector has about 1,500 border patrol agents. And so we're already talking about a vast area to be covered by, you know, 1,500 Border Patrol agents over three shifts. And so the number even dwindles. So when you have a significant event, such as a large group of Haitians, what simply occurs is the operators on the ground have to collapse their operations to deal with the Haitians. And if you're collapsing your operations to deal with a significant event, you simply can't patrol other parts of the border. And this certainly was the case that happened in Del Rio. And so the governor's deployment of National Guardsmen and DPS troopers, he said he built a steel fence, he was really speaking in regards to the trooper vehicles. And so they're able to be placed in high visibility areas to provide some form of deterrence. Because without those troopers, without their deployment in the area, they would have been no coverage. The Del Rio Border Patrol sector simply ran out of resources.

REICHARD: Secretary Mayorkas reiterated over the weekend that the Biden administration doesn’t support the building of walls or barriers along the border.

What do Border Patrol agents think they need to do their job effectively? More walls? More vehicles? More manpower? What do they feel they need?

MANJARREZ: Well, to a person with Border Patrol agents, you know, the biggest thing they actually -- they're not even looking at the number of resources, right? Resources for a border patrol agent really is a three-legged stool. It's personnel, technical infrastructure, which could be you know, border barriers, vehicle barriers, things of that nature, and technology. And up to this point, what they've been resourced had been adequate. The biggest gripe, so to speak from agencies, is a perceived lack of support within the department at very high levels and within the White House. They really believe that the words and actions are enticing this flow to continue at a very high rate. And so that's really the number one concern of most Border Patrol agents is the perceived lack of support.

REICHARD: Victor Manjarrez with the University of Texas El Paso has been our guest. Chief, always informative to hear from you. Thanks so much!

MANJARREZ: Thank you very much.