Tyrone Polk minds the grill on one of two mobile barbecue trailers parked outside the Uvalde Civic Center Thursday, May 26. Photo by Bonnie Pritchett 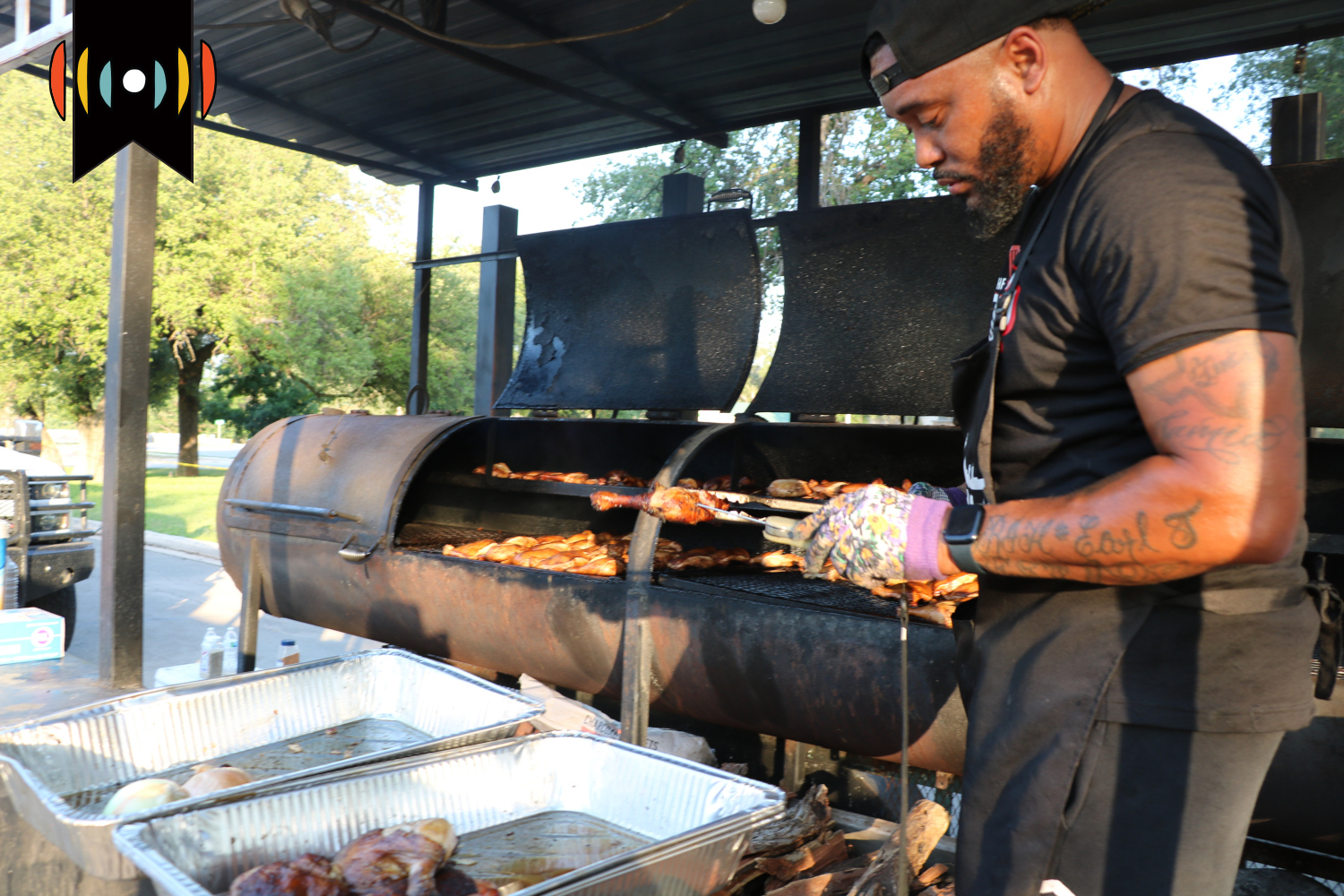 PAUL BUTLER, HOST: Today is Thursday, July 7th. Thank you for turning to WORLD Radio to help start your day.

MYRNA BROWN, HOST: And I’m Myrna Brown. Coming next on The World and Everything in It: comfort food.

In May scores of people offering aid descended on Uvalde, Texas in the wake of the school shooting there. Among them were those offering food as comfort—much of it barbecue. They fed the families of the victims, first responders, and the town shrouded in grief.

BUTLER: While covering the tragic circumstances in Uvalde, WORLD reporter Bonnie Pritchett asked the grill masters why they came. Here’s what she found out.

REPORTER, BONNIE PRITCHETT: If love had an aroma, it might smell like barbecued chicken leg quarters—served with generous sides. Or pulled pork sandwiches—enough to feed several hundred people.

In the days immediately following the deadly shooting that left Uvalde residents stunned, love was dished onto countless Styrofoam plates and covered with foil and prayer.

Clifford Archer was among those rolling into town with his barbecue trailer in tow. He came offering comfort the best way he knew how.

Archer sat with fellow barbecue enthusiast Laura Davis in the parking lot of Templo Cristiano Tree City Church as his two 55-gallon barrel smokers slowly transformed pounds of pork roast into dinner. The pair usually compete against each other in barbecue cooking contests across the state. Not this time. This was a team effort.

ARCHER: So, for lunch, we were able to get out 44 plates of pork tenderloin, green beans mashed taters. And for dinner, we're going to do pulled pork, country beans, corn and bread. But tomorrow, it's going to be a smorgasbord…

Archer asked his fellow competitors to join him in Uvalde.

ARCHER: These are families and individuals that are going to go to HEB tonight, load up on meats and sides and whatnot. And they're gonna drive all the way down here, cook meals and serve them. I've told all the teams that are coming down, cook whatever is on your heart, whatever you can afford, and just come love…

They did come. The cook-off competitors grilled and smoked enough meat to feed 800 people, including families whose children died in the school. Plenty of leftovers were frozen for future distribution.

The human impulse to comfort the grieving is a testimony to God’s grace. That comfort is often offered as a meal.

GIVLER: I think it's biblical. We, our response to [a] suffering person is to try to meet their needs as this as those people did, so many people who poured into Uvalde were doing…

That’s Amy Givler, a family physician at an indigent care hospital in Monroe, Louisiana. She said offering meals to grief-stricken people is not just loving—but necessary.

GIVLER: What happens in the time of crisis is so often not eating, you know. The last thing you think you can spend the time doing is to prepare a meal…

So, Cubit and his friend Tyrone Polk and their families loaded the portable wood-fired grill and a food truck and drove 85 miles west from San Antonio to Uvalde. The men own separate barbecue restaurants, but for years have cooked together to feed the city’s homeless.

For these families, cooking for others is more than a business. Valerie Polk explains.

VALERIE POLK: It definitely is a ministry. Because, you know, bringing people together to eat together as one at the table is a ministry in itself. Once you give people the food, they will sit in eat and talk…

Some Uvalde residents expressed gratitude and shared their stories. Others had no words.

VALERIE POLK: We had several people get their plates and just walk away from the line and begin to cry. You could see tears fall in several of them. We requested prayer for them and prayer was given.

Pastor Russel Howelton prayed with several Uvalde residents. He’s pastor of Skybridge Community Church in San Antonio and often accompanies the pit masters when they serve outside their restaurants. He prayed with first responders shaken by what they witnessed inside the school. And a father whose daughter was injured inside the classroom where her friends were killed.

RUSSELL HOWELTON: By faith, we’ve got to pray. But after prayer, we have to do something as a church. I was blessed to be able to get the phone numbers of several people here, so that they would know it's not gonna be a one and done in the sense that we ministered to you today and we forget about you tomorrow. They're still hurting. And we got to let them know that they're not hurting by themselves.

Those reminders will come in phone calls, prayers and deliveries of leftover meat by members of Templo Cristiano Tree City Church.

And at the end of a long hot evening of grilling and serving almost 2000 plates of barbecue, Tyrone Polk is exhausted and grateful.

TYRONE POLK: It means a lot. Um, yeah, everything really because just to see a tragedy happen, and you're here with food and just help, able to help them smile and, and get it off their minds for a few minutes. It's it's really life changing for us. It's the simple things.