Excerpts from speeches world leaders made immediately after 9/11

In this Sept. 14, 2001 file photo, President George W. Bush puts his arm around firefighter Bob Beckwith while standing in front of the World Trade Center in New York during a tour of the devastation Doug Mills/Associated Press Photo 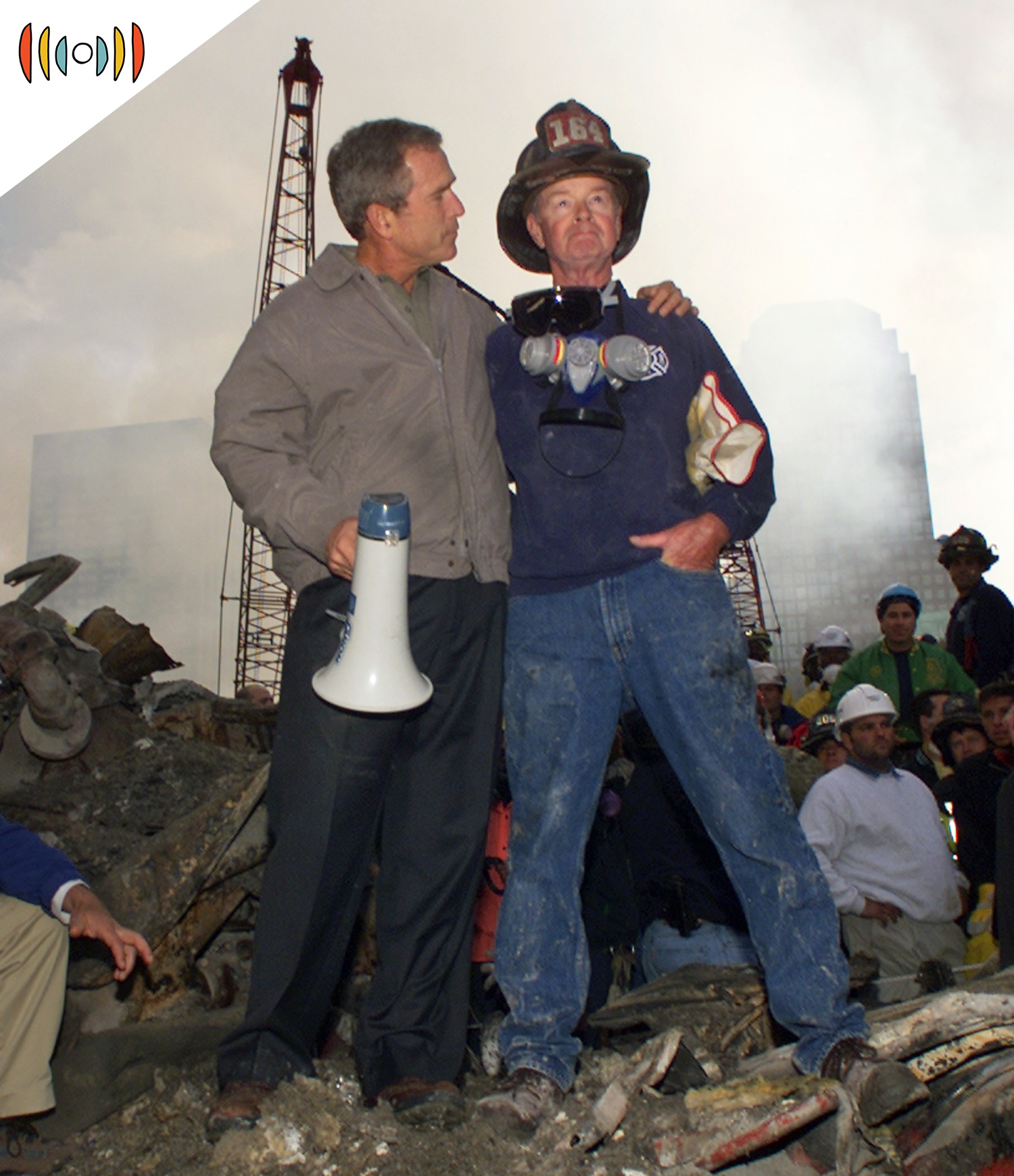 NICK EICHER, HOST: Today is Thursday, September 9th. Thank you for turning to WORLD Radio to help start your day.

Coming next on The World and Everything in It: notable speeches past and present.

Throughout this week, we’ve commemorated the 20th anniversary of the 9/11 attacks. Today, we return to the hours and days afterward to hear reactions from world leaders of the time.

We’ll end with President George W. Bush’s final remarks from the 9/11 National Day of Prayer and Remembrance service. We now present portions of those addresses without further comment.

KOFI ANNAN, UN SECRETARY GENERAL: ​​We are all traumatized by this terrible tragedy. We do not yet know how many people have been killed or injured. But inevitably, the number will be high. Our first thoughts and prayers must be for them and for their families. I wish to express my profound condolences to them, and to the people and government of the United States. There can be no doubt that these attacks are deliberate acts of terrorism, carefully planned and coordinated. And as such I condemned them utterly. Terrorism must be fought resolutely, wherever it appears. In such moments, cool and reasoned judgment are more essential than ever. We do not know yet. Who is behind these acts, or what objective they hope to achieve. What we do know is that no just cause can be advanced by terror.

TONY BLAIR, BRITISH PRIME MINISTER: It is hard even to contemplate the utter carnage and terror which has engulfed so many innocent people. We've offered President Bush and the American people our solidarity, our profound sympathy, and our prayers. As for those that carried out these attacks, there are no adequate words of condemnation. This mass terrorism is the new evil in our world. The people who perpetrate it have no regard whatsoever for the sanctity or value of human life. And we, the democracies of the world, must come together, to defeat it and eradicate it. This is not a battle between the United States of America and terrorism, but between the free and democratic world and terrorism. We therefore here in Britain, stand shoulder to shoulder with our American friends in this hour of tragedy, and we, like them, will not rest until this evil is driven from our world.

[TRANSLATION] This morning we heard the terrible news about the series of terrorist attacks in the United States, which have left a trail of great destruction. Mexico expresses to the people and government of the United States its solidarity and deepest condolences for the irreparable human losses. We also express our strongest condemnation of these attacks. I have conveyed to President George Bush our feelings of sorrow and our solidarity at such a difficult time.

ARIEL SHARON, ISRAEL PRIME MINISTER: The fight against terror is an international struggle of the free world, against the forces of darkness, who seek to destroy our liberty and our way of life. I believe that together we can defeat these forces of evil. In this most difficult hour all Israelis stand as one with the American people. Our hearts are with you. And we are ready to provide any assistance at any time. The Government of Israel has declared a Day of Mourning tomorrow as we bow our heads in share in the soul of the American people.

GEORGE W. BUSH, US PRESIDENT: They have attacked America because we are freedom’s home and defender. And the commitment of our fathers is now the calling of our time. On this National Day of Prayer and Remembrance we ask Almighty God To watch over our nation, and grant his patience and resolve, and all that is to come. We pray that he will comfort and console those who now walk in sorrow. We thank him for each life, we now must mourn and the promise of a life to come. As we've been assured, neither death, nor life, nor angels, nor principalities, nor powers, nor things present, nor things to come, nor height nor depth, can separate us from God's love. May He bless the souls of the departed. May He comfort our own and may He always guide our country. God bless America.