Legal fallout a year after the Jan. 6 riot on Capitol Hill

Supporters of President Donald Trump climb the west wall of the the U.S. Capitol in Washington as they try to storm the building on Jan. 6, 2021, while inside Congress prepared to affirm President-elect Joe Biden's election victory. Jose Luis Magana/Associated Press Photo 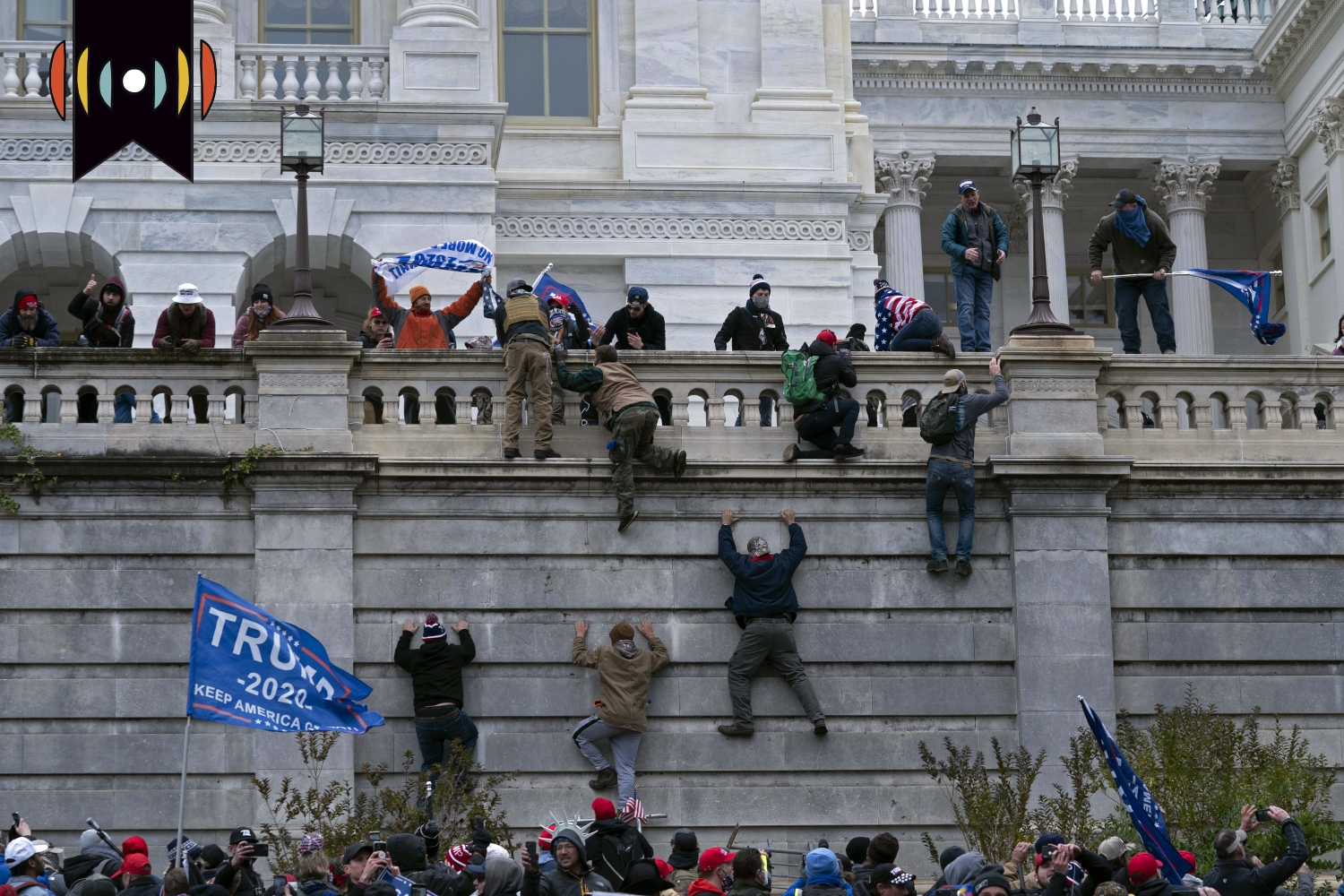 MARY REICHARD, HOST: Coming up next on The World and Everything in It: the ramifications of the Capitol riot a year later.

One year ago today, a Capitol Police officer issued this warning to lawmakers in the House chamber.

OFFICER: Get down under your chairs if necessary, so we have folks entering the rotunda and coming down this way. So we’ll update you as soon as we can, but just be prepared. Stay calm.

BROWN: Outside, pro-Trump demonstrators protested. They believed Democrats stole the election. This just as Congress convened to certify electoral votes.

Most protesters were peaceful, but some were not. And as hundreds stormed the Capitol, five people died in the chaos.

In the 12 months since, Congress has conducted multiple investigations, including an ongoing probe by a House select committee.

REICHARD: Here now to discuss the fallout one year later is Marc Clauson. He is a professor of History and Law at Cedarville University in Ohio. Professor, good morning!

MARC CLAUSON, GUEST: Hello. How are you today?

REICHARD: Doing well and glad to have you. Well, let’s start with the criminal cases. What charges have we seen against the people involved in the riot up to this point?

CLAUSON: Well, it’s a pretty broad range as you'd probably expect. You have trespassing, trespassing on government property, you have assault, battery. In some cases you have attempted attempted murder, a whole range of charges.

REICHARD: You know I’ve seen reports about people held without charges all this time. Marc, what do you make of those reports? And how many people are we talking about if it’s true?

CLAUSON: Yeah, it's not many. It's probably three or four that we've heard reports of. Now, there could be more, but it does present a problem. And this is not the first time this has happened. But it's a bit disturbing coming from the federal government, the Justice Department, and it has happened, like I say. People can be held up to a certain time period and even beyond that time period without having formal charges made against them. And that just kind of means you keep them there in the jail or the prison until you're ready to do something. Now, in fairness, they are getting lawyers now to say something on their behalf and to go to courts to try to deal with this. And in at least one case a court has intervened in that case and said, “Look, you got to do something about this. You can't just keep people indefinitely, because we have a right to a speedy trial.” So it's an issue, but it's not a big issue at this point. But I think it could have the potential for being bigger in the future.

REICHARD: Now I know some of the defendants made pretty quick plea deals. Do you have an idea of how many people chose to plead guilty rather than go to trial? And does that tell us anything about how strong the prosecution’s cases are?

CLAUSON: Yeah, the first thing to note is there haven't been too many to make plea deals thus far. And normally that would tell you that the cases they think—at least their lawyers do—the cases against them are rather weak. And the reason they tend to be weak, in most cases, is because they've been overcharged. They're charged with something more than that actually fits their behavior. For example, if somebody trespassed and they got charged with attempted murder just for being on the property or treason or insurrection or something like that, then that's an overcharge. And you can't prove it. And the lawyers know you can't prove that. You can't convince a jury that that's the case or a judge that that's the case. So those would be the ones that you would say, “No, I don't want to plea deal.” However, on the other side of that coin, the government uses those things against people often to get them to enter into the plea deals. And you don't know with certainty what could happen. So they overcharge in order to get you to come to their side and enter into the plea deal. But there haven't been too many yet, which indicates to me that the charges in many cases have been a little too far.

REICHARD: Mm-mm. Maneuvering going on there. So that’s the criminal side of things. What about the civil cases? So far, we see, what, eight lawsuits by police officers against former President Trump. Two just filed this week. What are those legal arguments?

CLAUSON: They're obviously tort kinds of argument. Well, tort would be a civil wrong against somebody. It would be assault or something like this. Now, in this case, there's a disconnect, which makes it harder to prove, right, obviously, in court. They're making an argument that somehow or other, Donald Trump was connected to what happened to them. He caused them emotional harm, he caused them physical harm, indirectly, by the words he used. And so he can be complicit as well as the other people who are directly charged. And this is not an uncommon kind of case to bring in the civil realm. However, it's much more difficult to prove. You've got to prove that there's a direct connection between what he said—or didn't say—and what happened. And there has to be a strong direct connection. And that's very difficult to prove with the factual situations in these cases.

REICHARD: Let’s talk about the probe by the House Select Committee now. Most Republicans have charged that this is just a lot of political theater. Democrats counter that the GOP is trying to whitewash the incident. But let’s just put the political battle aside and talk nuts and bolts here. What, specifically now, is the committee investigating? What’s it looking for?

CLAUSON: Well, that's actually two questions. On the one hand, what are they investigating? On the other hand, what are they actually looking for? Now, the first question I would answer, they want to find out exactly what happened. They want to get the facts. They want to find out whether this is truly an insurrection that was planned in any way, had planning going on behind it that led to the actual breaking into the capital and so forth. Or whether it was just a spontaneous riot of some kind that really doesn't have anything to do with trying to bring the republic down or anything like that. Now, to actually get to that point, you've got to have the facts of what happened. That's what they want to do on the one level. On the other level, this is where it becomes impossible to separate out the politics from it. That committee has clearly been established by the Democratic leadership in order to find something against Donald Trump and against other conservatives, who they think may have been involved in this in some way, advisers to Trump, officials in the Trump administration, and so forth. So on the one hand, it's supposed to be a nonpartisan gathering of facts. On the other hand, it is clearly also political as any congressional committee is bound to fall into at some level. That's just impossible to escape.

REICHARD: Professor Marc Clauson with Cedarville University has been our guest. Professor, thanks so much!