Supporters wave flags on an overpass in Kanata, Ontario, Canada, as a trucker convoy making it's way to Parliament Hill in Ottawa to participate in a cross-country truck convoy to protest the government's COVID mandates. Frank Gunn/The Canadian Press via Associated Press 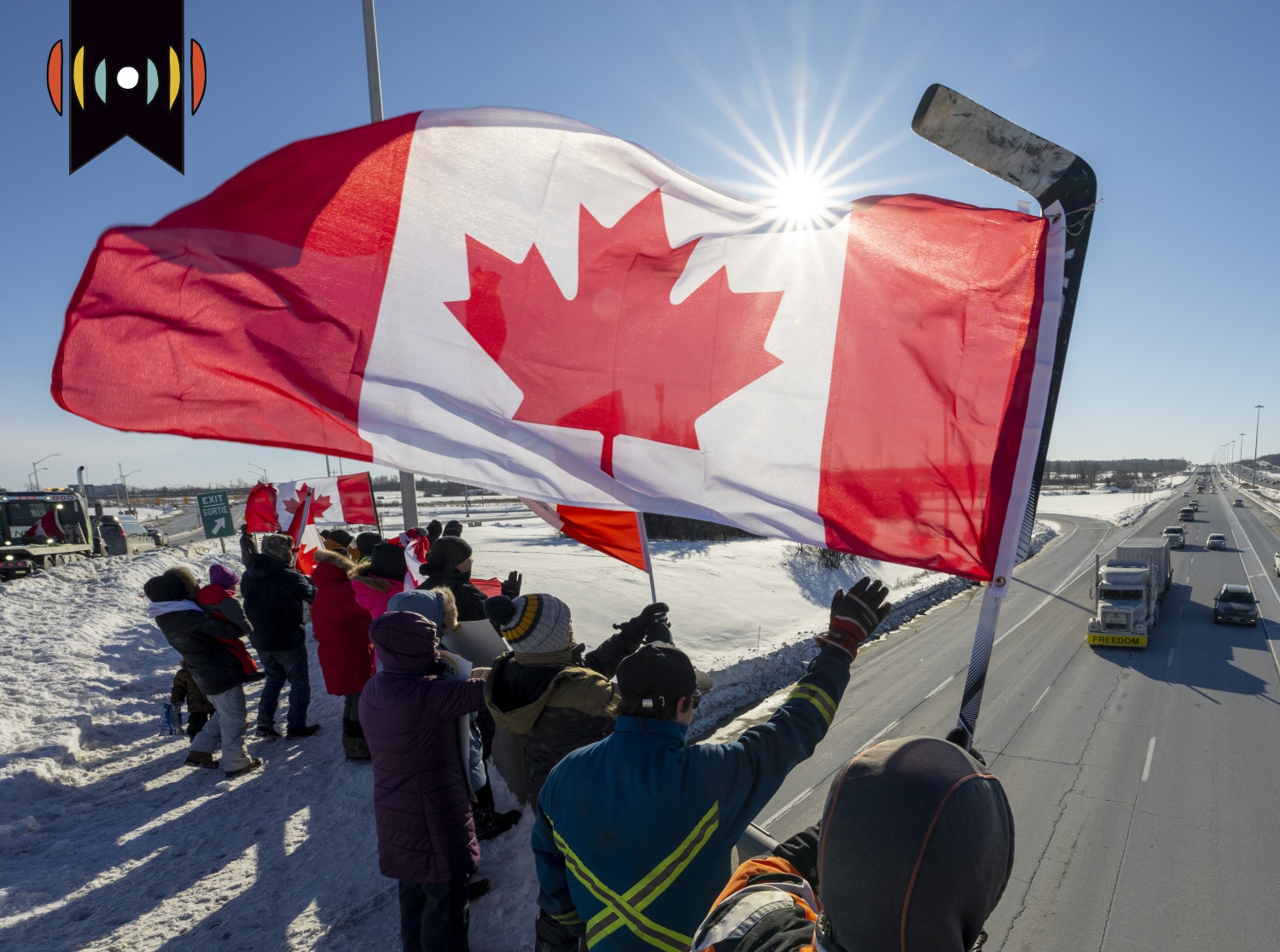 NICK EICHER, HOST: Up next: the battle over COVID-19 restrictions and freedom of speech in Canada.

The capital city, Ottawa, declared a state of emergency this week as protests continue in the streets.

Thousands of protesters and more than 500 trucks and vehicles have descended on downtown Ottawa in what is being called the “Freedom Convoy.” They’re demonstrating against vaccine mandates and other restrictions on truck drivers—demonstrations that include loud, blaring horns and disruption of traffic, what the city’s police chief calls a “siege” that he cannot manage.

MARY REICHARD, HOST: But some say the government and law enforcement are going too far in their policing of the demonstrations, infringing on the rights of protesters.

The Justice Center for Constitutional Freedom is mounting legal challenges to what it calls government overreach.

Joining us now to talk about this is Allison Pejovic. She is a lawyer with the Justice Center, and she joins us now. Allison, good morning!

REICHARD: We’ll get to the protests in just a moment. But as we mentioned, the vaccine mandates for truck drivers sparked this movement in the first place. What exactly does the government require?

PEJOVIC: Well, it requires any Canadian truck drivers who are re-entering Canada from the U.S. to be double vaccinated. And if they're not, they have to go into quarantine which causes problems for them being in quarantine for two weeks, and it's very difficult for them to work. And of course, you guys have got a similar mandate as well—Canadian truckers who are not vaccinated can't cross the border south. So we've got issues on both sides of the border.

REICHARD: Ottawa police have arrested I think seven people and fined more than 100 people in what it called “demonstration-related enforcement.” It sounds like at least some of the arrests were justified … for property damage and things like that. But what restrictions are police placing on protesters that you believe do cross the line?

PEJOVIC: Well, I mean, right now they've started to seize fuel for the truckers and in Canada, it's very cold. And the truckers are using this fuel that people are kindly bringing in for them to keep warm. They sleep in the top of their trucks and they need that at nighttime to keep warm. And the police are now confiscating all fuel that they can find. So that's extreme government overreach to now start fining anyone or arresting people for assisting with this protest. And of course, the protest is protected under Canada's constitution. We have the Charter of Rights and Freedoms and section two protects their rights to freedom of expression and freedom of peaceful assembly.

REICHARD: You mentioned earlier protections for speech under the Canadian Constitution. What is your legal argument here that these enforcement measures violate the rights of these protesters?

PEJOVIC: Well, really, what we're going to be doing is bringing a legal challenge to the overall mandate, and the vaccine mandate for the truckers and that it violates their right to bodily autonomy, violates their right to privacy—those are protected rights under the charter. So the bigger picture here is the mandate. In terms of the protest itself and any government measures that interfere with a peaceful protest is a violation of the right to assemble peacefully under the charter and to express themselves. And under the legal test, the government has to show demonstrable evidence proving why it's necessary to get rid of and infringe on these peaceful protests. So there's a legal test there that has to be met. And so, you know, we've had many protests in Canada that the government has sort of let go on like Black Lives Matter and indigenous people sometimes will have protested on railways in Canada. But, you know, we've got some very hardworking truckers here in Ottawa and the government is really coming down hard on them and calling them violent when I can tell you—I was on the ground in Ottawa this weekend—there's no violence. There are people playing hockey. There are little kids in bouncy castles. The vibe there is one of love and happiness and being together and people are fighting for freedom and that's really what's going on on the ground. The claim that this is dangerous and violent, it's just not. There's no evidence of that, and no evidence has been provided of that.

REICHARD: Allison, speaking more broadly about COVID restrictions in Canada, can give us an overview of what restrictions remain in your country and which of those is the Justice Centre involved in challenging?

PEJOVIC: Right now, I mean, we've had lockdowns pretty constantly throughout for the last two years. The government brings some freedoms back and lifts some restrictions. And then, you know, months later brings them back in. I know, in the U.S,. you have different states doing different things. And some states are wide open, like Texas and Florida. And some states are locked down pretty hard like California and New York. But in Canada, it's been uniform pretty much across the whole country with, you know, minor differences. But we've been locked down where, you know, in Ontario restaurants were closed recently, they’re just starting to reopen.

It's really the vaccinated versus the unvaccinated. Vaccinated people can go into church with no restrictions, they can go into restaurants with no restrictions where restaurants are open, and the unvaccinated in most of the country if not all of the country, they they're not allowed to go to restaurants, go to gyms, get on an airplane. So because Canada is connected to the United States, but no other country by land, if Canadians want to leave the country, because President Biden has the mandate at the land border, any unvaccinated person who wants to leave the country can't drive south, even if they want to go to Mexico, they can't drive south. And they can't get on a plane because now you need a vaccination proof to get on a plane. And they can't get on a boat because that's also been prohibited. So they can't leave the country. And that's very troubling. So our legal team has launched a very important legal challenge to the federal vaccine mandate for travelers. And it's really critical that we win that one because again, as I said, Canadians who are unvaccinated are now prisoners in their own country.

REICHARD: Final question here, Allison: do you think the protest in Ottawa is a reflection of the attitude of a large part of Canadian society? Are Canadians really getting sick and tired of the government’s approach to COVID?

PEJOVIC: You know, it's an interesting question because this protest started with the convoy coming from British Columbia traveling through our main number one highway, which goes through the main cities across Canada. And as soon as the convoy started to pass through the major cities going eastward to Ottawa, all of these people, supporters came out of nowhere. And I think what happened was there were people who were quietly supporting freedoms and were against the mandates, whether they were vaccinated or not, and they came out and were visible. And when people become visible, other people join them. And it just became this movement where it's now okay to come out and say I actually support the truckers and what they're standing for. And then you have the poll coming out that 54 percent of Canadians are not actually in favor of these mandates anymore and these restrictions. So that was a big change. So we can see the majority of Canadians are tired of this and they want it to end.

REICHARD: Allison Pejovic has been our guest. Allison, thanks so much!

PEJOVIC: Thank you so much. Take care.