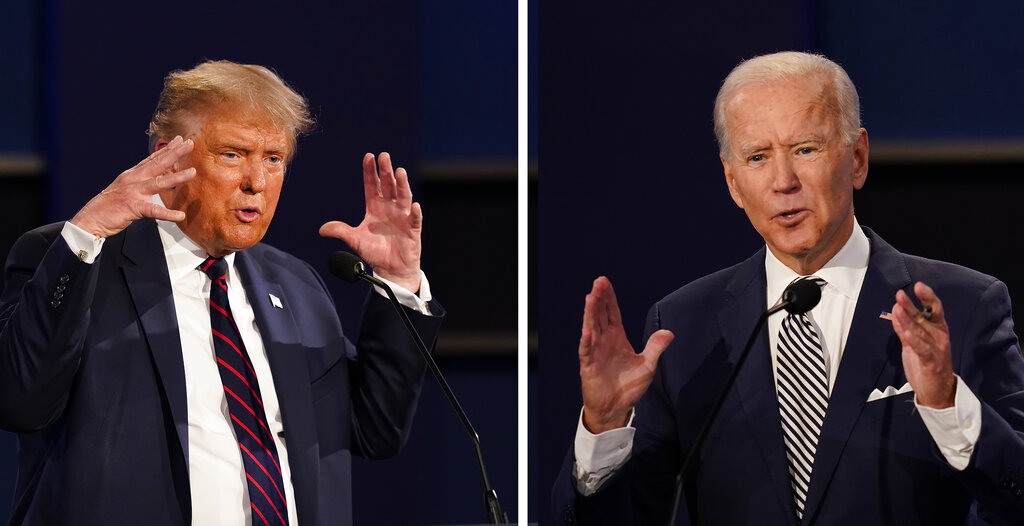 MARY REICHARD, HOST: Today is Thursday, October 22nd. Good morning! This is The World and Everything in It from listener-supported WORLD Radio. I’m Mary Reichard.

CAL THOMAS, COMMENTATOR: The supposedly nonpartisan Commission on Presidential Debates has selected the following topics for tonight’s final encounter between President Trump and Joe Biden: “Fighting COVID-19,” “American Families,” “Race in America,” “Climate Change,” “National Security,” and “Leadership.” The commission also announced it will mute the microphone of the candidate who is not talking. The president opposes that rule, but it could be to his advantage since the more Biden talks the less clear he becomes.

But are these topics priorities for most voters? Not according to the Pew Research Center. Nearly eight in 10 registered voters say the economy is their number one issue, followed by health care, Supreme Court appointments, the virus, and foreign policy. Race and ethnic inequality come in at number eight and climate change ranks next to last.

Voters should be allowed to select the topics of greatest concern to them, not political elites who are likely still getting their paychecks while many Americans have lost jobs.

“Race in America” is too broad a topic. The president might say that Biden and other Democrats have not fixed the racial divide yet. Biden’s held elected offices for 47 years! Why should he be expected to do better if he becomes president? After all, he opposes school choice, which would open the door to a better future for disadvantaged children trapped in failing public schools.

Trump clearly enjoys an advantage in the “National Security” category. He has brokered a deal between the United Arab Emirates, Bahrain and Israel. He is ending America’s involvement in foreign wars. He has imposed serious sanctions on Iran. He has also made European nations pay more for their own defense.

As for leadership, I assume that will give Biden an opportunity to claim he can “bring us together.” What does that mean? Does it mean Republicans must abandon their beliefs? Better to win the argument over whose ideas work and whose have not than to embrace a group hug. The president should take advantage of this topic to say what the next four years would look like, especially with a Republican Congress, should he win re-election.

The preparations for tonight’s debate clearly show the debate commission is ready for retirement. It is 60 years old and has exceeded its sell-by date.

Instead, the candidates themselves should drive the debates. They should each get 30 minutes to outline and explain their ideas. They could then question each other. If we must have moderators, let each candidate pick one, not the commission.

The political elites and insiders are still running too much of our political system. The public would be better served if we adopted serious reforms in how we elect presidents. That should be the goal.