Embarkation of the Pilgrims Illustration/Encyclopædia Britannica 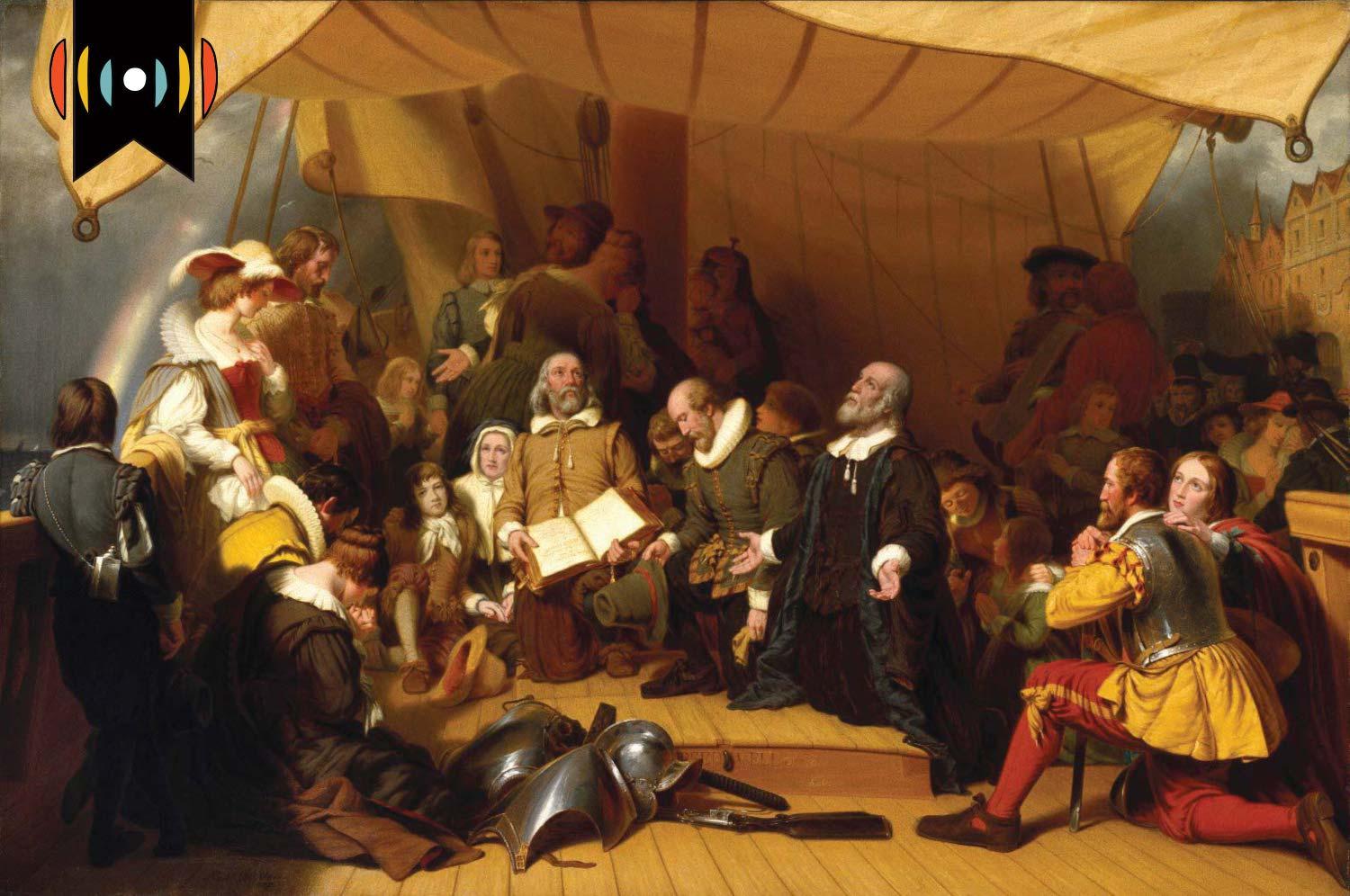 MYRNA BROWN, HOST: And I’m Myrna Brown. Coming next on The World and Everything in It: getting to know a pilgrim father.

William Bradford is one of the most famous Pilgrims and for good reason. He served as governor of Plymouth colony for more than 30 years. And most of what we know about Pilgrims and the first Thanksgiving comes from his book, titled: Of Plymouth Plantation.

REICHARD: One descendant of Bradford says there’s even more to the man than most of us know. And he’s spending his retirement spreading the word. WORLD Special Correspondent Sarah Schweinsberg has his story.

SARAH SCHWEINSBERG, REPORTER: It's a rainy, October day in Plymouth, Massachusetts. A couple dozen people file into a church gym where a pulpit has been set up under a basketball hoop. Visitors sit in folding chairs. They’ve come to watch a presentation about William Bradford.

A tall man with white hair and a quick smile walks to the front. He looks like he’s stepped straight out of a painting of the first Thanksgiving. He’s wearing a black waistcoat with shiny buttons, a cape, and knickers with tall socks. His black leather shoes clack on the wooden gym floor.

This is David Bradford. A 12th generational descendant of William Bradford.

BRADFORD: My mission, I'm David Bradford. I've always wanted to share, to be his mouthpiece, wanting to really share directly his words and his history without being any kind of a filter. I just wanted to be faithful.

Today, he starts with a story from the Pilgrim’s time on the Mayflower. Bradford recounted how halfway across the Atlantic, an overstressed ship beam cracked.

BRADFORD: And one of the main beams in the mid-ships was bow-ed and crack-ed, which put us in some fear that the ship would be unable to perform the voyage.

A giant screw jack saved the day. The device was actually part of a typesetting press—used to clamp inked typesetting fonts onto paper. But the crew repurposed it to hold the beam in place.

BRADFORD: There was a great iron screw, we brought with us on the island, which raise-ed the beam into its place. And so we committed ourselves to the will of God and resolved to proceed.

William Bradford actually wrote Of Plymouth Plantation in the third person, as a reporter. But to make them more personal, David tells his stories in first person.

In order to accurately portray Bradford, David learned the Pilgrim's unique dialect. A fusion of English, Dutch, and the group’s own way of pronouncing words. They said the silent K’s in know—like K-no. And separated out past tense -ed endings. They liv-ed in Plymouth.

BRADFORD: If you really listened to what they actually sounded like, you probably would have a hard time understanding it. It was really thick.

David got interested in his famous ancestor when he was a homeschooling dad of four. One of his sons loved history and kept asking questions about William Bradford. And so David began to learn.

He discovered that William Bradford had a tumultuous childhood. He was born in 1590 in Yorkshire, England, and by the time he was 7 he was an orphan. Relatives raised him and helped him get a good education...but they also died. By the time he was grown, he had lost 10 close family members.

David Bradford tells the audience that during his difficult childhood, William Bradford developed a deep faith in God and understood the uncertainty of life. His faith didn’t waiver even when his wife, Dorothy, fell off the Mayflower and drowned just as they arrived at Cape Cod.

BRADFORD: God was teaching him don't count on these things in life. They're temporary. And if anybody was a was a Christian man, who knew that and lived his life, saying, I'm here to please God, and to be found faithful with God, and I'm going to live my life that way, because I'm not promised tomorrow. It was William Bradford.

Bradford was a strong leader. The colony unanimously elected him as its second governor when he was just 30. The colony would re-elect him 30 more times.

Bradford led the colony after they’d lost half their number during the first winter in America. He also established democracy and self-government and entered into a peace treaty with the local Wampanaog Native Americans that lasted more than 50 years.

He died at age 67. Before his death, he wrote a poem about his life. David Bradford recites it for the audience.

BRADFORD: He says, from my years young, in days of youth, God did make known to me His truth. In wilderness, he did me guide and in strange lands, for me provide. Off left of them whom I did trust. How vain is to rest on Dust. A man of sorrows I have been, and many changes I have seen. Faint not, poor soul, in God still trust,  fear not the things that suffer must,  for whom he loves, he doth chastise. And then all tears wipes from their eyes,  farewell, dear children, whom I love. Your better Father is above.

David Bradford says the more he studies William Bradford… the more he feels like he knows him personally.

BRADFORD: He was pretty quiet. But very, you know, firm on what he, what he believed in. Very gentle was not an aggressive person, but he could be when he got angry I just feel personality wise he was someone who was easy to follow, because he led by example.

David is doing more and more reenactments these days—getting invites from historical societies, political organizations, and Christian schools curious about why the Pilgrims are significant.

David says he wants to tell William Bradford’s story because he embodies many of the characteristics people need today. Faith in God, virtue, and hope.

BRADFORD: And now I'm 67 years old, which is the age William Bradford was, Governor Bradford was when he died. So it's like, it's kind of a, you know, his life was over. And I'm now taking the baton. And I just want to share what he thought and what he felt was important enough for us to know.