Born into legal limbo in Ukraine 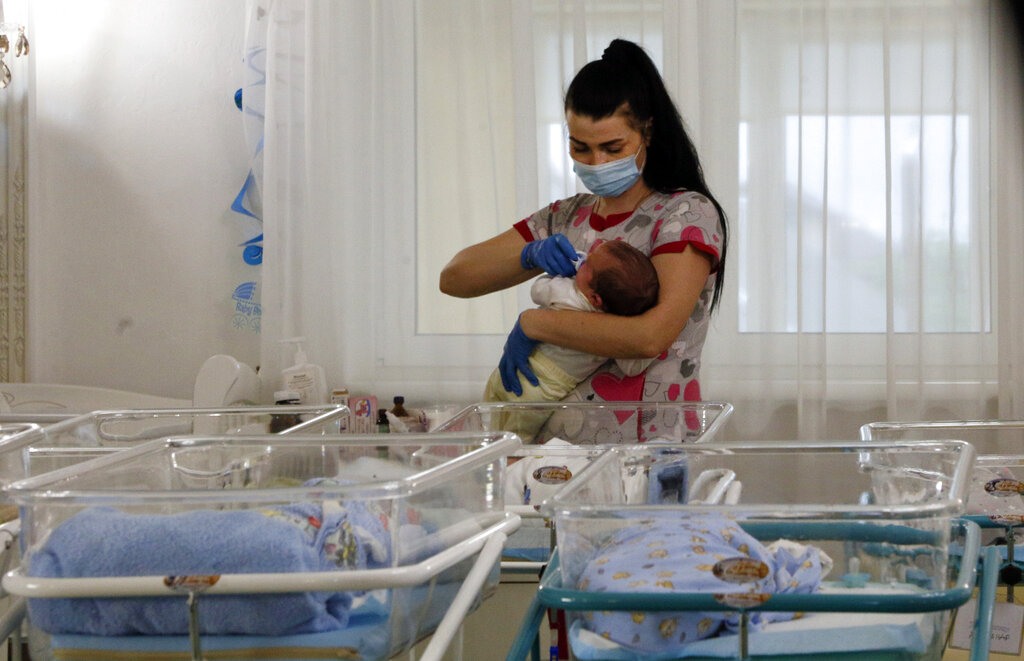 NICK EICHER, HOST: Next up on The World and Everything in It: babies stranded in Ukraine.

Last month, a fertility clinic in Kiev released a video that attracted international media attention. It showed rows of babies in a single room, crying in their cribs. Their mothers were nowhere in sight.

MARY REICHARD, HOST: That’s because these babies’ mothers were surrogates—women who agreed to carry them but not take them home. But the babies’ biological parents can’t take them home either, because of travel restrictions related to the coronavirus.

The plight of these babies has prompted calls to help get them out of Ukraine. But it’s also renewed criticism of the practice of commercial surrogacy. WORLD correspondent Maria Baer has our story.

MARIA BAER, REPORTER: The video produced by the BioTexCom Centre for Human Reproduction was supposed to reassure adoptive parents.

AUDIO: [BABIES CRYING] Our babysitters take care of your babies 24 hours a day in our baby room.

But the calm, dubbed English and the playful piano music couldn’t drown out the sound of the babies. They wiggled in rows upon rows of tiny isolettes, crying.

Albert Tochilovsky owns BioTexCom. He told me, through an interpreter, that the company has hired extra help.

TRANSLATOR: There are 14 nannies, nurses for one shift.

It’s a temporary measure while the biological parents try to make their way to Kiev from their home countries. Tochilovsky says those include the United States, Great Britain, Italy, Spain, and China.

Many couples simply can’t get a flight to Ukraine because of travel restrictions. Some finally made it but had to quarantine for two weeks upon arrival. Before taking the babies home, the parents must take a blood test to prove that at least one of them shares DNA with the baby. Getting those tests is now more complicated. Couples who have already gone through that process are waiting on temporarily-closed government offices to issue passports or travel documents for the babies.

Tochilovsky says he’s glad to have gained international media attention for his clinic’s plight. But BioTexCom’s original video may have backfired.

AUDIO: Every day they spend some time with the children in the open air and bathe them.

Instead of reassuring parents, the video sparked public outrage. Many Western media outlets, including The New York Times and the BBC, have covered the story—focusing on the babies’ plight.

AUDIO: CNN gained access to just one facility in Kiev where tight coronavirus restrictions mean more than 50 babies here can’t be collected by their legal parents.

But no major news outlet has yet mentioned the babies’ surrogate mothers. Foreign commercial surrogacy is banned in several countries, including India and Thailand. Officials there say it exploits low-income women. But it remains a large industry in Ukraine.

Each of the babies stuck in Kiev has a surrogate mother who lives in Ukraine. But Tochilovsky says he would not consider asking them to help care for the babies during the crisis.

TRANSLATOR: No, no, absolutely no, we don’t do this.

He says bringing in the babies’ mothers would be too risky.

TRANSLATOR: I don’t think that the mother, the surrogate mother, should take care of this baby because she will develop the, let’s say emotions to the baby.

But an emotional connection is precisely what newborn babies need, says Jennifer Lahl. She’s a former pediatric nurse who runs the nonprofit Center for Bioethics and Culture. Her organization advocates against surrogacy.

Lahl says whether or not a baby shares DNA with his or her mom doesn’t matter when it comes to bonding.

LAHL: There’s one thing a baby knows when they’re born that you don’t have to teach that baby—they know their mother. They know her smell, her sound, her movements…

Lahl says without physical touch, eye contact, and emotional bonding with their mothers, the babies stuck in Kiev could suffer developmental problems including emotional attachment disorders or learning disabilities.

That could create additional problems for BioTexCom. The company has had cases of prospective parents refusing to take babies home once they discover they have special needs. When that happens, the babies remain in BioTexCom’s custody, parentless and stateless. And the women who bear them have no rights either.

TRANSLATOR: But once she gave birth to the baby she sign the paper that the baby is not hers, so she has no rights for the baby.

Jennifer Lahl says not much research has been done on the long-term effects of surrogacy on mothers. So she’s begun researching it herself.

LAHL: PTSD, I do a lot of work with surrogacy and surrogate mothers and PTSD is a common thing they report to me that they have, and they’ve actually been diagnosed by medical doctors.

On the physical side, Lahl says surrogate pregnancies are inherently high-risk.

LAHL: A lot of women suffer really severe preeclampsia, and preeclampsia has long term damage and harm to a women’s health.

Lahl says the Ukraine story has reinvigorated international calls to stop foreign commercial surrogacy. Ukraine’s Commissioner on Children’s Rights, Nikolai Kuleba, has demanded an end to what he calls an “immoral” practice.

LAHL: Especially with this Ukraine story right under our nose, instead of saying let’s work to abolish this, there may be more states like New York that will want to see this as an opportunity to legalize commercial surrogacy within their own borders.

In early April, New York legalized commercial surrogacy. Just a few months earlier, Lahl testified in South Dakota in favor of a bill that would have banned the practice in that state. It failed.

LAHL: But it’s clear to me that people get weak in the knees when somebody can’t have a baby.

Back in Ukraine, the problem is likely to persist. Despite calls to preserve medical supplies and avoid elective procedures, Albert Tochilovsky says BioTexCom is still hiring surrogate mothers and initiating pregnancies.

TRANSLATOR: Yes we do that because we have the frozen sperm stored in our clinic, so yes we do.

(AP Photo/Efrem Lukatsky) In this photo taken Thursday, May 14, 2020, a nurse takes care of babies born to surrogate mothers for foreign parents in a large room of the hotel where the Biotexcom clinic, the country’s largest surrogate operation, in Kyiv, Ukraine.