Will threats of financial penalties be enough to keep Putin out of Ukraine? 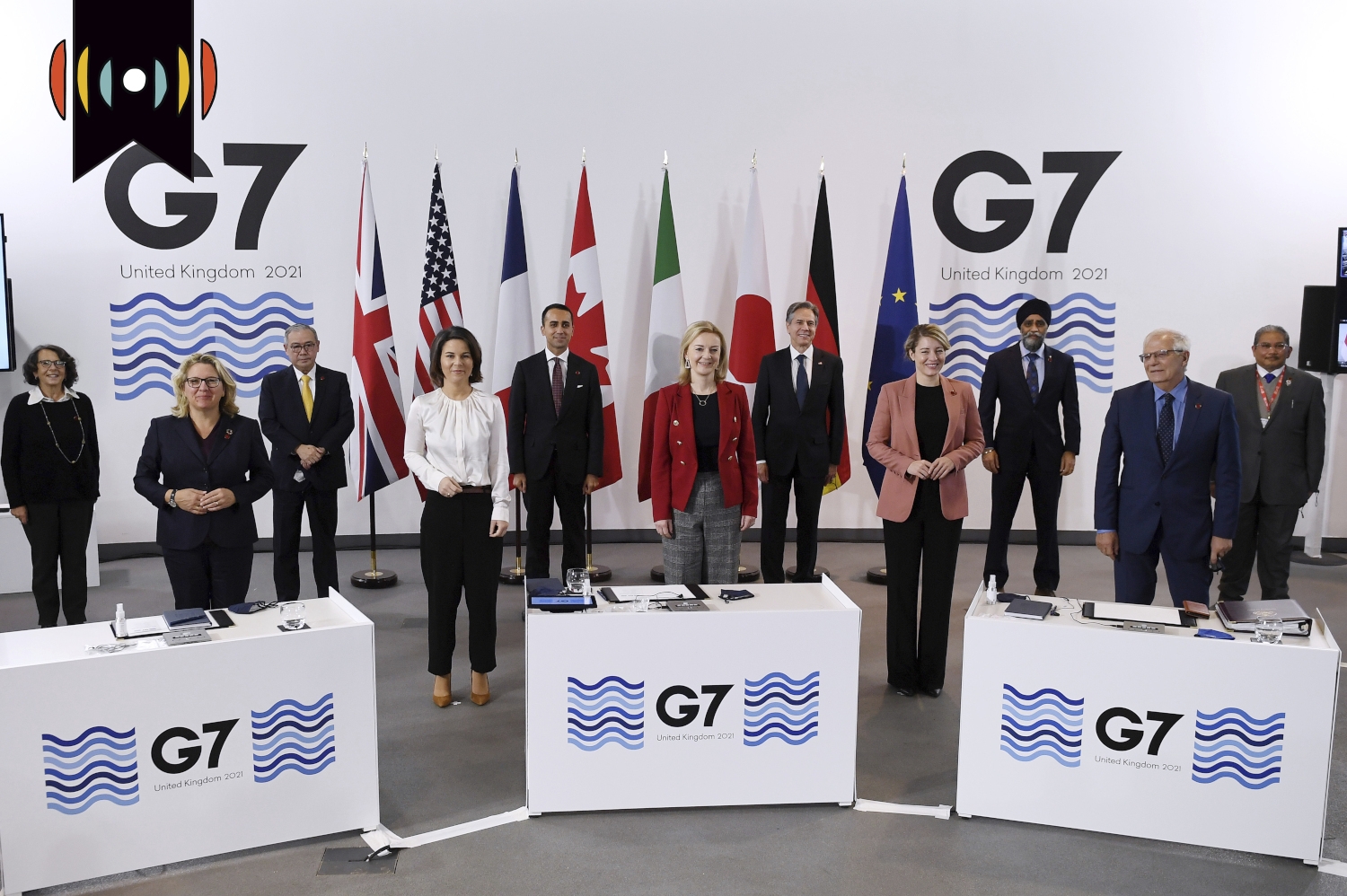 MARY REICHARD, HOST: Up next: heading off a Russian invasion.

The United States and other G7 nations issued another warning to Moscow over the weekend.

MYRNA BROWN, HOST: Seven of the world’s top democratic economic powers met in Liverpool to discuss a range of issues, but none more pressing than the Russian troop buildup along the Ukrainian border.

Seven years after Russian forces invaded and annexed the Crimean Peninsula from Ukraine, President Vladimir Putin could be plotting another land grab.

REICHARD: The “Group of Seven” nations are threatening tough economic sanctions, but not military action.

Will that be enough to deter Putin from ordering another invasion of Ukraine?

Joining us now to help us understand is Cliff May. He is a former commissioner on the United States Commission on International Religious Freedom and president and founder of the Foundation for Defense of Democracies. Good morning to you, sir!

CLIFF MAY, GUEST: Good morning to you.

REICHARD: First of all, give us a brief snapshot of what’s happening along the Russian-Ukrainian border. Some would say that Moscow has already invaded Ukraine by proxy with Russian-backed separatists waging war in Ukraine. What’s happening there?

MAY: So, most worrying is you got about 100,000 Russian troops pressing up against the border of Ukraine. But, as you say as well, in the eastern part of Ukraine, the Donbas region, there have long been Russian proxies, separatists, probably Russians who don't wear insignias on their uniform. And there's been a sort of a state of war in eastern Ukraine going on for years now. And then, of course, there’s Crimea, which as you also pointed out, Putin took away from Ukraine entirely a few years ago. So no one knows for sure what Putin is going to do. The smart thinking I've heard is that if he intends to invade, it probably won't happen until January, maybe late January. Why is that? Because that's about the time when Ukraine kind of goes into a deep freeze. The ground is frozen. That means the tanks to be sent in could go anywhere, not just on the roads, and that would be useful for Putin militarily. Again, I'm not predicting that he's going to do that, but I think it's very much a fear in Ukraine and to many of our European friends.

REICHARD: What would Russia stand to gain by invading Ukraine?

MAY: Okay, important point here. And that is, look, I've been following Vladimir Putin for oh, decades, let me say. Interestingly enough, I was actually an exchange student at Leningrad State University when he was a student there. I can't tell you we hung out together and drank brewskis at the pub on Saturday nights., but here's what I think I do know about the guy. He sees himself as a Latter Day tsar. And what is it that a tsar is supposed to do? He is supposed to expand the Russian Empire if he can. In this case, to at least restore the Russian Empire, which by the way, became the Soviet empire, even as the Soviets were saying, ‘Hey, we're anti imperialist.’ Nonetheless, they took over everything that had been part of the Russian Empire. Core to this: if you're a tsar, your title is Tsar of All the Russias. What does that mean? Well Belarus, headed by Lukashenko, but it's sort of a vassal state already of the Kremlin. And then very importantly, I would say, and perhaps most important to Putin is Ukraine, which he sees as part of historic Russia. You know, back in July, he published an article—whether he wrote it himself, it was his article, he signed it, and I think his pen was certainly on it—and it made very clear that it is his view that Ukraine and Russia are one country that Ukraine never should have been separated from Russia, that this was a mistake that Lenin made when he established the Soviet Union. That it simply should not have its independence. It is part of historic Russia. It is where Russia was born—Kievan Rus', as it was called—and he just doesn't recognize it. Now, if he's going to reestablish the Russian Empire, I think he clearly sees Ukraine as key. He is empire-building. And he is angry (over) the loss of the Russian and Soviet empire. And he sees Ukraine as particularly pivotal in this equation.

REICHARD: As we mentioned, the United States and other G7 countries are threatening tough economic sanctions. How would this differ from the global response seven years ago when Russia annexed Crimea?

MAY: Well, I would say that Secretary of State Tony Blinken is saying that the sanctions this time will be much, much more severe. Things like knocking Russia off the SWIFT system, which is sort of the high tech digital banking system. That would be a tremendous blow to the Russian economy, if we were actually to do it. Putin is calculating all this. He's thinking, ‘Well, I know what they can do to me. But I also know what I can do to them.’ Germany, not least perhaps most, relies on Russia already for energy supplies. Nord Stream 2, which Biden blessed early on, I'm not sure we got anything in return. That's a new pipeline for natural gas coming from Russia to Germany. I think Biden would have been well-served not to bless that. American administration's previously had been against that. And at least say, look, here's what we need to get in exchange, if you want us to let this go ahead, because it's going to make Germany and Europe more dependent on Russia. So, Putin may think you want to play this game? Go ahead. At the end of the day, I think when the cards are on the table, I win the hand, I win the pot. But I don't know, he also may just be you know, this could be a bluff. It's very hard to tell with him. He's asking for a couple of things that I don't think the Biden administration can give him. He's saying, I want to guarantee that Ukraine will never be in NATO, that there will never be NATO forces in Ukraine, and not even NATO weapons in Ukraine. I don't see how President Biden can say, ‘Yeah, I promise you that for all times,’ even though—and this is where I disagree with a lot of analysts—a lot of analysts say, ‘Oh, Putin is afraid that Ukraine will join NATO.’ Well, to join NATO, you need unanimous consent from all 30 NATO members. Germany doesn't want Ukraine in NATO at this time. I don't think President Biden wants it and a lot of other countries wouldn’t. The Germans actually have Merkel, Angela Merkel, the outgoing chancellor, she's blocked NATO weapons to Ukraine, which the idea of sending them in was so that the Ukraine can defend itself, which I think it has a right to do.

REICHARD: Okay. So the odds of Ukraine joining NATO are pretty slim.

MAY: Zero, in my view. Again, you need unanimous consent from all the NATO members. That's just not going to happen. And Putin would see that as a red line, by the way, I think and say, ‘Oh, you're going to do that? Then I am going in. Let's see if you stop me. And how would that work to stop me? You really think you’re going to see German troops coming into Ukraine to fight Russians? The biggest military, of course, in NATO is that of the U.S. But the second biggest military is that of Turkey. Do we really expect to see Turkish soldiers fighting Russians in Ukraine? I can't imagine that. And I don't think that's at all plausible. I don't think Putin thinks it’s plausible.

REICHARD: You said earlier that Putin is “empire building.” Talk more about that if you would. Explain what his ultimate endgame here is.

MAY: Yeah, to reestablish the Russian Empire, to make Russia an important and more important power in the world than it has been at following the fall of the Soviet Union, which he sees as a terrible tragedy of the 20th century. Not because he's a communist. He's not. But because it was about Russian power, and Russian power was expressed through the Soviet Union. So he's done other things, too. He sent his troops into the Middle East, into Syria. President Obama said, ‘Oh, you don't want to do that. It's a quagmire.’ He thought, ‘For you it's a quagmire, not for me.’ And what did he achieve? Well, he's got a warm water port in Syria, on the Mediterranean, which he wanted. And he is seen as a power broker in the Middle East by pretty much all of the players. So he's achieved that. He wants Russia to be a major power in the world and he thinks most Russians want that as well. And if he can achieve that, there'll be some more support for him. The economy is not great in that country for lots of reasons. But he is showing that he is a powerful player, and plenty of Russians do like to see that. I don't think he's necessarily wrong in his view. But I think it's also, you know, he's got more money than he could ever spend. He has more power at home than ever. I think he wants to increase his power and Russia's power as much as he can. I think he thinks that's his job and his mission. I firmly believe that.

REICHARD: Cliff May with the Foundation for Defense of Democracies has been our guest. Thanks so much!