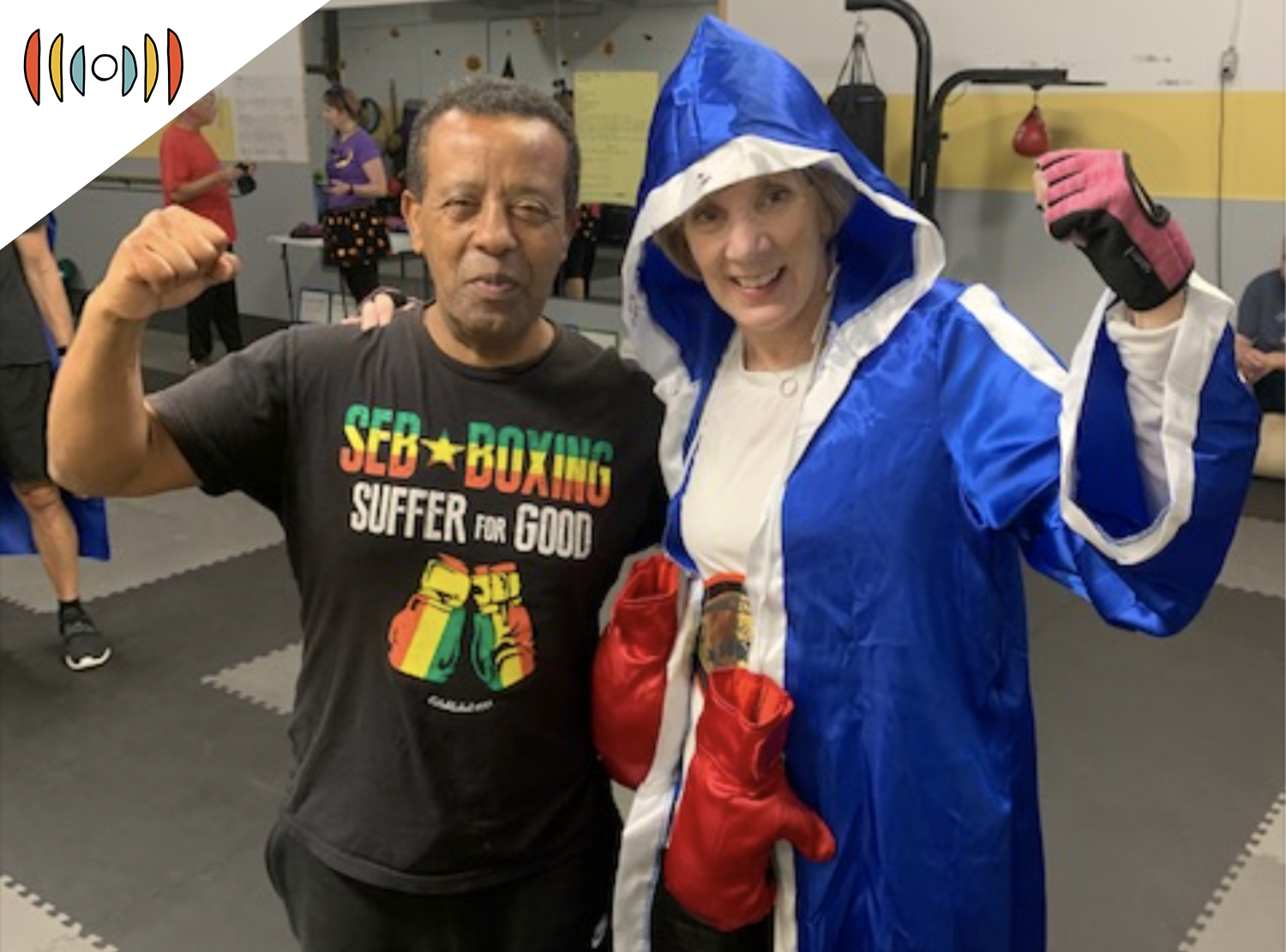 Each year, about 60,000 Americans are diagnosed with Parkinson’s disease. For many, the brain disorder progresses to the point where daily tasks become difficult. But there is growing evidence that exercise improves symptoms. One in particular has really caught on: boxing. Here is WORLD correspondent Jenny Rough with the story.

JENNY ROUGH, REPORTER: On a Tuesday afternoon, a 74-year-old woman shuffles into a boxing gym in Franklin, Tennessee. Her gait is wobbly, but she makes it to the middle of the floor. She wears black yoga pants, a black t-shirt, and a pair of pink Ringside boxing gloves. The kind with Velcro straps, not laces.

The woman is my mom. She has Parkinson’s disease. Zewdie began working with her not long after her diagnosis three years ago.

A growing body of evidence suggests that non-contact boxing may slow Parkinson’s symptoms. Zewdie’s students punch paddles and bags, not one another.

Zewdie learned to box as a boy growing up in Ethiopia. He played other sports, too.

ZEWDIE: When I was a little kid, I used to play Ping-Pong and basketball and soccer and running.

He worked out at the YMCA near his home. A coach who trained elite athletes noticed Zewdie’s passion and talent. The coach told Zewdie he was good enough to be an Olympic athlete.

ZEWDIE: He said, “Seb, you are a great athlete. I want you to choose one sport that can take you to the Olympics.”

At the time, Ethiopia had three summer Olympic sports teams: track and field, cycling, and boxing. Zewdie says he wasn’t fast enough for track. Cycling? Too expensive. That left boxing.

He awoke every morning at 5:30 a.m. to run. Then headed to practice. His first of three for the day. He attended school at night.

ZEWDIE: I focused 100 percent of my power, my energies, to be on the Olympic team.

At 18, he was heading to the 1984 summer Olympics games in Los Angeles. Or so he thought. It was the Cold War. In May, the Soviet Union announced it would boycott the summer Olympics. One by one, Soviet allies followed, including Ethiopia.

ZEWDIE: I mean, just that one just shattered all the dreams. And after that, you know, I just, I don’t have any life, no dreams.

Boxing matches had taken their toll. Zewdie kept coughing up blood. He learned he needed heart surgery. Three years after his dashed Olympic dreams, he came to the United States for the operation, and stayed. He worked as a limo chauffeur and taught boxing to professional athletes and celebrities.

One day, a doctor showed up for lessons. Zewdie asked what motivated him to box. The doctor said his Alzheimer’s specialist sent him. The doctor had little coordination and a lot of confusion. When Zewdie asked him to punch right, the doctor punched left. But with each lesson, the doctor improved.

ZEWDIE: I said “Wow!” I said, “The workout really helps him a lot for his coordination” … And I was surprised.

That experience opened Zewdie’s eyes. He could use his skill for a new purpose. Today, he dedicates much of his work to Parkinson’s students. Like my mom.

Another one of Zewdie’s students: 69-year-old Christy Tudor. Two and a half years ago, Tudor noticed a tremor in her left hand.

CHRISTY TUDOR: I was playing on my phone. And I noticed my hand was shaking, you know. I'm going, Oh, gosh, I've got some computer, play Nintendo disease or something, you know, that people are on their phone too much.

TUDOR: As I walked, my left foot would drag.

Soon after, a Parkinson’s diagnosis. Her doctor gave her a prescription for medication. And this advice:

TUDOR: He says you've got to exercise and exercise hard. … Your brain will get the signal to your muscles to move and to do things.

So Tudor joined a boxing class.

ZEWDIE: Boxing is really helps for everything. It helps for your coordination, for your speed, agility, strength, and your balance, for your stamina.

All that can help prevent falls, a high risk for Parkinson’s patients. But the benefits are not limited to physical fitness. The exercises help with brain function, too. Instead of calling out the combinations—jab, cross, duck, hook—Zewdie makes his students memorize them.

TUDOR: That's the hardest part for me. I think for everybody, you know, switching combinations.

About a year after she started boxing, Tudor noticed significant improvements. No more hand tremor. No more foot drag.

TUDOR: And so that has stopped. Since I've been boxing, almost all my symptoms have gone away.

My mom’s symptoms have not improved quite as dramatically. She can no longer drive. Or cook. She never knows what she will face each day.

Zewdie says back when he trained for the Olympics, his coach used to say: “Suffer for good.” For a long time, he didn’t understand that—he just wanted his suffering to end. Now it’s what he teaches his students: Everyone suffers. Don’t waste it.

ZEWDIE: Most of us now, we don’t like to suffer. We give up.

Instead of giving up, push through. Use that suffering to build strength—not only strength of body, but strength of character and faith.

ZEWDIE: Go. Speed up. Push it. You got this. Good job. C’mon! Suffer for good.