One year after a massive port explosion, Lebanon struggles to rebound

A relative of a victim who was died in the last August 2020 devastating Beirut Port explosion, adjusts his portraits over plants as part of their campaign to push for justice in Beirut, Lebanon, Sunday, Aug. 8, 2021. Hussein Malla/Associated Press Photo 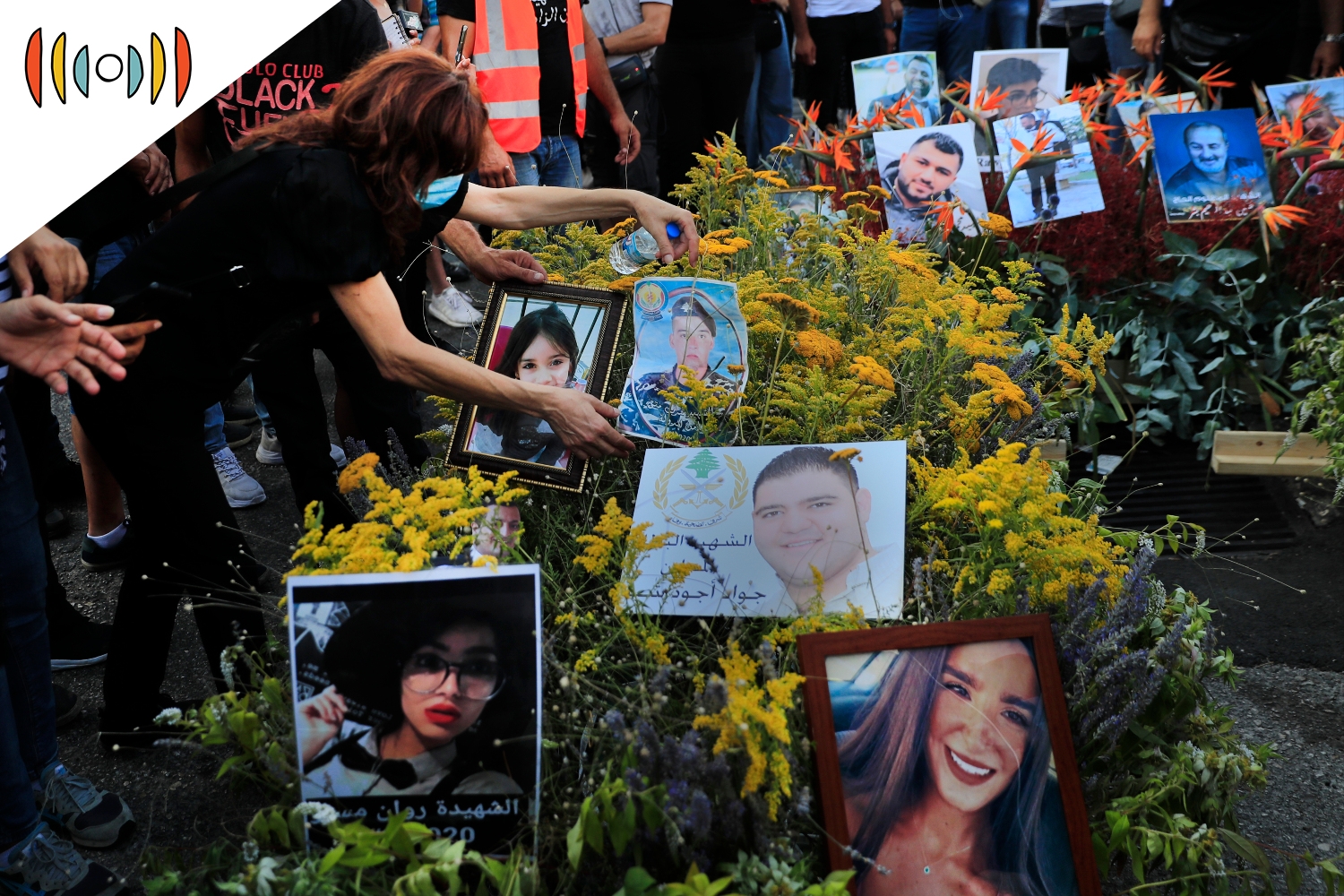 MYRNA BROWN, HOST: Coming up next on The World and Everything in It:

A year ago a series of massive explosions rocked the seaport in Beirut.

People living in Lebanon’s capital looked on at the first explosion from what they thought was a safe distance. Then, a more powerful blast occurred, shooting a giant mushroom cloud into the sky.

MARY REICHARD, HOST: That blast overturned cars and blew out windows for miles.

The explosions on August 4th killed more than 200 people and injured thousands of others.

It caused billions of dollars in damage. It devastated a country already struggling to manage the pandemic and the economic fallout from that.

So what’s been learned? And where do things stand in Beirut today?

REICHARD: There have been multiple investigations, both internal and from outside groups, over the past year. What have we learned about what caused the explosions?

BELZ: Well, we know that it was from a warehouse at the port that was full of ammonium nitrate. We know that had been offloaded from a confiscated ship back way back in 2014, that it had been stored haphazardly there for all that time, you know, right next to the country's grain silos, right next to one of the largest ports in the Middle East. The blast itself has been measured and tested and reviewed by experts over this past year. They compare it to the force of a nuclear device. It was that powerful. And so we know that it was one of the largest non-nuclear explosions in history. I'll say this, Mary: I arrived there just a few days after the explosion to cover the aftermath, and I was taken to a quarantine hotel. And it was six miles from the blast site, and when I arrived at the hotel, this wall of glass in the lobby had been completely blown out. And I think that gives you kind of a graphic picture, six miles away from the port, this city was still facing devastation.

REICHARD: And what do we know about how something like this could happen and what led up those explosions?

BELZ: Well, I'll quote the prime minister who I think said it best. He called it a system of corruption, bigger than the state. We really are looking at a tragedy and at a disaster and at a crisis that came about because of government mismanagement, and just a corruption at an incredible level. Beirut, people refer to as the Paris of the Middle East. It made this incredible comeback from civil war in the 80s. And they had rebuilt the seafront and businesses are flocking there. Just a remarkable, remarkable city in that part of the world. But over the last decade, we've seen Hezbollah grow in power and to gain respectability—because remember, this is a terror organization. It has linked hands with crony elites in the government. And what we've had is a government that was essentially being run as a mafia type organization. They knew the explosives were there in the warehouse. They knew that they weren't properly stored. And, you know, at a minimum, they were criminally negligent. One eyewitness, a Lebanese Mom, you know, I think said it best. She said, essentially, they killed us from the inside.

REICHARD: You alluded to this a little bit earlier about how the country, and how Beirut in particular, used to be. Since these explosions last year, how has the country changed?

BELZ: Well, many people were hoping that this would be a wake up call. It was this incredible, startling orange explosion that blew across the city. And world officials were all calling for a massive effort to help Lebanon to recover from this. And people thought it would be a good wake up call that the government would maybe come down, that things would happen. Remarkably, not much has happened. We haven't seen the international response come together like we thought it would. I will say that it's been remarkable to watch the homegrown effort that has come up in its place. There were these broom brigades that people just put together on their own. People were literally cleaning glass and rubble out of their own streets in their own houses. Restaurants were setting up in the streets to serve those workers. And that has continued to be sort of the way that Beirut is recovering. It's very spotty. It's not very good, but it is what they've had.

REICHARD: What are you hearing from people living there? What are they talking about?

BELZ: I think sadly, as much as people have come together to help one another to recover, that what they're seeing, especially at this moment, at this one year anniversary moment is that they are worse off in almost every way than they were before the explosion. The economic crisis that preceded the explosion has only deepened. One of the other things that's really developed since the explosion, that's been incredibly worrisome is the increase of power outages. The major utilities were, you know, not surprisingly, located along that waterfront. Some of them received extensive damage. So that is where things are right now. It's not a good scene.

REICHARD: Final question, Mindy. How have Christians and ministries responded over the past year to this disaster?

BELZ: That really is a powerful part of the story. Many of the churches and Christian ministries were located near the port because that's where the old Christian neighborhoods of Beirut are. And they had to get busy, first of all, repairing their churches and rebuilding their own neighborhoods. But then they just continued. And keep in mind these churches have been a very important part of helping to support Iraqi refugees and Syrian refugees who have been in the country inside Lebanon, more than a million of them, for the past decade. And so now they've turned their attention—these churches are sort of—you could say their muscles are exercised. And so now they've turned their attention to helping fellow Lebanese, and they're doing amazing work. One group that I know is working with 1,200 Lebanese families to help repair their homes to help give them food parcels and the kinds of things they need to get by. One group told me overall, when you look at the big picture, things have gotten worse. But when you focus on the opportunities God is presenting to reach new people with good news, things are incredible right now.