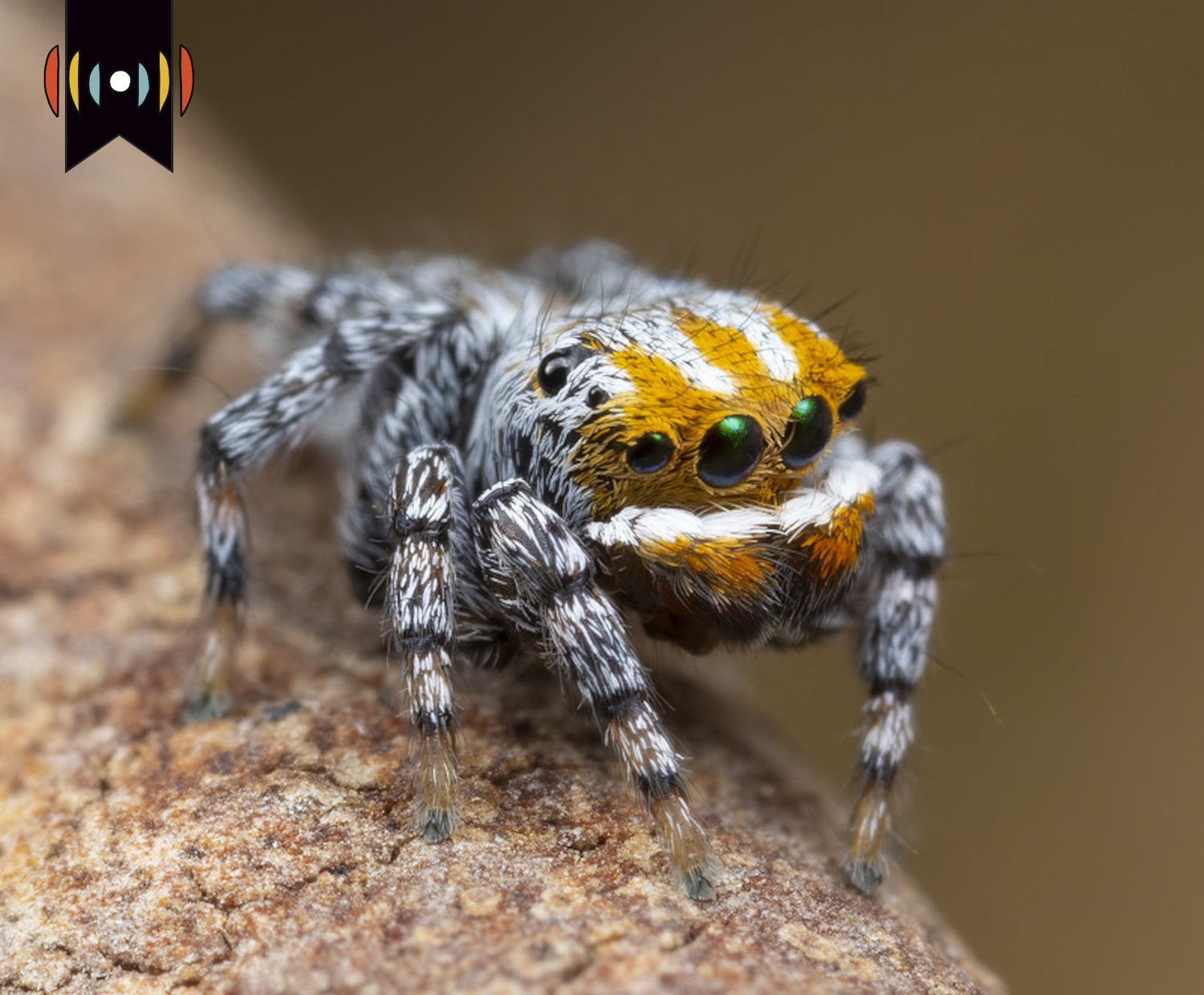 MARY REICHARD, HOST: And I’m Mary Reichard. Coming next on The World and Everything in It: spiders!

A few years ago, several videos of some colorful spiders went viral. One of them shows a spider dancing as though wearing a sombrero and playing maracas

Another one has a spider wielding lightsabers.

They’re peacock spiders native to Australia and they’re about the size of a grain of rice. WORLD correspondent Amy Lewis caught up with the man who recorded the original videos to find out more about the spider under the sombrero.

OTTO: How do I best describe a peacock spider? It is a small spider between 2 and 4 mm long in general.

And no one knew why they were so colorful.

OTTO: And they are a part of the jumping spider family. They have big front eyes, they’re very visual things, and they catch their prey by jumping at it. And they got their name through a strange habit that no other spider has.

Jürgen Otto is a peacock spider expert. He moved from Germany to Queensland, Australia to study marine mites in the Great Barrier Reef. While there, Otto discovered and named about 200 new mite species. That’s a lot, but he says not many scientists were looking for them. He was.

His habit of looking for small bugs took a new turn when he and his family moved to Sydney. He took up wildlife and flower photography as a hobby.

When a friend invited him to visit a national park, he grabbed his camera.

OTTO: I found one of these spiders accidentally, almost stepped on the spider and started to photograph it. I got intrigued by some colors that I saw and started to investigate what kind of spiders’ might have been…

Scientists called it a flying spider. They thought colorful extensions on its abdomen helped the spider glide through the air. But Otto suspected the males used them for courtship. All he needed was a female spider.

OTTO: It took me three years to actually find one. And the females were also unknown at this stage. And you need to get females and males together for anything to happen.

He created a habitat on his desk with leaves and sticks and added the male and female spiders. Then he watched as an exotic miniature courtship dance began.

OTTO: You can imagine a peacock unfolds his feathers, it’s exactly what a peacock spider does in effect. They have these flaps they unfold. They elevate their abdomen to display these flaps. They usually raise a third pair of legs and move that around. In fact, the whole spider starts moving around. It’s like a dance. And they do this to impress a female. It’s a courtship ritual.

If the male’s dancing doesn’t impress the bland-looking female, she might show him eight cold shoulders. If she’s already mated and hungry, the colorful male takes the risk of being her next meal.

Otto began photographing and videoing the tiny spiders’ display. He started a Facebook fan page. He created a peacock spider website and posted videos of their dances online.

OTTO: All of the sudden, somebody, me in this case, brought it to the world’s attention. And people just were completely surprised by it. How can this happen? In fact, for quite some time, people kept telling me that I’m making this up.

The natural wonders of creation sometimes get eclipsed in a world of fake news and altered reality.

OTTO: People couldn’t believe it and, I mean, I guess that’s part of my fascination about these spiders as well, is that in fact, what you see there is quite unbelievable. It’s something that you wouldn’t expect to happen. And when you see it, you’re surprised by it, and you’re fascinated by it. You start telling other people about it and want to document it.

Since then, Otto and colleague David Hill have documented about 50 more species of peacock spiders. They display colors and patterns in the shape of an elephant’s head or Van Gogh’s ‘Starry Night’ painting. Even their dances are different from each other. One has the endearing nickname of Sparklemuffin.

OTTO: Birds of paradise are known to be flamboyant, colorful like these spiders. They do similar sort of dances, as peacock spiders do, similar kind of courtship ritual. But we know they’re birds, like they’re vertebrates. We associate intelligence with birds. They’re much larger. So, seeing a bird doing this kind of doesn’t surprise us anymore. Yeah, we’re used to it.

We don’t expect similar behaviour from something we could accidentally step on.

OTTO: Just this thing that they’re spiders is something kind of weird to people. Like spiders are something, something ugly, something to be feared of. They look in the corner of the room on a window. They’re unattractive. But yet, then you show them something that is the absolutely opposite and, yeah, it becomes unbelievably fascinating.

It’s not just the spiders’ dances that fascinate people. The unique microscopic structures of their colorful scales can display a rainbow’s full spectrum depending on the angle. Some species have a patch of non-reflecting ultra-black on their backs.

OTTO: There’s interesting things to learn from them. I guess we’re just at the beginning of understanding how these colors work.

The recent discovery of these intriguing creatures brings to mind Proverbs 25:2 that says, “It is the glory of God to conceal a matter; to search out a matter is the glory of kings.”

Clinton Berends pastors South Barwon Christian Reformed Church in Geelong, Australia. He’s not a spider enthusiast. But he enjoys all of God’s creation, from the Australian Outback to the tiny features of his garden.

BERENDS: We know that there is structure and order behind it because God created it. It’s not just, it’s not just random. At school I was a bit of a science and maths nerd but what I loved was reading the history of exploration of biology, of physics, and all those things which become possible because, you know, God created it and he put order in it and has given us a mind to explore all of these things. That’s a tremendous privilege.

Even though Otto has done so much work with peacock spiders, he keeps looking for new things. And he recommends keeping your eyes open wherever you live.

OTTO: A few years ago, actually, I found myself a new species of jumping spider in Australia that wasn’t a peacock spider. And I can tell from my experience that it’s probably at least as interesting, even perhaps more interesting than peacock spiders. It’s something that I would never imagined. You’ll find something interesting if you keep looking. You don’t know what it will be.

You might find it unexpectedly when you’re looking for something else.