A walk through Plymouth

WORLD Radio - A walk through Plymouth 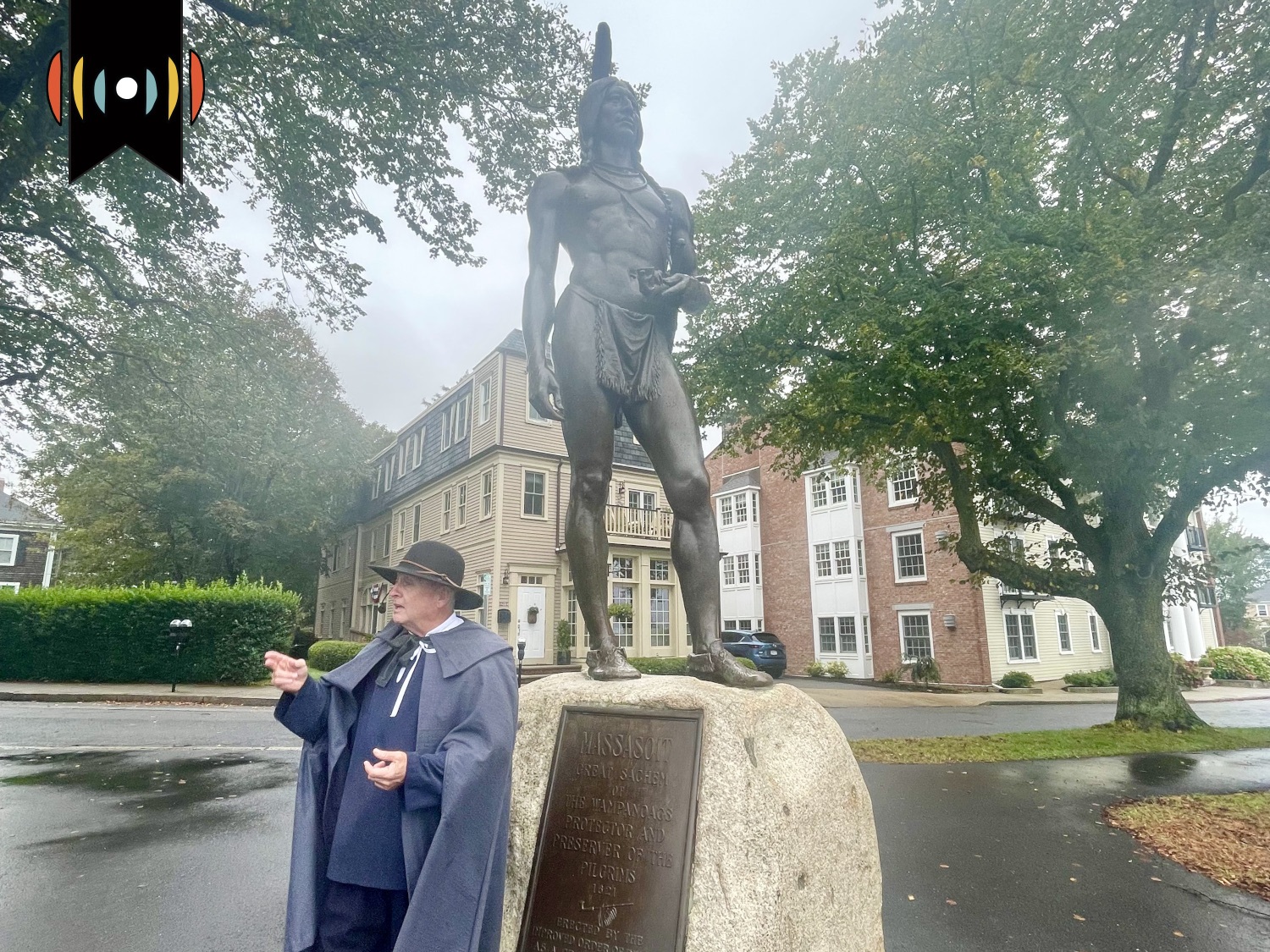 NICK EICHER, HOST: Coming next on The World and Everything in It: a visit to the birthplace of Thanksgiving.

Last year marked the 400th anniversary of the start of Plymouth Plantation on the shores of the Atlantic. But local officials postponed the quadricentennial celebrations due to COVID. So this year Plymouth, Massachusetts, is making up for lost time.

MYRNA BROWN, HOST: WORLD’s Special Correspondent Sarah Schweinsberg visited the old city earlier this fall with a Pilgrim reenactor and tour guide to find out what the colony was like.

Of course, things looked a lot different here in 1620. Peter Martin's job is to take people back to that time.

MARTIN: If you have a question, go ahead and ask the questions as we go along.

Martin has been giving historic tours of Plymouth for years. He wears an all-black pilgrim-style outfit with a black cape and a black-brimmed hat shielding his face from the falling rain.

MARTIN: This is a lot warmer than the pilgrims encountered when they came there. I'll tell you that.

He starts his tours by a stream flowing through the center of town called Town Brook.

The rushing, brown brook eventually flows into the ocean. It doesn’t seem all that remarkable, but it’s actually a key reason the Pilgrims decided to settle here.

MARTIN: This stream offered them three things. Not only did it offer them a freshwater source, it offered them fish. In springtime, this is a herring run…

Native Americans showed the Pilgrims how to fertilize their crops with the herring. And the stream offered something else: energy. In 1636, the Pilgrims used the stream’s rushing water to build a corn-grinding mill.

MARTIN: The Town Brook drops 80 feet in under a mile… So they knew that would be a great thing to have.

Martin leads his group of 20 tourists downstream toward the ocean. As he walks he explains that the Pilgrims had another attraction to this location. Instead of thick woods, they found open fields ready for planting.

A village of Wampanoag Native Americans had called this place home up until just a few years before the Pilgrims arrived.

MARTIN: And they had completely died out… And the reason they died was a disease probably around 1615-1616.

They caught the illness from previous European explorers who traveled through the area.

Eventually, the Pilgrims paid other Wampanoag for the land and the two groups entered into a peace treaty. The Pilgrims supplied the tribe with weapons to defend themselves against rival tribes… and the Wampanoag gave the Pilgrims food and knowledge of the land.

MARTIN:It was the longest lasting, lasting peace treaty in the history of the United States, and lasted 55 years. So what we’re going to do is zip up this side street…

Martin comes to a stop on the sandy seashore. There a large white portico with tall pillars stands over a famous landmark: Plymouth Rock. It’s a boulder the size of a bathtub with 1620 engraved on it.

There isn’t rock-solid historical evidence that the Pilgrims actually stepped on the stone when they landed here. But Peter Martin says it’s still important because it represents the Pilgrim’s values of liberty, faith, and equality. He quotes a speech that President Calvin Coolidge gave about Plymouth Rock.

MARTIN: Plymouth Rock marks neither a beginning or an end. It marks a revelation that's without beginning and without end. A purpose, shining through eternity, like a resplendent light undimmed even by the imperfections of men.

JENKINS: We're going to walk up Leyden street in a little while…

The steep street runs uphill from the shore. It’s where the Pilgrims built their first homes: simple wooden houses with chimneys and thatched roofs.

The Pilgrims called it First Street but the town changed it to Leyden Street in the 1800s. Leyden was the Dutch village the Pilgrims lived in before coming to America.

MARTIN: So Leyden Street was the center of the plantation.

All of the original buildings are gone. But plaques mark who used to live here. Names like William Bradford, Edward Winslow and John Billington. The first structure the Pilgrims built was a common house at the bottom of the hill.

MARTIN: Now a common house was a house not owned by a single family. It was common to the community. But they were all living on the Mayflower. And they needed a place to start offloading some of them from Mayflower.

Another house at the bottom of the hill belonged to Samuel Fuller.

MARTIN: He was the physician on the Mayflower.

A little further up the street lived John Carver and his wife. But they both died in the Spring of  1621, soon after the house was built. So it went to their servant, John Howland who married Elizabeth Tilley. The couple would have 10 children. Today, two million Americans can trace their lineage to the Howlands.

MARTIN: You know some of his descendants. George W. and George H. W. Bush… Franklin Delano Roosevelt was a descendant of John Howland. Teddy was too.

At the top of Leyden Street, Martin points out another famous landmark.

MARTIN: Now, if you look to the right, this is Burial Hill.

Burial Hill is one of the oldest cemeteries in the country.

MARTIN: A number of the Pilgrims are up there. William Brewester, William Bradford, John Howland…

Before it was a cemetery, it was the site of the colony’s two-story fort. The hill offered the highest point to overlook the town and the bay.

JENKINS: You’ve got to remember the British were at war with the French at the time the Pilgrims came here, so they wanted to make sure they could defend themselves.

As Martin tries to give people an idea of what it was like to be a Pilgrim first arriving on these shores… visitors take home different lessons.

Many like Nick, a 20-something, have never really learned about the Pilgrims.

NICK: I'm from Massachusetts, I've been here my whole life. I don't even think like, I, I haven't actually came here before.

He was inspired by the Pilgrims’ ability to carve a life out here with the help of the Native Americans.

NICK: So just being able to be more, I guess, self-reliant, I think is a quality that I think people should be more focused on today, rather than having to, you know, get everything around them to make their life easier.

Other tourists like Ingrid look back at the colony and recognize how it helped shape her world today.

INGRID: They wanted freedom. And so they came here. And they found it. And you know, they wanted a bottom up government, not a top down government. And so they were able to establish their own government. So I give them all the appreciation for their courage and their faith and their strength, for coming here and doing what they needed to do under the most incredible odds.