We have lift off again—and wonder

A launch into space and the power of memory

At first, you hear nothing, and all you see is an explosive cloud of smoke. Then you see the fire, appearing to be brighter than any light on earth. Then you see the rocket lift from the launch pad and slowly rise. Once aloft, the rocket gains velocity and streaks upward, with powerful flames and trailing clouds. Eventually the cloud becomes a line drawn in the sky. Only then does the noise arrive, shaking the earth as the rocket departs the planet.

My boyhood in central Florida was shaped by the Space Age, the Cold War, and the American Dream. Cape Canaveral and what become known as the Kennedy Space Center represented the epicenter of America’s race into space and the age of the rocket. Most launches took place without announcement, since they were classified missions carrying classified cargo. We would be playing outside and someone would yell, “launch.” And there it was. We knew which direction to look.

My friends and I played war, constantly. It was a simpler age, and when I was ten I asked for a toy bazooka from the Montgomery Ward catalogue for Christmas. I got it. These days, a boy asking for a toy bazooka would be sent for counseling. I guess it also seems odd that a department store sold such a toy. But, we were at war. That war extended to outer space. With the U.S. Air Force Strategic Air Command’s installations all over the state’s peninsula, my friends and I playing war seemed to have constant air cover for our games. We just made the rocket and missile launches part of our drama.

The Apollo launches were epic, and Apollo 11 would eventually fulfill the late president’s pledge to “commit itself to achieving the goal, before this decade is out, of landing a man on the moon and returning him safely to earth.” The space launches were announced to the public and covered by the television networks. I witnessed the Apollo launches (and was frustrated by seemingly endless delays and launch cancellations). It was worth it. The massive multi-stage Saturn V rocket was the wonder of the world. When the first Apollo launch took place, my boy cousins and I stood on the front porch and held a long piece of aluminum foil to the “rabbit ear” antennae of the black-and-white television set so that we could see both the launch, just miles away, and the television coverage. Walter Cronkite told us what was happening. Our eyes confirmed it. We did not have a mental category for 7.5 million pounds of thrust. I guess I still don’t.

Sunday evening, Mary and I took our grandchildren to see the launch of the SpaceX Falcon Heavy rocket at the Kennedy Space Center. The two boys are about my age when the Project Mercury program was reaching its end and the Gemini program was beginning. Our granddaughter, not yet two, was more fascinated by a horseshoe crab carcass than the rocket launch. I was a boy again, waiting for the thrill of the launch. Sunday evening was perfect for the launch, and it went off perfectly, so far as we know.

The lift-off was visually stunning. The SpaceX mission was under secret assignment to the U.S. military and its Space Force, simply identified as classified mission USSF-67. But there was no hiding the launch of that rocket, which combined the strength and thrust of three SpaceX rockets. It streaked upward and then across the sky. Sure enough, the sound came with deafening force. You can feel it, but the rocket escapes our planet’s atmosphere so quickly. Then, you hear nothing, even as the bright rocket grows smaller and smaller. 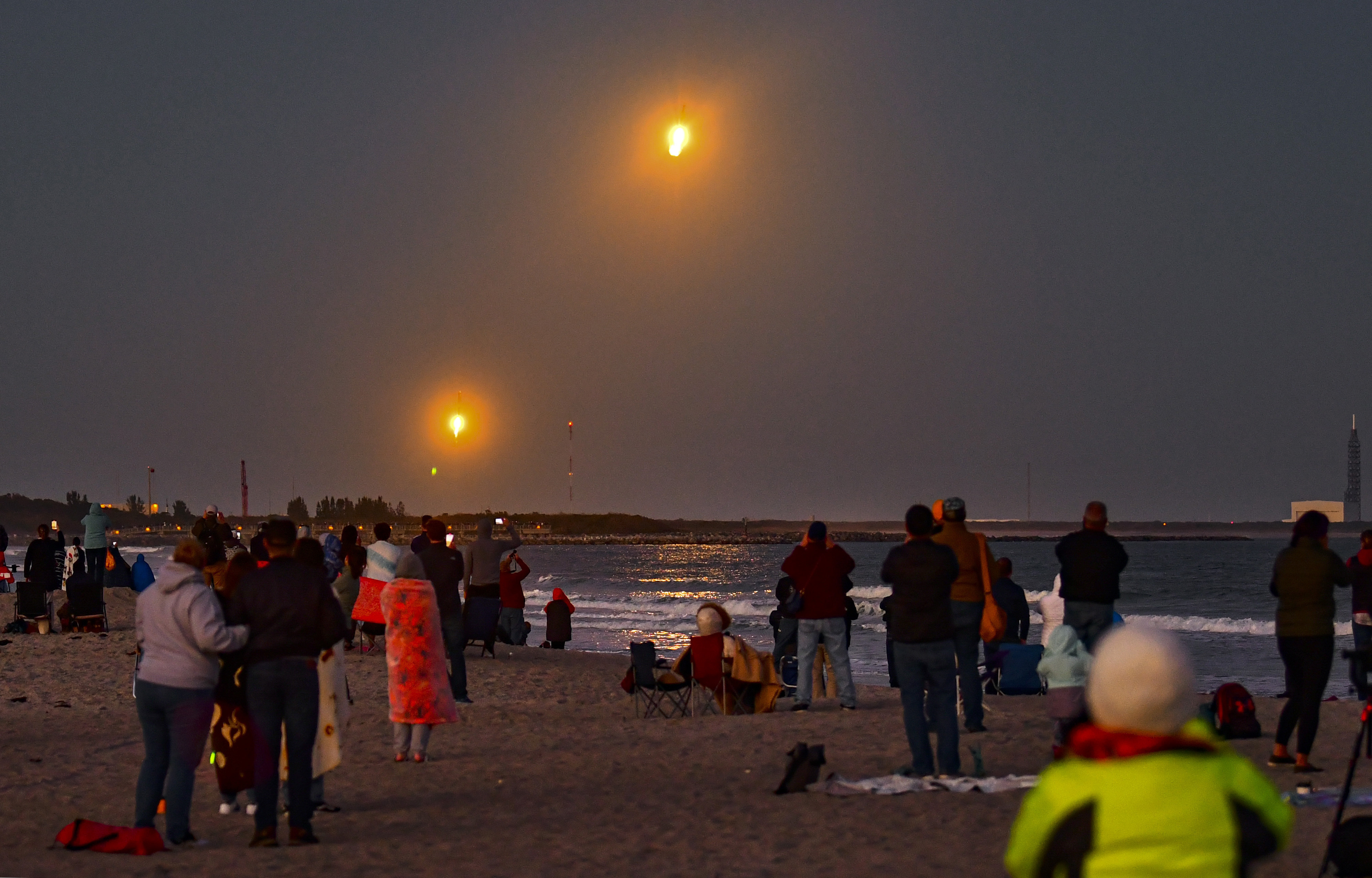 Unlike the launches of my boyhood, there was more to see. It took just a few minutes for the rocket engines to return to earth, firing engines to brake their final descent, landing upright. Back in the days of the Saturn Vs, the rocket stages fell into the oceans or burned up in the atmosphere. Landing an engine upright? What a world.

Human beings are perfectly capable of destroying things. Every technology can be used for good or for evil. The Cold War was all about the good guys getting to the moon before the bad guys, the communists. There was more to it of course, but morality was central to the story. It always is.

But humans are also capable of building things—even magnificent things. Americans take great pride in being particularly good at it. We get many things wrong these days, but if your heart does not skip a few beats when watching a giant rocket race into the skies, there is something wrong with you.

There is also something spectacularly right about watching such an event with your grandchildren. The 10-year-old me who witnessed the Apollo 11 launch did so with my paternal grandfather. Somehow, he felt close as my own grandchildren watched the wonder. For a few minutes, I was a boy again—a very proud American boy. And standing there with family, I was thankful. Unspeakably thankful. And I hope I never stop looking up to the skies in wonder.

Albert Mohler is president of The Southern Baptist Theological Seminary and Boyce College and editor of WORLD Opinions. He is also president of the Evangelical Theological Society and host of The Briefing and Thinking in Public. He is the author of several books, including The Gathering Storm: Secularism, Culture, and the Church. He is the seminary’s Centennial Professor of Christian Thought and a minister, having served as pastor and staff minister of several Southern Baptist churches.

Read the Latest from WORLD Opinions

The pro-life movement gets to work

Are all persons created equal?

R. Albert Mohler Jr. | Though now reversed, the Supreme Court’s 1973 decision is an enduring wound to the nation